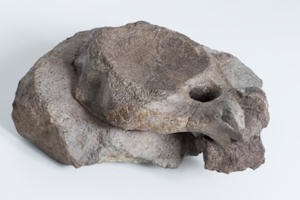 Experts from The University of Manchester have identified Britain’s oldest sauropod dinosaur from a fossil bone discovered on the Yorkshire coast.

The vertebra (backbone) originates from a group of dinosaurs that includes the largest land animals to have ever walked on Earth. This new sauropod dinosaur, from the Middle Jurassic Period at about 176 million years old, was found near Whitby, Yorkshire, after it fell out of a cliff face. This find represents the earliest skeletal record of this type of dinosaur from the United Kingdom and adds to existing evidence from Yorkshire dinosaur tracks that this part of the country was once Britain’s very own ‘Jurassic World’.

Sauropods (often referred to as ‘brontosaurs’) include some of the largest plant-eating dinosaurs to have roamed the Earth and were a successful group for nearly 150 million years. They possessed distinctive long necks and tails, small heads, a large body and walked on all fours. Some species such as the Argentinosaurus grew up to 115 feet (35 metres) long and possibly weighed as much as 80 tonnes.

The fragmentary nature of the new find from Yorkshire means it is not possible to generate a new species of dinosaur. However, this fossil clearly belongs to this distinctive group of titanic sized animals, the sauropods.  This dinosaur fossil is an extremely rare find, given the Middle Jurassic rocks of the world are only exposed in a few areas, such as China and Argentina where similar-aged dinosaur fossils originate.

Professor Phil Manning and his team from The University of Manchester used X-Ray Tomography to study the fossil bone, which is now held in the collections at the Yorkshire Museum in York (UK). They present their description of this new sauropod dinosaur in a paper published today in the Journal PLOS ONE.

“This fossil offers the earliest ‘body fossil’ evidence for this important group of dinosaurs in the United Kingdom, but it is impossible to define a new species based upon this single bone.”Whilst this is clearly frustrating for the team, there is possibly more of this Jurassic titan still to be discovered in the future and only then might it get a new species name. Until more bones are discovered the team have simply nicknamed Britain’s oldest sauropod dinosaur, ‘Alan’, after the finder of this prehistoric beastie (Alan Gurr).

Dr Victoria Egerton (co-author on the paper) added: “The Jurassic Park that was once Yorkshire clearly has much more to offer science in our understanding of the distribution and evolution of dinosaurs.”

Dr Mike Romano, another co-author on the paper said: “Dinosaur remains of Middle Jurassic age are generally rare, even on a global scale.  So, to find a single distinctive vertebra of that age on the beach at Whitby, and one that represents a new taxon of sauropod dinosaurs, is indeed a (white) feather in the cap for Yorkshire.”

Professor Manning and Dr Egerton will be talking this week at the Times Cheltenham Science Festival.

Jane Furze, Director of the Festival, said: “At Cheltenham Science Festival we strive to showcase ground-breaking research and introduce audiences to some of the world’s greatest thinkers. The Manchester team clearly is one such pioneering group who has transformed much of what we thought we knew about dinosaurs. This latest discovery will further advance this field and we’re honoured to have the new Sauropod ‘unearthed’ at the Cheltenham Science Festival, which has become a hub for cutting-edge news.”

The University will be well represented at Cheltenham this week. In addition to Phil Manning's dinosaurs, Jodrell Bank's Tim O'Brien will be discussing the latest news on the search for alien intelligence, Brian Cox will be in conversation with Alice Roberts and Adam Rutherford about some of science's biggest issues, immunologist Dan Davis will be talking about the compatibility gene, whilst Aravind Vijayaraghavan, James Baker and Laura Winter will also be on hand to discuss Graphene and other wonder materials.

The paper ‘A new sauropod dinosaur from the Middle Jurassic of the United Kingdom’ will be published in the Journal PLOS ONE on Monday, June 1 http://dx.plos.org/10.1371/journal.pone.0128107