Sociolinguist Dr Alex Baratta works in the Manchester Institute of Education and explains how identity and the English language are still important topics for discussion. 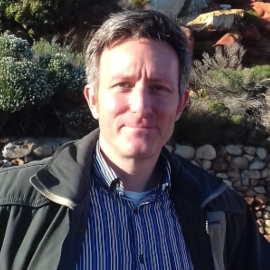 I’m originally from Los Angeles and a musician by nature, having grown up playing the violin. I studied music composition at college (university) and after graduating, I was in the US Army for four years, so I suppose you can call me a sociolinguist with a twist.

My mother is actually from Ashton-Under-Lyne, only 30 minutes from Manchester. As I spent lots of time there during my childhood, transitioning from Los Angeles to become a permanent resident here was a lot easier than I anticipated.

Manchester is a very happening and multicultural city and has everything you could need. Although it’s not huge like London, you get all that you would want in a big city, but in a more accessible space.

I specialise in researching language and identity, linguistic prejudice and linguistic rights in educational contexts. It’s an interesting area because British accents still come up for discussion in teacher training, with some accents raised as a liability in need of modification.

This causes issues for some teachers who feel pressured to modify their accent for teaching, especially amidst the focus on diversity that is part of the classroom. My recent book Accent and Teacher Identity in Britain tries to explore this further.

Also, as societies become more transient, dialects or accents can become levelled, meaning they are less regionalised. I’ve lived in Manchester for a number of years and one noticeable change that is happening here is the use of a 'tap' in people's speech. It's the sound we often hear in the American pronunciation of 'writing' (which superficially sounds like 'riding', though it is a different sound).

Exposure to American media may play a part in this pronunciation, and it is something I have heard in both younger and older generations.

My work doesn't only focus on the UK, as I am also interested in international topics such as the global spread of English (e.g. Indian English), and some educators have made my book World Englishes in English language teaching on the subject core reading for their own English as a foreign language teacher training courses.

As an American working at a UK higher education institution and being exposed to certain linguistic challenges, there is a need for more education specifically devoted to explaining the differences in language varieties and to teach people that difference doesn’t mean deficit.

All language varieties such as Ebonics in the USA and Mancunian (of Manchester) are simply operating under different grammatical rules, but rules that are systematic and predictable. There is nothing inherently better or worse with one language variety over another – such a belief is not based at all on linguistic principles.

If you want to explore how to partner with us, get in touch.