Rwanda has big ambitions to transform health care in Sub-Saharan Africa. Olivier Ndahiriwe, an Equity and Merit Scholar at Manchester, aims to make these ambitions a reality.

Three decades ago Rwanda, landlocked and with few natural resources, saw its progress thwarted by turbulent times – but the growth since has been astounding.

Now a peaceful country where people feel safe to walk around, day or night, it’s giving hope to its 12 million citizens through its aspiration of becoming a health care hub in Sub-Saharan Africa.

Nevertheless, while resources and equipment may be available, a skills shortage is holding back Rwanda’s ambition.

Olivier Ndahiriwe, from Nyabihu in northern Rwanda, is coming to the end of his master’s in Clinical Immunology at The University of Manchester. As Quality Manager at Rwanda Biomedical Center for the past six years, he has first-hand experience of the limitations of health care provision in the country.

“If we have a patient who has an immunological disorder, currently there is no one to diagnose that disease,” he explains. “It means that person may continue with the disease and eventually, without any help, can die.”

He was aware of the University’s reputation for research and teaching before he applied, but has still been surprised. “There are people here who have experience of seeing a condition face-to-face,” he says. “When they teach you they are talking about real life. They are also leading in research. It is noble to me.”

I’ve seen that there is humanism in giving to people you don’t know and whom you may never meet.

Equity and Merit Scholarships are jointly funded by the University and its donors – the University covers Olivier’s tuition fees while his living expenses have been donated by economics alumnus Christiaan van Hoorn. The programme is for academically strong professionals from Rwanda, Uganda, Ethiopia and Tanzania, and is distinctive as scholarships are granted in areas seeking to address the United Nations Sustainable Development Goals.

Olivier’s education in Manchester means a great deal – not only to him, but to the country itself, as he will become Rwanda’s first ever clinical immunologist. “My biggest contribution will be to raise awareness among health politicians and policymakers. It will have a long-term impact”, he says.

The journey to Manchester has come at no small personal sacrifice. He has left behind a wife, son and an adopted daughter for the year. “Now I only have a few months to go, they have set a countdown and I’m sure they will be happy to see me back again,” says Olivier.

Reflecting on the donor support he’s received, he concludes: “I’ve seen that there is humanism in giving to people you don’t know and whom you may never meet.

Helping people from the society that I’m from, I know that is what my donor is expecting from me. I can promise them that I will give back.

“Whether they know it or not – they have taught me to give back”. 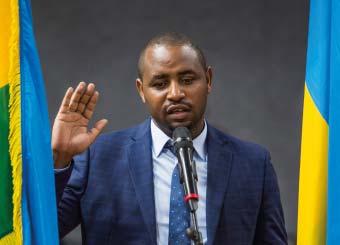