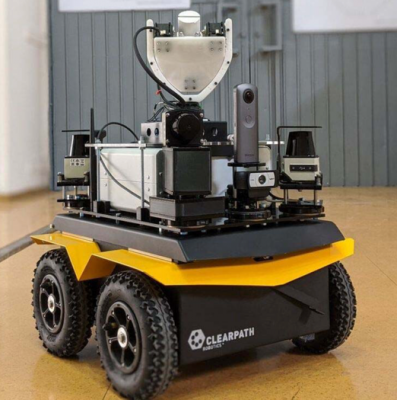 Scientists from The University of Manchester are to work alongside researchers from Lancaster University to investigate the best way to use robots to clean up radioactivity, following the awarding of a £1.49 million grant from the EPSRC.

The project, entitled 'Advancing location accuracy via collimated nuclear assay for decommissioning robotic applications' - or ALACANDRA - involves Professor Barry Lennox of the Department of Electrical and Electronic Engineering and Professor Francis Livens of the Dalton Nuclear Institute, as well as Professor Malcolm Joyce and Professor James Taylor from Lancaster University.

It will explore how robots can be deployed into radioactive facilities, such as those on the Sellafield site, to better measure, map and locate sources of radiation.

Sending robots - such as the Jackal robot carrying a collimated gamma detector (pictured) - in to map radiological areas has two problems:

ALACANDRA will investigate how measurements made using on-board detectors can be interpreted to better understand the location and activity of radiation sources within the environment.

Specifically, the project will attempt to identify the transfer properties that govern the response of collimated radiation imaging systems when they are used to characterise radioactive contamination on board mobile robotic platforms.