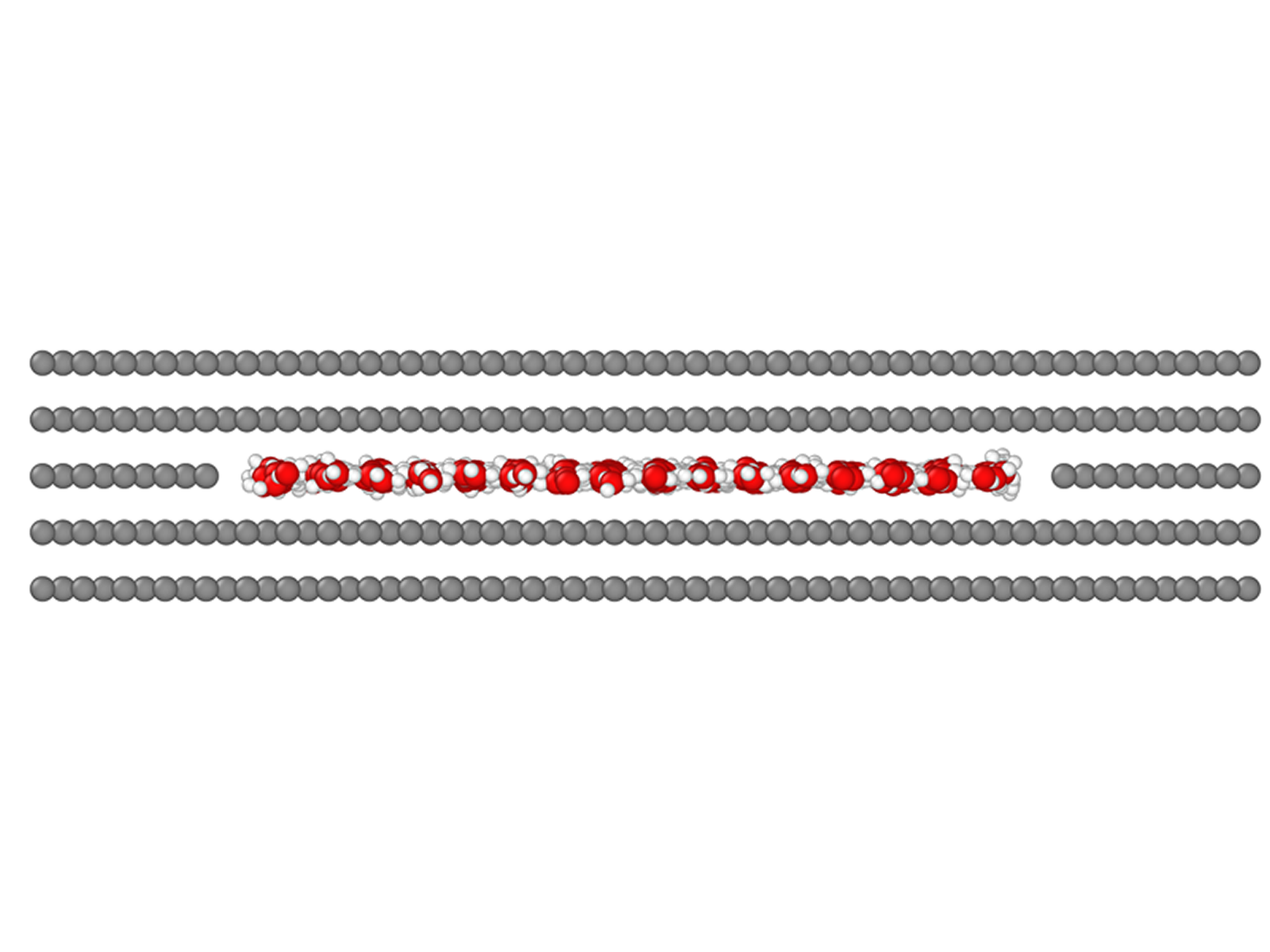 Researchers at The University of Manchester’s National Graphene Institute in the UK have succeeded in making artificial channels just one atom in size for the first time. The new capillaries, which are very much like natural protein channels such as aquaporins, are small enough to block the flow of smallest ions like Na+ and Cl- but allow water to flow through freely. As well as improving our fundamental understanding of molecular transport at the atomic scale, and especially in biological systems, the structures could be ideal in desalination and filtration technologies.

“Obviously, it is impossible to make capillaries smaller than one atom in size,” explains team leader Sir Andre Geim. “Our feat seemed nigh on impossible, even in hindsight, and it was difficult to imagine such tiny capillaries just a couple of years ago.”

Naturally occurring protein channels, such as aquaporins, allow water to quickly permeate through them but block hydrated ions larger than around 7 A in size thanks to mechanisms like steric (size) exclusion and electrostatic repulsion. Researchers have been trying to make artificial capillaries that work just like their natural counterparts, but despite much progress in creating nanoscale pores and nanotubes, all such structures to date have still been much bigger than biological channels.

Geim and colleagues have now fabricated channels that are around just 3.4 A in height. This is about half the size of the smallest hydrated ions, such as K+ and Cl-, which have a diameter of 6.6 A. These channels behave just like protein channels in that they are small enough to block these ions but are sufficiently big to allow water molecules (with a diameter of around 2.8 A) to freely flow through.

The structures could, importantly, help in the development of cost-effective, high-flux filters for water desalination and related technologies – a holy grail for researchers in the field.

Obviously, it is impossible to make capillaries smaller than one atom in size. Our feat seemed nigh on impossible, even in hindsight, and it was difficult to imagine such tiny capillaries just a couple of years ago.

Publishing their findings in Science the researchers made their structures using a van der Waals assembly technique, also known as “atomic-scale Lego”, which was invented thanks to research on graphene. “We cleave atomically flat nanocrystals just 50 and 200 nanometre in thickness from bulk graphite and then place strips of monolayer graphene onto the surface of these nanocrystals,” explains Dr Radha Boya, a co-author of the research paper. “These strips serve as spacers between the two crystals when a similar atomically-flat crystal is subsequently placed on top. The resulting trilayer assembly can be viewed as a pair of edge dislocations connected with a flat void in between. This space can accommodate only one atomic layer of water.”

Using the graphene monolayers as spacers is a first and this is what makes the new channels different from any previous structures, she says.

The Manchester scientists designed their 2D capillaries to be 130 nm wide and several microns in length. They assembled them atop a silicon nitride membrane that separated two isolated containers to ensure that the channels were the only pathway through which water and ions could flow.

Until now, researchers had only been able to measure water flowing though capillaries that had much thicker spacers (around 6.7 A high). And while some of their molecular dynamics simulations indicated that smaller 2D cavities should collapse because of van der Waals attraction between the opposite walls, other calculations pointed to the fact that water molecules inside the slits could actually act as a support and prevent even one-atom-high slits (just 3.4 A tall) from falling down. This is indeed what the Manchester team has now found in its experiments.

“We measured water permeation through our channels using a technique known as gravimetry,” says Radha. “Here, we allow water in a small sealed container to evaporate exclusively through the capillaries and we then accurately measure (to microgram precision) how much weight the container loses over a period of several hours.”

To do this, the researchers say they built a large number of channels (over a hundred) in parallel to increase the sensitivity of their measurements. They also used thicker top crystals to prevent sagging, and clipped the top opening of the capillaries (using plasma etching) to remove any potential blockages by thin edges present here.

To measure ion flow, they forced ions to move through the capillaries by applying an electric field and then measured the resulting currents. “If our capillaries were two atoms high, we found that small ions can move freely though them, just like what happens in bulk water,” says Radha. “In contrast, no ions could pass through our ultimately-small one-atom-high channels.

“The exception was protons, which are known to move through water as true subatomic particles, rather than ions dressed up in relatively large hydration shells several angstroms in diameter. Our channels thus block all hydrated ions but allow protons to pass.”

Since these capillaries behave in the same way as protein channels, they will be important for better understanding how water and ions behave on the molecular scale – as in angstrom-scale biological filters. “Our work (both present and previous) shows that atomically-confined water has very different properties from those of bulk water,” explains Geim. “For example, it becomes strongly layered, has a different structure, and exhibits radically dissimilar dielectric properties.”