Best Research Film of the Year

Best Research Film of the Year

‘The Art of Peace, Medellín' has been awarded Best Research Film of the Year by the Arts and Humanities Research Council (AHRC) for its depiction of how marginalised youth in the city of Medellín, Colombia, create alternatives to violence through arts. 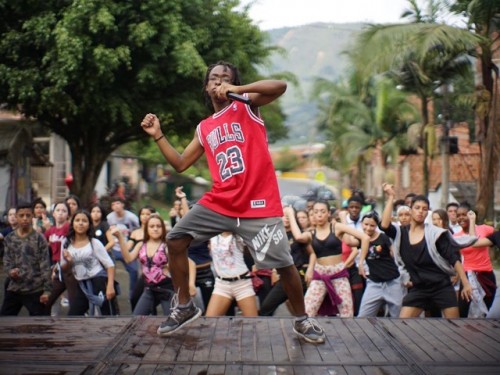 A huge congratulations to all those involved in producing The Art of Peace, Medellin. The judges at the AHRC panel said the excellent film ‘testifies to the important work being done by the research team, and yet is a standalone piece of compelling viewing’ by the telling of important stories.

Filmed in March 2019, the film is an output from the major research project The Art of Peace, an AHRC funded collaboration between The University of Manchester, Durham University, and In Place of War. The project explores the role of arts to make peace in four different situations of conflict: Bosnia and Herzegovina, the Democratic Republic of Congo, Lebanon, and Colombia. In recent years, arts-based approaches to peacebuilding have gained traction as an emerging area of research and practice, demonstrating that community-led arts projects – which give agency to local people to change their society – have an important impact upon peace formation in various stages of conflict.

University of Manchester Research Fellow Teresa Ó Brádaigh Bean (Lead Researcher on the Colombia case study and Head of Research for In Place of War) commented on the importance of this research and film:

"Having worked with creative communities in Medellin for over a decade, In Place of War wanted to make a film that gave grassroots artists an international platform to tell their stories about the role of art in their lives. These are stories that demonstrate the power of the arts in creating alternatives to violence for young people affected by conflict. This is particularly important given that young people are often regarded as either victims or perpetrators of conflict, and their agency and ability to mobilise for peace building is neglected. Equally, the film tries to challenge negative stereotypes of Medellin which focus on Pablo Escobar and drug trafficking; narratives that have dominated representations of the city and its people in popular culture.”

Having won the Best Research Film of the Year award, the film has evidently succeeded in its mission, and it is hoped that its viewers can learn a great deal about Medellin, its people, and the importance of arts in escaping the struggles of an environment.

Birte Vogel, Lecturer in Peace and Conflict Studies (HCRI) and Co-Investigator on The Art of Peace research project, added: "It was such an honour to accept the award on behalf of the entire film team. We're all absolutely thrilled.”