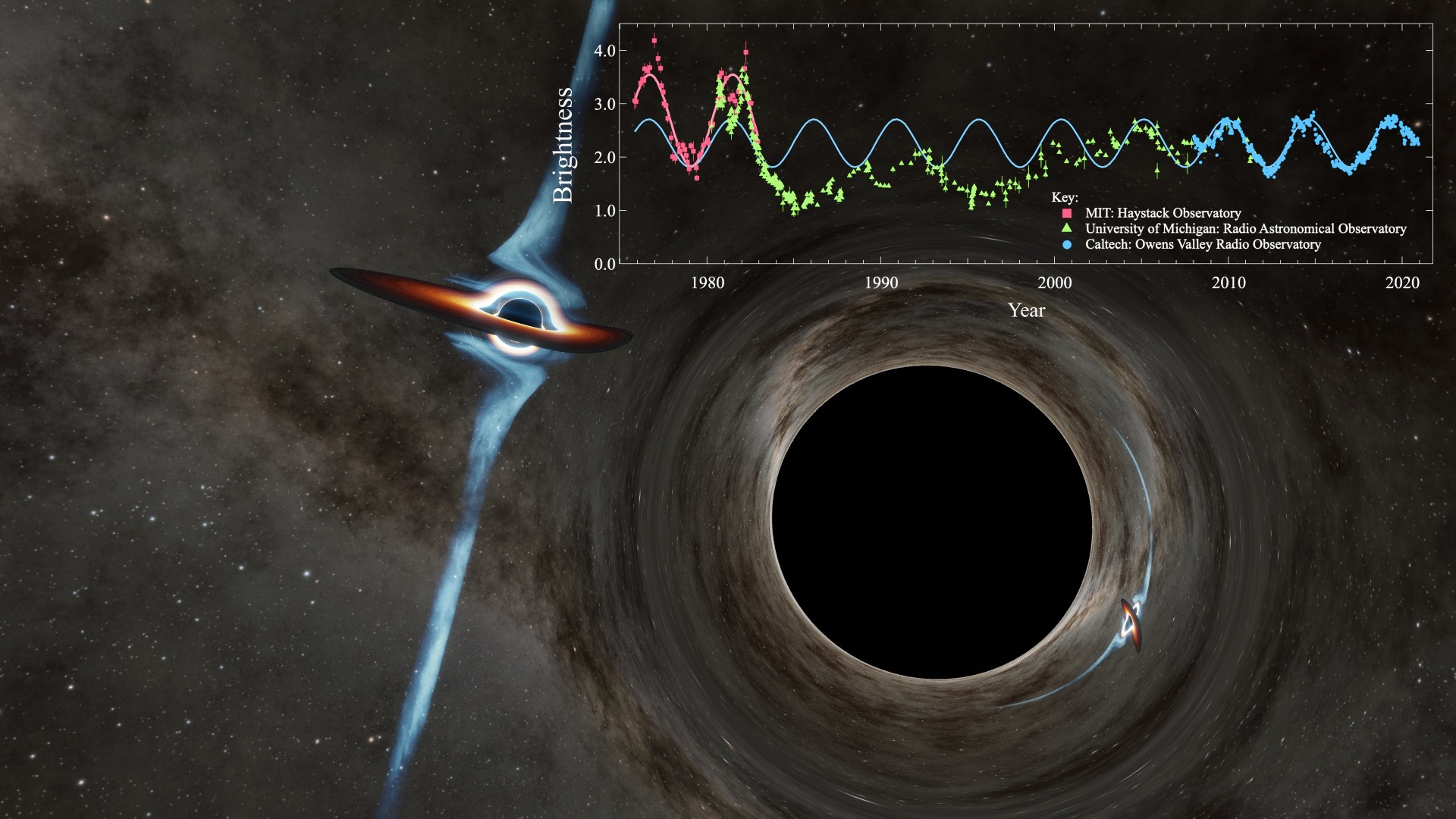 The two massive bodies are each hundreds of millions of times the mass of our sun and separated by a distance of roughly fifty times that between our sun and Pluto. When the pair merge in roughly 10,000 years, the titanic collision is expected to shake space and time itself, sending gravitational waves across the universe.

The astounding new research was published in The Journal of Astrophysical Letters today. The evidence, collected over decades, shows the cosmic event taking place within a fiercely energetic object known as a quasar. Quasars are active cores of galaxies in which a supermassive black hole is siphoning material from a disk encircling it. In some quasars, the supermassive black hole creates a jet that shoots out at near the speed of light. The quasar observed in the new study, PKS 2131-021, belongs to a subclass of quasars called blazars in which the jet is pointing towards the Earth. Astronomers already knew that quasars could possess two orbiting supermassive black holes, but finding direct evidence for this has proved difficult.

Professor Keith Grainge from The University of Manchester’s Jodrell Bank said: "This is a mind boggling story that has been 45 years in the making. Nine billion light years away there two monster black holes, each many millions of times more massive than our Sun, orbiting round each other. We can see this with radio telescopes because one of the black holes is emitting a radio jet towards us and we see it brightening and fading as they rotate one another."

The researchers argue that PKS 2131-021 is now the second known candidate for a pair of supermassive black holes caught in the act of merging. The first candidate pair, within a quasar called OJ 287, orbit each other at greater distances, circling every 9 years versus the two years it takes for the PKS 2131-021 pair to complete an orbit.

The tell-tale evidence came from radio observations of PKS 2131-021 that span 45 years. According to the study, a powerful jet emanating from one of the two black holes within PKS 2131-021 is shifting back and forth due to the pair's orbital motion. This causes periodic changes in the quasar's radio-light brightness.

This is a mind boggling story that has been 45 years in the making. Nine billion light years away there two monster black holes, each many millions of times more massive than our Sun, orbiting round each other. We can see this with radio telescopes because one of the black holes is emitting a radio jet towards us and we see it brightening and fading as they rotate one another.

Professor Grainge has been involved in this work since 2006 when he helped with re-commissioning the OVRO-40m telescope, which has provided much of the radio data in the paper. “Since then I have been involved with a programme of using the OVRO-40m to monitor the radio flux of ~1500 blazar candidates (a blazar is a particular type of active galactic nucleus, AGN) every 3 or so days. One of these sources turned out to have this interesting periodic variability which makes it a good candidate for a binary supermassive black hole system.” said Grainge.

Professor Tony Readhead from Caltech, who leads the collaboration, compares the system of the jet moving back and forth to a ticking clock, where each cycle, or period, of the sine wave corresponds to the two-year orbit of the black holes (the observed cycle is actually five years due to light being stretched by the expansion of the universe). "The clock kept ticking," he says, "The stability of the period over this 20-year gap strongly suggests that this blazar harbours not one supermassive black hole, but two supermassive black holes orbiting each other."

Ripples in Space and Time

Most, if not all, galaxies possess monstrous black holes at their cores, including our own Milky Way galaxy. When galaxies merge, their black holes "sink" to the middle of the newly formed galaxy and eventually join together to form an even more massive black hole. As the black holes spiral toward each other, they increasingly disturb the fabric of space and time, sending out gravitational waves, which were first predicted by Albert Einstein more than 100 years ago.

The National Science Foundation's LIGO (Laser Interferometer Gravitational-Wave Observatory), which is managed jointly by Caltech and MIT, detects gravitational waves from pairs of black holes up to dozens of times the mass of our sun. However, the supermassive black holes at the centres of galaxies have masses that are millions to billions of times that of our sun, and give off lower frequencies of gravitational waves than what LIGO detects.

In the future, pulsar timing arrays—which consist of an array of pulsing, dead stars precisely monitored by radio telescopes—should be able to detect the gravitational waves from supermassive black holes of this heft (the upcoming LISA mission would detect merging black holes from a thousand to ten million times the mass of the sun). So far, no gravitational waves have been registered from any of these heavier sources but PKS 2131-021 provides the most promising target yet.