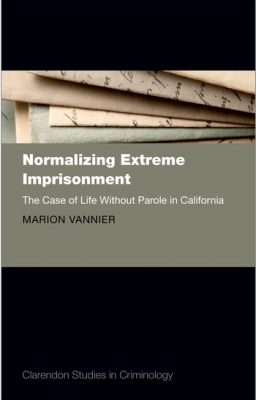 Marion Vannier’s new book, Normalizing Extreme Imprisonment: the case of life without parole in California, has just been published in the Clarendon Special Series by Oxford University press.

Using the development of life without parole (LWOP) in the Californian death penalty context, this book presents a unique case study of the ‘normalization’ of an overlooked form of punishment, where normalization refers to a punishment’s acceptability to the public, that is, what people think about severity.

The book argues that anti-death-penalty activists in California have contributed to making Life without Parole (LWOP) acceptable. The book identifies three mechanisms that have contributed to making the exceptional cruelty of LWOP seem tolerable: its routinized use, the way it is portrayed and described, and the political reactions to it. To achieve this, this book engages with two perspectives that are under-represented in academic writings: prisoners’ experiences and progressive penal policy reformers who focus on challenging the death penalty.

This ground-breaking book ultimately illuminates how extreme forms of imprisonment like LWOP can be normalized in particular when set to replace something perceived to be more severe like the death penalty. It also enriches knowledge on the significant links between LWOP and anti-death-penalty activism. The book provides a series of concepts and findings that will have empirical, theoretical and policy purchase for extreme forms of imprisonment more generally.

Normalizing Extreme Imprisonment has been nominated by OUP for the British Society of Criminology Book Prize of 2022.