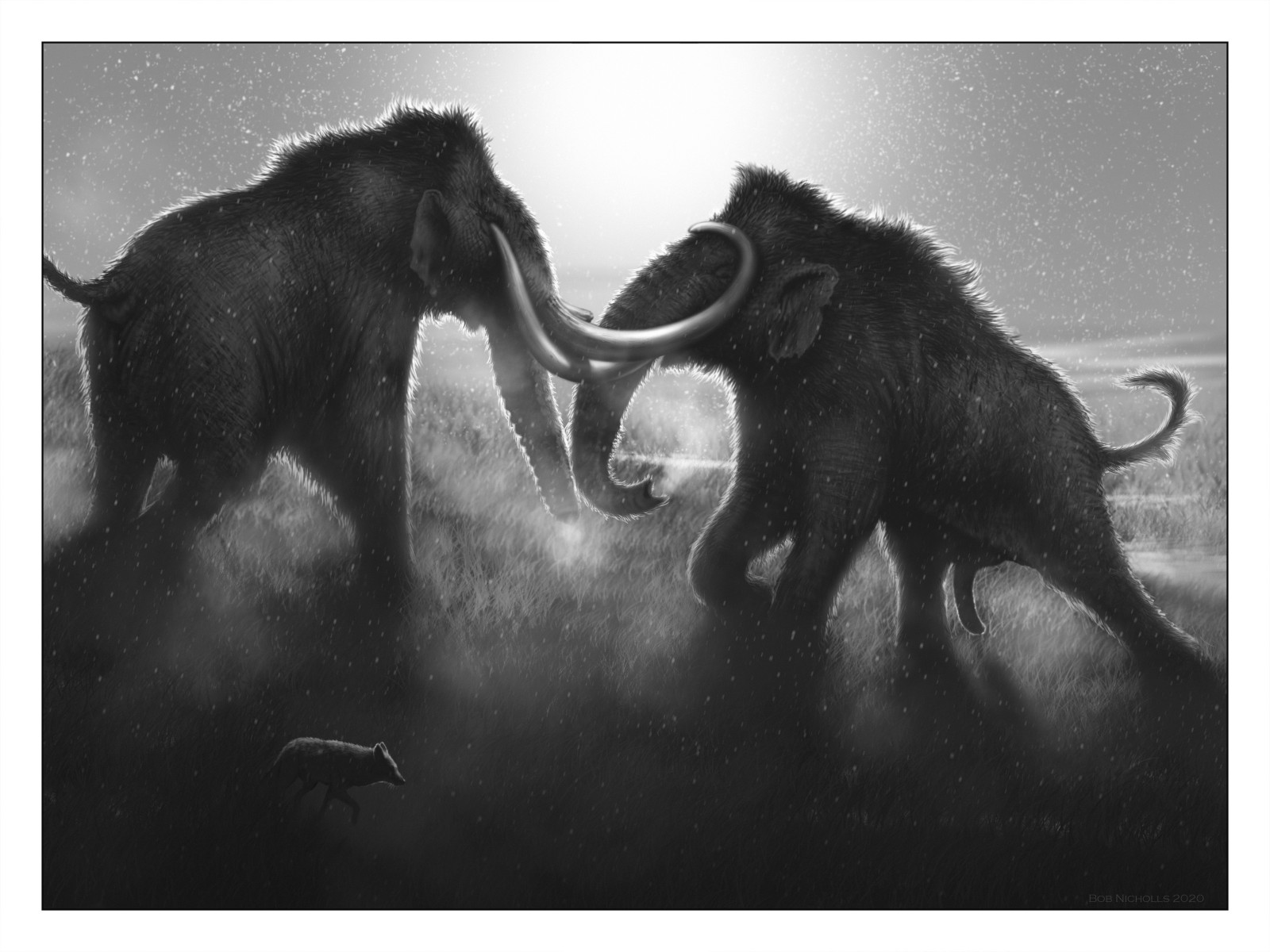 An incredible fossil discovery of two fighting mammoths has been highlighted for the first time in a new book on prehistoric behaviour.

Static dinosaur fossils captured frozen in time have driven curiosity for hundreds of years with popular media making a leap to bring them to life on the big screen. Now for the first time the remarkable prehistoric world is being told through 50 astonishing fossils each a snapshot of how these animals lived, not always harmoniously.

Dr Dean Lomax, from The University of Manchester, examines the extraordinary direct evidence of fossils captured in the midst of everyday action: dinosaurs sitting on their eggs like birds, Jurassic flies preserved while mating, a T. rex infected by parasites. Each fossil, he reveals, tells a unique story about prehistoric life.

From dinosaurs fighting to their deaths to elephant-sized burrowing ground sloths, this book takes readers on a global journey deep into the earth’s past. Locked in Time showcases fifty of the most astonishing fossils ever found, brought together in five fascinating chapters that offer an unprecedented glimpse at the real-life behaviours of prehistoric animals.

Dr Lomax said: “I’ve spent more than a decade researching and writing Locked in Time, having been inspired by an incredible Jurassic fossil I first saw in 2008. My hope is that the book, and the fossils therein, will encourage you to look at fossils and prehistoric life with an entirely new perspective, helping to show that these once living, breathing animals were as real as you and me.”

Fossils allow us to picture the forms of life that inhabited Earth eons ago. Humans’ obsession with discovering more about these long lost animals and the way they lived is ever-present. How did these animals actually behave? How they reproduce and raise their young, how they hunt their prey or elude their predators? What would it be like to see prehistoric animals as they lived and breathed?

I’ve spent more than a decade researching and writing Locked in Time, having been inspired by an incredible Jurassic fossil I first saw in 2008. My hope is that the book, and the fossils therein, will encourage you to look at fossils and prehistoric life with an entirely new perspective, helping to show that these once living, breathing animals were as real as you and me.

“The rocky remains of long-dead animals and plants immediately spring to mind when we think of fossils, and it might seem that we could never learn anything about behaviour from a seemingly lifeless ‘rock’.” Said Dr Lomax. “And yet, some exceptional fossils preserve direct evidence of behaviours, providing an incredible insight into an ancient world. Many of these fossils are largely unbeknown to the public, such as the ‘fighting mammoths’, a unique fossil of two entangled bull mammoths found in Nebraska, USA, in 1962, which is today on display at the Trailside Museum, University of Nebraska.

“Many people see prehistoric animals, especially dinosaurs, as movie monsters; creatures that roared from fight to fight. But prehistoric animals were real animals, they were every bit as varied and complicated as today’s wildlife. Locked in Time illustrates this point with 50 of the world’s most amazing fossils, each possessing direct evidence of specific behaviours. Painting so much beautiful and spectacular complexity has been one of the highlights of my career.”

Many recall behaviours typical of animals familiar to us today, evoking the chain of evolution that links all living things to their distant ancestors. Locked in Time allows us to see that fossils are not just inanimate objects: they can record the life stories of creatures as fully alive as any today. Striking and scientifically rigorous illustrations by renowned palaeoartist Bob Nicholls bring these breathtaking moments to life.

Dr Dean Lomax is an internationally recognised palaeontologist and Visiting Scientist at The University of Manchester, author, television presenter, and science communicator. His books include Dinosaurs of the British Isles (2014) and Prehistoric Pets (2020).Bob Nicholls is a world-renowned natural history artist who specializes in the reconstruction of prehistoric animals, plants, and environments. His illustrations and models have been published in more than forty books and exhibited in over forty museums, universities, and visitor attractions around the world.

Locked in Time: Animal Behavior Unearthed in 50 Extraordinary Fossils, is published by Columbia University Press, May 18, 2021.