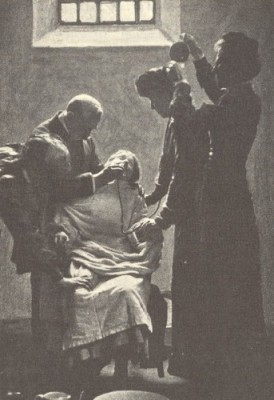 Forcefeeding of a Suffragette

Hundreds of prisoners were force fed inside English prisons during the 20th Century, according to new research which finds that the brutal practice was an ‘almost universal’ treatment of offenders on hunger strikes.

Almost 800 prisoners with no obvious political motivations staged hunger strikes between 1913 and 1940, leading to more than 7,000 instances of force-feedings, in what appears to be the first evidence of non-suffragette or political prisoners in England being subjected to regular tube feeding behind bars.

The findings are published in a new book from The University of Manchester, entitled Suffragette Legacy. It brings together a collection of academic essays, photo stories, anecdotes, art and poetry which celebrate and question the history of the early women's rights movement and its present-day legacy in Manchester, the UK and beyond.

This is the second release of new findings published in the book.

Militant suffragettes including Sylvia Pankhurst and Emily Davison routinely went on hunger strike and gained publicity from inside prisons when they were force-fed by guards.

I have uncovered evidence of convict prisoners being surreptitiously and regularly force-fed. It seems to be the first proof of non-suffragette/political prisoners undergoing force-feeding. The scale was quite large too - force-feeding seems to have been done in most prisons throughout England and Wales, even though the procedure was known to kill people

But Dr Ian Miller, who has carried out research on the topic at both The University of Manchester and Ulster University, now finds that even after the suffragettes won their plight, the dangerous practice was carried out ‘surreptitiously and regularly’ in most English prisons between 1913 and 1940 with a total of 1,188 hunger strikes staged by 834 prisoners - 40 of whom were IRA members with political motivation. Guards responded with 7,734 force-feedings which took place across 51 institutions, records show. Hardly any of the cases received public attention.

Dr Miller, author of one of the chapters of Suffragette Legacy, said: “Since the suffragette hunger strike campaign, force-feeding has re-emerged in various contexts, although many of these have been forgotten.

“I have uncovered evidence of convict prisoners being surreptitiously and regularly force-fed. It seems to be the first proof of non-suffragette/political prisoners undergoing force-feeding. The scale was quite large too - force-feeding seems to have been done in most prisons throughout England and Wales, even though the procedure was known to kill people.

“My chapter in Suffragette Legacy looks at the experiences and ethics of force-feeding which swiftly ended most protests due to its harsh, intrusive nature. However, a small minority of prisoners chose to withstand it, sometimes for a number of years.

“Unlike the suffragettes and others driven by political motivations, the most common recorded motivations for convicts protesting by refusing food were poor quality diet, excessive physical punishment, a desire to prove innocence or mental depression.”

Dr Miller researched Commissioners’ records and national archives for his chapter. Evidence of force-feedings continues into the 1970s when controversies surrounding the feeding of IRA prisoners in English prisons put a stop to it. The World Medical Association formally declared force-feeding unethical in 1975.

Camilla Rotsvik, co-editor of Suffragette Legacy and a PhD student at The University of Manchester, said: “From historians to poets, academics to activists, this edited collection of work showcases the many ways in which the early women's rights movement still has a legacy in Manchester and the world today.

“We found that academics, artists and activists all take inspiration from the suffragette movement, although they also question it. What is the role of the Pankhurst Centre in Manchester today? Why is force-feeding still happening? What do Manchester poets make of the suffragette legacy of their city? Why does Emmeline Pankhurst’s picture hang in a pub by the university? The answers to these questions and much more are found in this eclectic collection of research, art and inspiration.”