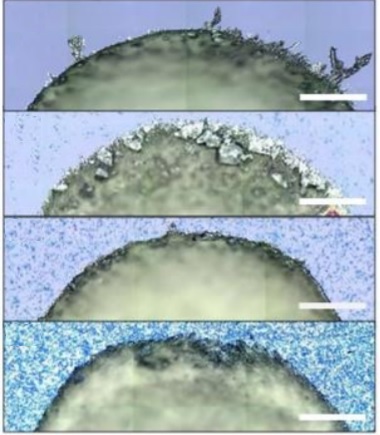 A team of researchers at The University of Manchester has demonstrated that the surface properties of graphene can be used to control the structure of organic crystals obtained from solution.

Organic crystal structures can be found in a large number of products, such as food, explosives, colour pigments and pharmaceuticals. However, organic crystals can come in different structures, called polymorphs: each of these forms has very different physical and chemical properties, despite having the same chemical composition.

To make a comparison, diamond and graphite are polymorphs because they are composed both by carbon atoms, but they have very different properties because the atoms are bonded to form different structures. The same concept can be extended to organic molecules, when interacting between each other to form crystals.

Understanding and reacting to how materials work on a molecular level is key because the wrong polymorph can cause a food to have a bad taste, or a drug to be less effective. There are several examples of drugs removed from the market because of polymorphism-related problems. As such, production of a specific polymorph is currently a fundamental problem for both research and industry and it does involve substantial scientific and economic challenges.

New research from The University of Manchester has now demonstrated that adding graphene to an evaporating solution containing organic molecules can substantially improve the selectivity towards a certain crystalline form. This opens up new applications of graphene in the field of crystal engineering, which have been completely unexplored so far.

Ultimately, we have shown that advanced materials, such as graphene and the tools of nanotechnology enable to study crystallisation of organic molecules from solution in a radically new way. We are now excited to move towards molecules that are commonly used for pharmaceuticals and food to further investigate the potential of graphene in the field of crystal engineering.

Professor Cinzia Casiraghi, who led the team, said: “Ultimately, we have shown that advanced materials, such as graphene and the tools of nanotechnology enable us to study crystallisation of organic molecules from a solution in a radically new way. We are now excited to move towards molecules that are commonly used for pharmaceuticals and food to further investigate the potential of graphene in the field of crystal engineering."

In the report, published in ACS Nano, the team has shown that by tuning the surface properties of graphene, it is possible to change the type of polymorphs produced. Glycine, the simplest amino acid, has been used as reference molecule, while different types of graphene have been used either as additive or as templates.

Matthew Boyes, and Adriana Alieva, PhD students at The University of Manchester, both contributed to this work: “This is a pioneering work on the use of graphene as an additive in crystallisation experiments. We have used different types of graphene with varying oxygen content and looked at their effects on the crystal outcome of glycine. We have observed that by carefully tuning the oxygen content of graphene, it is possible to induce preferential crystallisation.” said Adriana.

Computer modelling, performed by Professor Melle Franco at the University of Aveiro, Portugal, supports the experimental results and attributes the polymorph selectivity to the presence of hydroxyl groups allowing for hydrogen bonding interactions with the glycine molecules, thereby favouring one polymorph over the other, once additional layers of the polymorph are added during crystal growth.

This work has been financially supported by the European Commission in the framework of the European Research Council (ERC Consolidator), which supports the most innovative research ideas in Europe, by placing emphasis on the quality of the idea rather than the research area, and it is a joint collaboration between the Department of Chemistry and the Department of Chemical Engineering, with Dr Thomas Vetter.