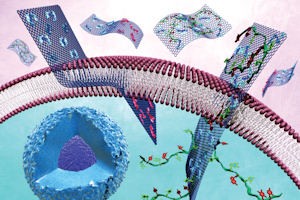 University of Manchester scientists have used graphene to target and neutralise cancer stem cells while not harming other cells.

This new development opens up the possibility of preventing or treating a broad range of cancers, using a non-toxic material.

Writing in the journal Oncotarget, the team of researchers led by Professor Michael Lisanti and Dr Aravind Vijayaraghavan has shown that graphene oxide, a modified form of graphene, acts as an anti-cancer agent that selectively targets cancer stem cells (CSCs).

In combination with existing treatments, this could eventually lead to tumour shrinkage as well as preventing the spread of cancer and its recurrence after treatment.  However, more pre-clinical studies and extensive clinical trials will be necessary to move this forward into the clinic to ensure patient benefit.

Professor Lisanti, the Director of the Manchester Centre for Cellular Metabolism within the University’s Institute of Cancer Sciences, explained: “Cancer stem cells possess the ability to give rise to many different tumour cell types. They are responsible for the spread of cancer within the body - known as metastasis- which is responsible for 90% of cancer deaths.

“They also play a crucial role in the recurrence of tumours after treatment. This is because conventional radiation and chemotherapies only kill the ‘bulk’ cancer cells, but do not generally affect the CSCs.”

Dr Vijayaraghavan added: “Graphene oxide is stable in water and has shown potential in biomedical applications. It can readily enter or attach to the surface of cells, making it a candidate for targeted drug delivery. In this work, surprisingly, it’s the graphene oxide itself that has been shown to be an effective anti-cancer drug.

“Cancer stem cells differentiate to form a small mass of cells known as a tumour-sphere. We saw that the graphene oxide flakes prevented CSCs from forming these, and instead forced them to differentiate into non-cancer stem-cells.

“Naturally, any new discovery such as this needs to undergo extensive study and trials before emerging as a therapeutic. We hope that these exciting results in laboratory cell cultures can translate into an equally effective real-life option for cancer therapy.”

The team prepared a variety of graphene oxide formulations for testing against six different cancer types - breast, pancreatic, lung, brain, ovarian and prostate.  The flakes inhibited the formation of tumour sphere formation in all six types, suggesting that graphene oxide can be effective across all, or at least a large number of different cancers, by blocking processes which take place at the surface of the cells. The researchers suggest that, used in combination with conventional cancer treatments, this may deliver a better overall clinical outcome.

Dr Federica Sotgia, one of the co-authors of the study, concluded: “These findings show that graphene oxide could possibly be applied as a lavage or rinse during surgery to clear CSCs or as a drug targeted at CSCs.

“Our results also show that graphene oxide is not toxic to healthy cells, which suggests that this treatment is likely to have fewer side-effects if used as an anti-cancer therapy.”

Graphene has the potential to revolutionise a vast number of applications, lighter, stronger composites to flexible, bendable electronics. Graphene oxide can be used to create membranes that can coat surfaces to prevent corrosion, or filter clean water in real time.  Demonstrating the remarkable properties of graphene won a University team of researchers the Nobel Prize for Physics in 2010.

Cancer and materials advanced materials are among The University of Manchester’s research beacons - examples of pioneering discoveries, interdisciplinary collaboration and cross-sector partnerships that are tackling some of the biggest questions facing the planet.

The paper is available as a free download here.