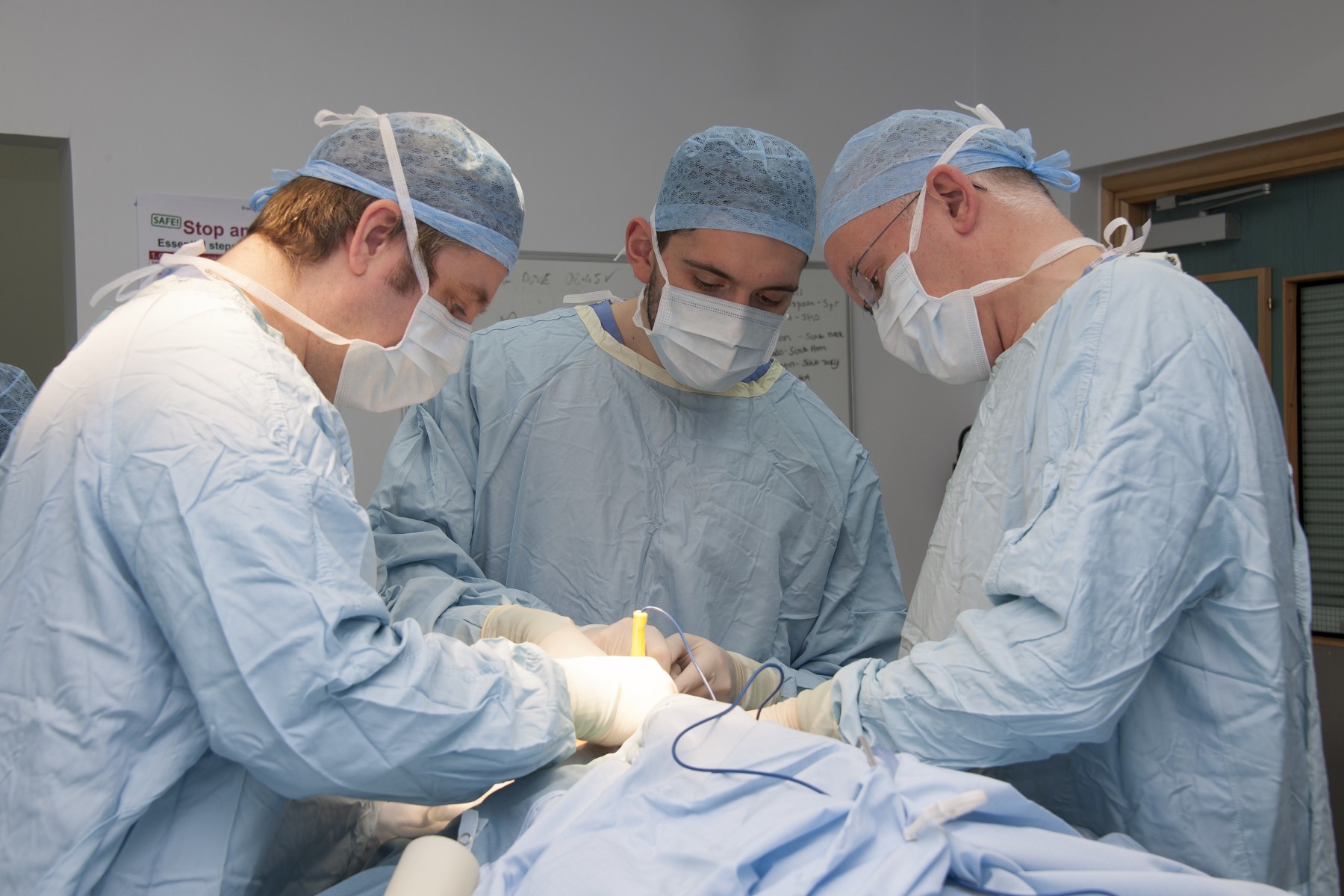 Surgeons in theatre 2
Three surgeons in gowns and masks operating on a patient underneath surgical lighting. They are using instruments.

The review, published today (21/9/22) in the British Medical Journal, shows that leaving more than 1mm of non-cancerous tissue from the edge of an excised tumour is associated with a lower risk of distant (spread elsewhere in the body) and local recurrence independent of the use of adjuvant systemic therapy.

However, a previous UK study has shown that 21% of women in the UK had surgical margins of less than 1 mm.

“If  you remove a tumour but cancer cells remain present or close to the edges, the risk of disease returning is increased,” said lead author Professor Nigel Bundred from The University of Manchester

“That is why increased surgical focus on adequacy of margin excision would improve breast cancer survival worldwide.”

When a tumour is surgically removed its edges, also known as margins, can contain microscopic cancer cells.

When the distance from the edge of the excised tissue to the tumour is measured by the pathologist, a close margin occurs when cancer cells are not at the edge, but within a given number of millimetres, usually one or two.

According to the analysis, the rate of recurrence of a tumour elsewhere in the body was 25.4% in patients with cancerous tissue still remaining at the edge.

Professor Nigel Bundred, a clinical scientist at The University of Manchester, said: “In many cancers, such as colorectal cancer, attention to ensuring meticulous removal of the cancer with an encompassing cuff of normal tissue results in improved outcomes.

If  you remove a tumour but cancer cells remain present or close to the edges, the risk of disease returning is increased,. That is why increased surgical focus on adequacy of margin excision would improve breast cancer survival worldwide

“Most patients with early breast cancer are treated with breast conserving surgery and then adjuvant(extra) systemic therapy but until this analysis, the effects of margin involvement on distant recurrence and mortality were unclear.

“But our analysis leaves us confident that inadequate margin width is associated with higher risks of distant recurrence and breast cancer mortality even after adjuvant chemotherapy, as well as increased recurrence around the original surgical site.

“That has major clinical implications for the surgical management of breast cancer and current international guidelines need revision to account for these findings.”

The data used in the study was taken from tumour tissue excised between 1980 and 2021, and observing outcomes in the patients the tissue was excised from.

Globally, local recurrence rates after breast surgery – which increases the risk of mortality - have reduced from 20% before widespread adjuvant therapy use to 5% or lower currently.

However, the impact of adjuvant systemic therapy on reducing local and distant recurrence rates has probably influenced surgeons to argue  they do not need to remove all cancerous tissue to protect a patient’s body image, argues Professor Bundred.

However, the balance between reducing the risk of recurrence and protecting body image is a difficult balancing act for many surgeons.

He added: “These findings plausibly indicate that clearance of margins in invasive breast cancer should remain a priority to reduce both distant and local recurrence irrespective of the increased use of adjuvant therapies.

“This sort of discussion with patients can be difficult, but tackling the issue of margin clearance in a supportive environment should be an essential part of informed consent for surgery.

“Similarly, decisions about re-excision should be the product of an informed decision between clinicians and patients.

“But as we believe this study shows an increased surgical focus on the adequacy of margin excision may improve breast cancer survival worldwide, such practice will be worth it.

“That is why differences between the various international surgical guidelines on the best width for margin clearance need to be standardised with prevention of distant recurrence a primary aim.”