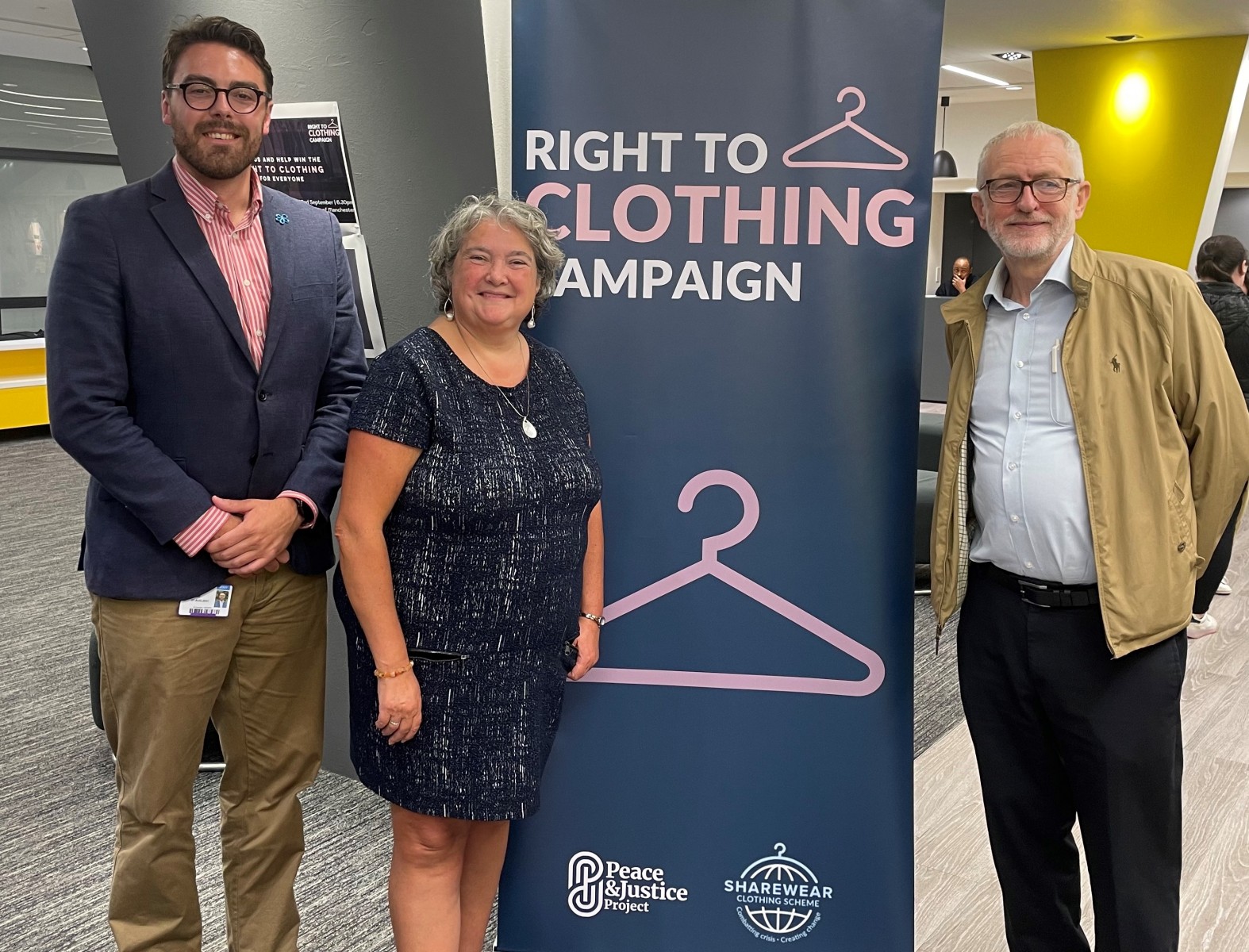 Former Labour leader Jeremy Corbyn MP has spoken at the launch of a new campaign to expose clothing poverty during the current cost of living crisis, and ensure adequate clothing for all.

The Right to Clothing Campaign is a new initiative by Sharewear UK, Jeremy Corbyn's Peace and Justice Project and Dr Luke D. Graham at The University of Manchester.

It hopes to raise awareness of clothing deprivation, provide clothing directly to people on the ground through Community Sharewear franchises, bring about a change in the law which better protects the right to clothing, and thus ensure that charity is not required for any individual to access adequate clothing.

Sharewear UK, a clothing charity based in Nottingham, has been providing clothing to those who are unable to afford them, including vulnerable families and individuals, refugees and those with no recourse to public funds and from its centre in the city since 2014.

Over the last year, they have partnered with the Peace and Justice Project to set up Community Sharewares - hubs in other cities run by volunteers where people can access clothing free of charge, starting later this year including in Manchester.

Manchester is an apt location for the launch as the city was a centre for the textile industry, and Lincoln thanked the stance that workers in the city took maintaining an anti-slavery cotton embargo during the American Civil War, which Mr. Corbyn will make reference to at the event.

A truckload of clothes is burned or dumped in the UK every second, and the campaign’s first action will be to urge activists to write to clothing brands and retailers asking what they currently do with their returns and end of line stock, before actions further in the year around lobbying MPs to support the Right to Clothing.

The campaign is also building a Right to Clothing Network comprising of foodbanks, charities, trade union branches, campaigns and organisations working in the field of clothing depravation The campaign will also look at two important strands related to the right to clothing: sustainability in fashion and garment-workers rights and is inviting groups working in this field to join their network.

After over a decade of cuts, austerity, low wages and the cost of living crisis, millions of families are struggling to put food on the table or pay their bills. On top of these difficulties, so many face the real issue of lack of access to affordable and high-quality clothing. I am delighted that the Peace and Justice Project is working with Sharewear UK in this important campaign, and look forward to raising awareness and grassroots support for this vital issue.

Louise Cooke, Founder and CEO of Sharewear UK said: “Being unable to afford basic clothing prevents millions of people across the UK from being able to simply function, yet alone flourish, in life. Meanwhile, over 300,000 tonnes of clothing goes to landfill in the UK each year and countless tonnes of clothing are incinerated by fashion retailers. This is a ridiculous situation and, after more than eight years of alleviating clothing poverty, we hope that the Right to Clothing campaign will help to put right this imbalance.”

Dr Luke Graham, an academic specialising in Human Rights law and destitution said “Whilst other deprivations, notably food deprivations, are highly publicised and visible in the UK public consciousness the same is not true of clothing deprivation.  Yet clothing deprivation is a large and still growing issue. To address this issue, it is crucial that we make it visible. Reasserting the ‘forgotten’ right to adequate clothing through the work of this campaign will be a crucial step towards achieving this.”

For more information about the campaign, visit www.righttoclothing.org.