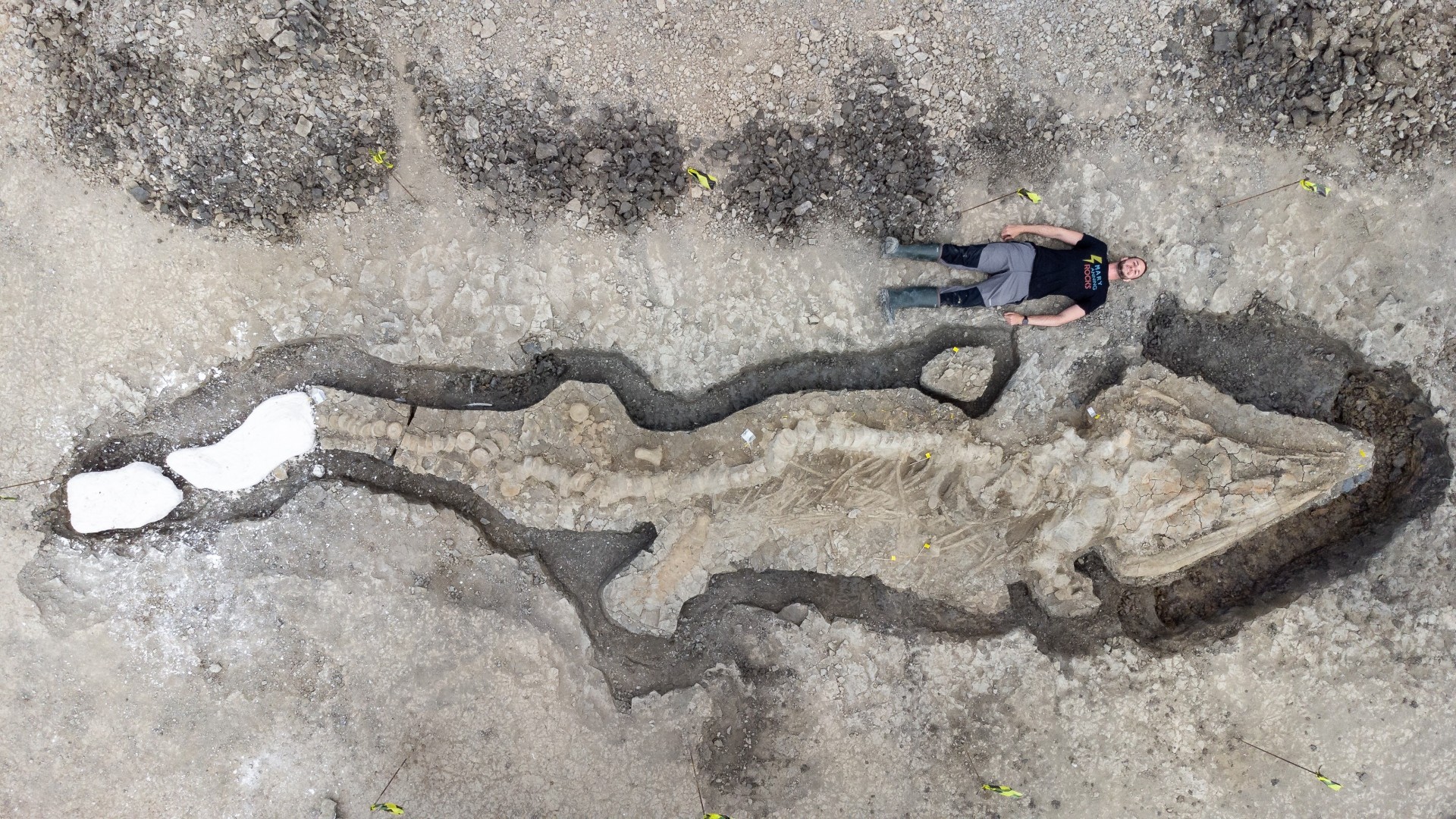 The fossilised remains of Britain’s largest ichthyosaur, colloquially known as a ‘Sea Dragon’, have been discovered at the Rutland Water Nature Reserve, owned and run by Anglian Water. It is the biggest and most complete skeleton of its kind found to date in the UK and is also thought to be the first ichthyosaur of its species found in the country.

The ichthyosaur was discovered by Joe Davis, Conservation Team Leader at Leicestershire and Rutland Wildlife Trust, who operates the nature reserve in partnership with the water company, during the routine draining and maintenance of a lagoon at Rutland Water in January 2021.

Joe Davis, who discovered the remains, said: "The find has been absolutely fascinating and a real career highlight, it’s great to learn so much from the discovery and to think that this amazing creature was once swimming in seas above us and now once again Rutland Water is a haven for wetland wildlife albeit a little smaller!"

Dr Dean Lomax, a palaeontologist and a Visiting Scientist at The University of Manchester, who has studied thousands of ichthyosaurs and named five new species, said: “It was an honour to lead the excavation and unearth this Jurassic giant from its ancient rocky tomb. Britain is the birthplace of ichthyosaurs – their fossils have been unearthed here for over 200 years, with the first finds to be recognized by science dating back to Mary Anning and her discoveries along the Jurassic Coast.

“Not only is it the largest ichthyosaur skeleton ever found in Britain, but it is also the most complete skeleton of a large prehistoric reptile ever discovered in the UK. And yes, that includes dinosaurs!”

The huge skeleton was carefully excavated in August and September 2021 by a team of expert palaeontologists assembled from around the UK, in partnership with Anglian Water, Rutland County Council and the Leicestershire and Rutland Wildlife Trust.

The excavation was led by world-leading ichthyosaur expert Dr Dean Lomax and specialist palaeontological conservator Nigel Larkin, along with marine reptile specialist Dr Mark Evans and vertebrate palaeontologist Dr Emma Nicholls from the Horniman Museum who combined their curatorial expertise to record the site. The team was supported by volunteers with experience in excavating fossil marine reptiles, including members of the local Peterborough Geological and Palaeontological Group.

Often mistaken for ‘swimming dinosaurs’, ichthyosaurs were a highly successful group of marine reptiles that became extinct about 90 million years ago. This new specimen is approximately 180 million years old and, with a skeleton measuring at least 10 metres in length and a skull weighing approximately one tonne, it is the most complete large ichthyosaur ever found in Britain.

It was an honour to lead the excavation and unearth this Jurassic giant from its ancient rocky tomb. Britain is the birthplace of ichthyosaurs – their fossils have been unearthed here for over 200 years, with the first finds to be recognized by science dating back to Mary Anning and her discoveries along the Jurassic Coast. Not only is it the largest ichthyosaur skeleton ever found in Britain, but it is also the most complete skeleton of a large prehistoric reptile ever discovered in the UK. And yes, that includes dinosaurs!

Dr Mark Evans of the British Antarctic Survey and a Visiting Fellow at the University of Leicester said: “I’ve been studying the Jurassic fossil reptiles of Rutland and Leicestershire for over twenty years. When I first saw the initial exposure of the specimen with Joe Davis I could tell that it was the largest ichthyosaur known from either county. However, it was only after our exploratory dig that we realised that it was practically complete to the tip of the tail. In the 1970’s, when Rutland Water was being constructed, two partial, but much smaller ichthyosaur skeletons were found, so finding another of these Jurassic marine reptiles was not totally unexpected, but the size of the new find was a total surprise.”

The location of the discovery in landlocked Rutland also piqued the team’s interest. In the UK, Early Jurassic rocks stretch across the country from Yorkshire to Dorset, and most ichthyosaur discoveries have been made along coastlines. Historically, major fossil finds were made at inland locations through quarrying and the creation of new roads but such finds are incredibly rare nowadays, making this new find even luckier.

Dr Evans added: “Rutland’s motto, “Multum in Parvo”, translates as “Much in Little” so it is fitting that we’ve found Britain’s largest ichthyosaur skeleton in England’s smallest county. It’s a highly significant discovery both nationally and internationally but also of huge importance to the people of Rutland and the surrounding area. If our identification of the ichthyosaur is correct, as a species called Temnodontosaurus trigonodon, this will provide new details on the geographic range of the species as it hasn’t been confirmed from the UK before.”

Nigel Larkin, specialist palaeontological conservator and Visiting Research Fellow at Reading University, said: “The block containing the massive 2m-long skull weighs just under a tonne (comprising the fossil, the Jurassic clay in which it lies, and the encasing plaster of Paris and wooden splints). The block containing the main body section weighs about a tonne and a half. It's not often you are responsible for safely lifting a very important but very fragile fossil weighing that much. It is a responsibility, but I love a challenge."

Of the few large ichthyosaurs discovered in the UK, those collected historically have poorly recorded information, with details of where they were found and their age often completely unknown. This makes the new discovery particularly important. As part of the team, Dr Ian Boomer from the University of Birmingham took samples of the Jurassic clay surrounding the ichthyosaur and discovered microscopic fossils which have helped to pinpoint the exact layer the ichthyosaur came from and determine the age as between 181.5 and 182 million years old.

CEO for Anglian Water, Peter Simpson said: “Rutland Water has a long list of previous, fascinating archaeological and palaeontological discoveries, but none more exciting than this.”

“As a water company we have a role to bring environmental and social prosperity to our region. Which is why the correct preservation and conservation of something so scientifically valuable and part of our history, is as important to us as ensuring our pipes and pumps are fit and resilient for the future. We also recognise the significance a find like this will have for the local community in Rutland.”

In order to preserve the precious remains, Anglian Water is seeking heritage funding. This will also ensure that it can remain in Rutland where its legacy can be shared with the general public.

Nigel Larkin added: "It was a very complex operation to uncover, record, and collect this important specimen safely. It involved all sorts of specialisms, materials, tools and techniques but it was completed in 14.5 days, spread over three weeks. The project to remove the plaster field jackets then clean, conserve and prepare the contents for research and display will take about 18 months - once we have secured the appropriate funding."

Not only did the team excavate the gigantic ichthyosaur, but they also unearthed an entire ecosystem of Jurassic creatures trapped in time. This includes hundreds of squid-like ammonites and belemnites, nautili, gastropods, shellfish and several ichthyosaur vertebrae from other individuals, which together provide an insight into the ancient life of this small corner of Rutland. “The site is internationally significant. We are excited to see what other secrets will be revealed in years to come as we undertake our research on the finds”, added Dr Nicholls.

Ensuring that every last detail of the ichthyosaur was recorded prior to it being removed from the ground, Steven Dey of ThinkSee3D took thousands of photographs of the fully exposed skeleton and created a high-definition 3D digital model, through a technique called photogrammetry. This vital part of the excavation will aid in the team’s future research and will also help to share the discovery with the public. The digital model will act as an important reference when the skeleton is being removed from the plaster field jackets and cleaned.

“To put this find into context for the public. In the world of British palaeontology, the discovery is like finding a complete Tyrannosaurus rex out in the Badlands of America, only this Jurassic giant was found in a nature reserve in Rutland, of all places! It is a truly unprecedented discovery and one of the greatest finds in British palaeontological history.” added Dr Lomax.

In an exclusive, the excavation of the Rutland Sea Dragon was filmed for the BBC’s primetime series, Digging for Britain. The episode will be screened on January 11 as part of the latest series.

Dr Lomax and the team of palaeontologists will continue to work on the research and conservation of this significant scientific discovery, with academic papers to be published in the future.