New President and Vice-Chancellor for The University of Manchester
Newsroom

New President and Vice-Chancellor for The University of Manchester 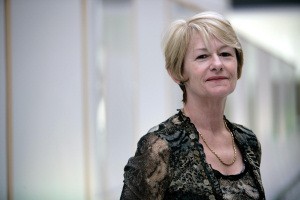 Professor Dame Nancy Rothwell has been appointed President and Vice-Chancellor of The University of Manchester.

Dame Nancy was selected following an international search which produced an impressive shortlist of candidates.

A distinguished Life Scientist, Dame Nancy has been a member of staff at the University since 1987 and Deputy President and Deputy Vice-Chancellor since 2007.

Dame Nancy becomes the first woman to lead The University of Manchester or either of its two predecessor institutions.

Commenting on her appointment, Dame Nancy said: "I am honoured and delighted to be invited to lead the University at this exciting time. I am determined to maintain the strategic focus that we have developed over the past six years and to work closely with colleagues to identify new priorities and opportunities for the University in the very challenging external environment that we will face over the next few years."

Chairman of the Appointment Panel and Chairman-elect of the University’s Board of Governors Mr Anil Ruia said: "Dame Nancy will bring her own distinctive strengths, perspective and style to the role of President and Vice-Chancellor which will enable the University to build upon the remarkable progress that we have made under Professor Alan Gilbert’s leadership."

An image of Professor Dame Nancy Rothwell is available upon request

Professor Dame Nancy Rothwell was born in Tarleton, near Preston, and educated at Penwortham Girls’ Grammar School.  She obtained a first class degree in Physiology, a PhD and a DSc from the University of London. In 1984 she was awarded a Royal Society Research Fellowship and was awarded a Chair in Physiology at Manchester in 1994, then a prestigious Medical Research Council Chair in 1998.  She has served as president of the British Neuroscience Association, a council member of MRC, BBSRC, the Academy of Medical Sciences and Cancer Research UK.

Dame Nancy began her research career in the field of obesity and metabolism, an area in which she rapidly acquired an international reputation. But more recently she has investigated how brain cells are damaged as a result of several different diseases, such as stroke and Alzheimer’s.

Dame Nancy takes a strong and active interest in public communication of science and regularly gives talks to schools and the public, and contributes to television, radio and press, particularly on sensitive issues in science.  In 1998 she delivered the Royal Institution Christmas Lecture, televised by the BBC.

The University of Manchester is the largest single-site university in the UK. It has 22 academic schools and hundreds of specialist research groups undertaking pioneering multi-disciplinary teaching and research of worldwide significance. According to the results of the 2008 Research Assessment Exercise, The University of Manchester is one of the country’s major research universities, rated third in the UK in terms of ‘research power’ behind only Oxford and Cambridge.