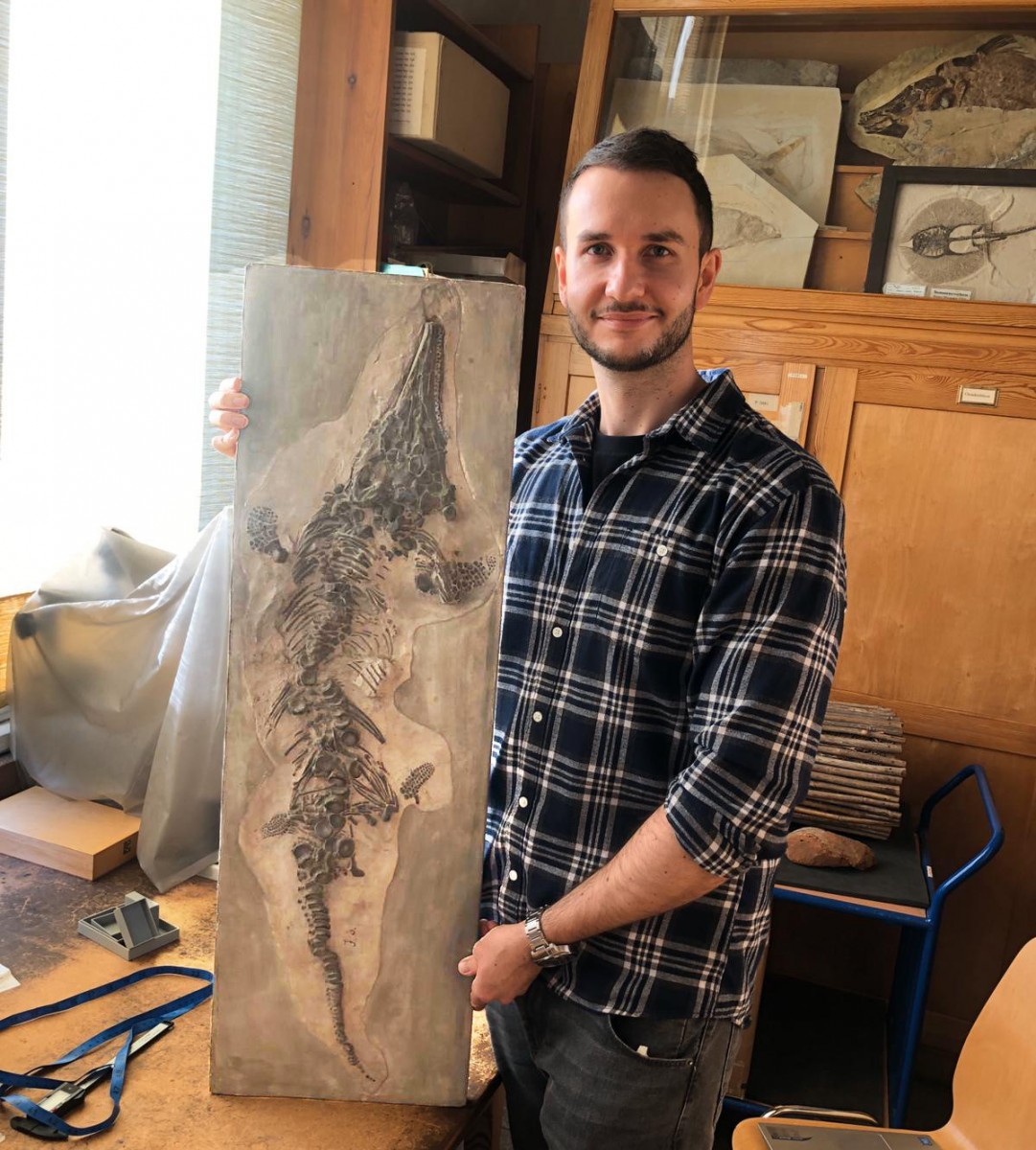 Scientists find copies of lost fossil destroyed in WWII hiding in a US museum.

The world’s first complete skeleton of a prehistoric reptile brought to the attention of science was discovered a little over 200 years ago and named ‘Proteosaurus’. Unfortunately, that fossil was destroyed in an air raid in May 1941, during WWII, with no copies thought to exist.

Now, palaeontologists have found and identified two plaster casts (copies) held in collections outside of the UK which have revealed new information about this historically significant fossil. The casts were discovered by Dr Dean Lomax, a palaeontologist and Visiting Scientist at the University of Manchester, and Professor Judy Massare, from the State University of New York, Brockport, USA.

The skeleton was found in 1818 in Lyme Regis, Dorset, UK, almost certainly by pioneering palaeontologist, Mary Anning. The Jurassic fossil was of a type of ancient marine reptile called an ichthyosaur. Often misidentified as swimming dinosaurs, these reptiles superficially looked like dolphins or sharks and appeared before the first dinosaurs evolved.

The fossil was subsequently acquired by a prolific collector, Lt-Col. Thomas James Birch, who sold it to the Royal College of Surgeons, London in 1820, to raise funds for Mary Anning and her family who were struggling to pay rent.

The discovery came at a time when people began to look scientifically at such finds. Ichthyosaur remains had been found before then, but nobody could work out exactly what they were so each new find added another piece to the prehistoric puzzle. This fossil was, at the time, the most complete ichthyosaur skeleton ever found, and was studied by a British surgeon, Sir Everard Home, who published his findings in the journal of The Royal Society in 1819. Sadly, the specimen, along with many other objects, was destroyed when a bomb hit the Royal College of Surgeons in May, 1941.

Dr Dean Lomax said: “When research on this fossil was published, it was still more than 20 years before the word ‘dinosaur’ would be invented. This and other early ichthyosaur finds sparked a major interest in collecting more of these curious, enigmatic creatures. The discoveries and research on ichthyosaurs played an important role in establishing palaeontology as a scientific discipline.”

When research on this fossil was published, it was still more than 20 years before the word ‘dinosaur’ would be invented. This and other early ichthyosaur finds sparked a major interest in collecting more of these curious, enigmatic creatures. The discoveries and research on ichthyosaurs played an important role in establishing palaeontology as a scientific discipline.

Dr Lomax and Professor Massare have worked together for more than a decade and have made several important finds whilst studying historic collections. They even named a new species of ichthyosaur after Mary Anning in 2015, Ichthyosaurus anningae.

In 2016, whilst researching in the collections of the Peabody Museum, Yale University, USA, Lomax and Massare came across a very old cast of an ichthyosaur, which they identified as the first-known cast of Home’s specimen, the first complete ichthyosaur skeleton, discovered in 1818. Up until this point, there was no record that any casts existed.

Prior to Lomax and Massare’s recognition of the Yale specimen being a cast of Home’s ‘Proteosaurus’, “Peabody curatorial staff assumed that the specimen was a real ichthyosaur fossil and not a plaster cast painted to look like the original fossil from which it was moulded”, said Daniel Brinkman, the Museum Assistant in vertebrate palaeontology at the Yale Peabody Museum. All that is known about the Yale cast Brinkman explained: “Is that it was purchased by Yale Professor Charles Schuchert as part of a large collection of fossils from the estate of Frederick A. Braun, a professional collector and dealer, and later donated by Schuchert to the Peabody in 1930.” According to Brinkman: “We, unfortunately, don’t know who made the cast or when nor do we know when or from whom Braun acquired it for his collection, though it must have been before his death in November, 1918.”

In 2019, Dr Lomax visited the Natural History Museum, Berlin, Germany, to study the collections and was astonished to find a second cast of the ichthyosaur. This one, however, was in much better condition than the cast at Yale, which is ironic considering that the original was destroyed during WWII.

“When Dr Lomax visited our collections, he kept asking me for information about this cast and I couldn’t help him very much because of missing records and labelling of the specimen”, said Dr Daniela Schwarz, the scientific head of collection of fossil reptiles at the Natural History Museum, Berlin.

Dr Schwarz continued: “So when I learned about the outcome of his detective work and that this important specimen’s cast now rested in our collections for more than a century, I was really stunned! This discovery once more demonstrates the necessity to carefully preserve also undetermined and casted material in a natural history collection for centuries, because in the end, there will always be someone who discovers its scientific value!”

Studies of both casts have shown that they were made at two different times. The Yale cast might even be a very old cast made when the ichthyosaur was still in Birch’s possession.

Professor Massare said: “In Home’s 1819 article, he illustrated the original skeleton. This drawing by William Clift was the only visual evidence we had of the ichthyosaur. Now, having two casts, we can verify the reliability of the original illustration by comparison with the casts. We have identified a couple of bones that Home missed, and found a few discrepancies between the drawing and the casts.”

“When we discovered the casts, we felt compelled to submit our research to The Royal Society, especially because they had played a major role in publishing the first accounts of ichthyosaurs in the scientific literature over 200 years ago,” Lomax explained.

“We hope that our discovery of these two casts might encourage curators and researchers to take a closer look at old casts in museum collections,” added Professor Massare.