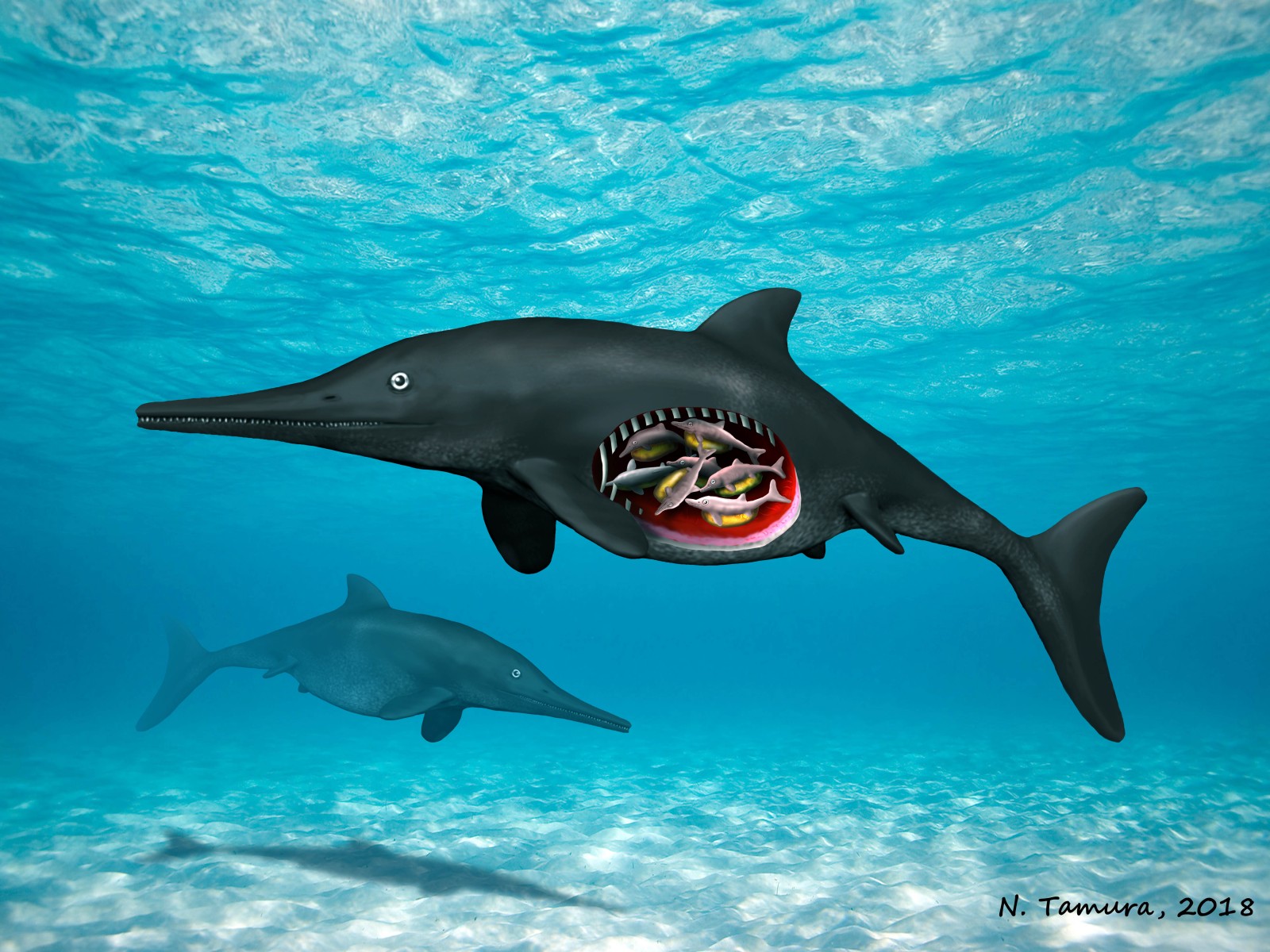 Palaeontologists have discovered part of the skeleton of a 180 million-year-old pregnant ichthyosaur with the remains of between six and eight tiny embryos between its ribs.

The new specimen was studied by palaeontologists Mike Boyd and Dean Lomax from The University of Manchester. It was collected around 2010 from near Whitby, North Yorkshire and is from the Early Jurassic. The fossil was in the collection of fossil collector, Martin Rigby, who thought the specimen might be a block of embryos. Dean confirmed the suspicion and the specimen was acquired by the Yorkshire Museum, York.

Ichthyosaurs were aquatic reptiles that dominated the Jurassic seas. They gave birth to live young, rather than laying eggs, and did not need to return to land, even to breed. They were carnivores, feeding upon other reptiles, fish, and marine invertebrates such as the squid-like belemnites.

Ichthyosaur fossils are quite common in the UK and often found in British Jurassic rocks. However, only five ichthyosaur specimens from Britain have ever been found with embryos and none with this many. All five were collected from Jurassic exposures in the south-west of England and are between 200-190 million years old. This is the first to be found in Yorkshire.

The Jurassic rocks of Yorkshire have produced hundreds of ichthyosaur and other marine reptile skeletons, but have not, until now, yielded any reptilian embryos. The new specimen, as well as being the first embryo-bearing ichthyosaur recorded from Yorkshire, is also geologically the youngest of the British embryo-bearing specimens, being from the Toarcian Stage of the Jurassic, around 180 million-year-old.

We also considered the possibility that the tiny remains could be stomach contents, although it seemed highly unlikely that an ichthyosaur would swallow six to eight aborted embryos or newborn ichthyosaurs at one time.

The specimen is a small boulder that has been cut in half and polished, which exposes several large ribs (of the adult) and several strings of vertebrae and various indeterminate tiny bones. Boyd and Lomax say there are at least six embryos present, but probably eight.

Mike said: “We also considered the possibility that the tiny remains could be stomach contents, although it seemed highly unlikely that an ichthyosaur would swallow six to eight aborted embryos or newborn ichthyosaurs at one time. And this does not seem to have been the case, because the embryos display no erosion from stomach acids. Moreover, the embryos are not associated with any stomach contents commonly seem in Early Jurassic ichthyosaurs, such as the remains of squid-like belemnites”.

“The German sites are approximately the same age as the new specimen from Whitby and it is possible that the new specimen is also Stenopterygius, but no identifiable features are preserved in the adult or embryos. Nonetheless, this is an important find.” added Dean.

Reference: Boyd, M. J. and Lomax, D. R. 2018. The youngest occurrence of ichthyosaur embryos in the UK: A new specimen from the Early Jurassic (Toarcian) of Yorkshire. Proceedings of the Yorkshire Geological Society, https://doi.org/10.1144/pygs2017-008