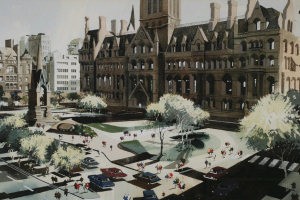 A mysterious space underneath Manchester’s Arndale shopping centre has been identified as the initial stages of a long forgotten underground railway through the city centre.

According to Dr Martin Dodge from The University of Manchester and Richard Brook from the Manchester School of Architecture, the `void' was the beginnings of a station intended to be part of a 2.3 mile-long route.

The space – forgotten for decades and closed off to the public but rediscovered by the two lecturers - is under Topshop  about 30 feet below the surface and was built to link the Arndale to the new station.

The exhibition - called Infra_MANC  - shows how Manchester was a stone's throw away from a brave new world of helipads, multiple urban motorways, tunnels and moving pavements.

The proposals for Manchester’s tube railway advanced over 20 years, culminated in the receipt of Parliamentary powers in 1972 and formal plans to commence construction works in September 1973  with a target completion date of 1978.

Three underground stations  below the Central Library, Whitworth Street and a brand new station under the junction of Market Street and Cross Sreet to serve the Arndale Centre and the surrounding commercial area would have been built.

The mainline train stations of Piccadilly and Victoria would have been connected for the first time,  while moving walkways, also in subways, would have joined Piccadilly Gardens, St. Peter's Square and Oxford Road station.

Dr Dodge said: "Manchester has long desired desire to have an underground railway crossing the city centre and perhaps the earliest was plan was put forward in 1839.

"In the 1960s and 70s, the Picc-Vic tunnel was a proposed rail route beneath the city centre and would have formed  the centrepiece of a new electrified railway network for the region.

"Our research has unearthed new engineering plans and architectural drawings that reveal how Manchester just missed out on having  its own mini tube system.

"When we came across the space beneath the Arndale - by consulting old plans and a process of elimination we became certain that it was the location of the Picc-Vic station."

According to Dodge and Brook, the Picc-Vic scheme encompassed four major routes, with trains every ten minutes outside the centre and  every two and a half minutes inside.

It would have involved two eighteen feet diameter tunnels costing £9,2713,00 at January 1973 prices.

Richard Brook said: "The infrastructure grant application was eventually turned down in August 1973 by John Peyton, Minister for Transport Industries.

“Everyone on the job received a copy of Peyton’s letter refusing to provide the finance, it was a devastating blow to some who had spent 10 years of their life on the scheme.

“Peyton cited announcements of £500 million reduction in public expenditure by Chancellor of the Exchequer Anthony Barber saying, `there is no room for a project as costly as Picc-Vic before 1975 at the earliest'.

"With hindsight we can see it was unlucky for the Picc-Vic scheme to be caught amidst this political and economic restructuring and seemingly without a powerful figurehead to champion its cause."

He added: "Vague, half rumours that the Guardian Underground Telephone Exchange (GUTE) may also have had its own impact on the Picc-Vic proposals.

“We investigated these only to discover that the project team did know the location of the GUTE, but were forced to sign the Official Secrets Act in 1971, despite the tunnels being declassified in 1968.”

Martin Dodge and Richard Brook are available for interview.

Image above:  Artist’s impression of the entrance on Albert Square to the Central Station, a new underground station on Picc-Vic railway tunnel scheme in Manchester. 1972 (David Fricker. Courtesy of Darnton EGS)