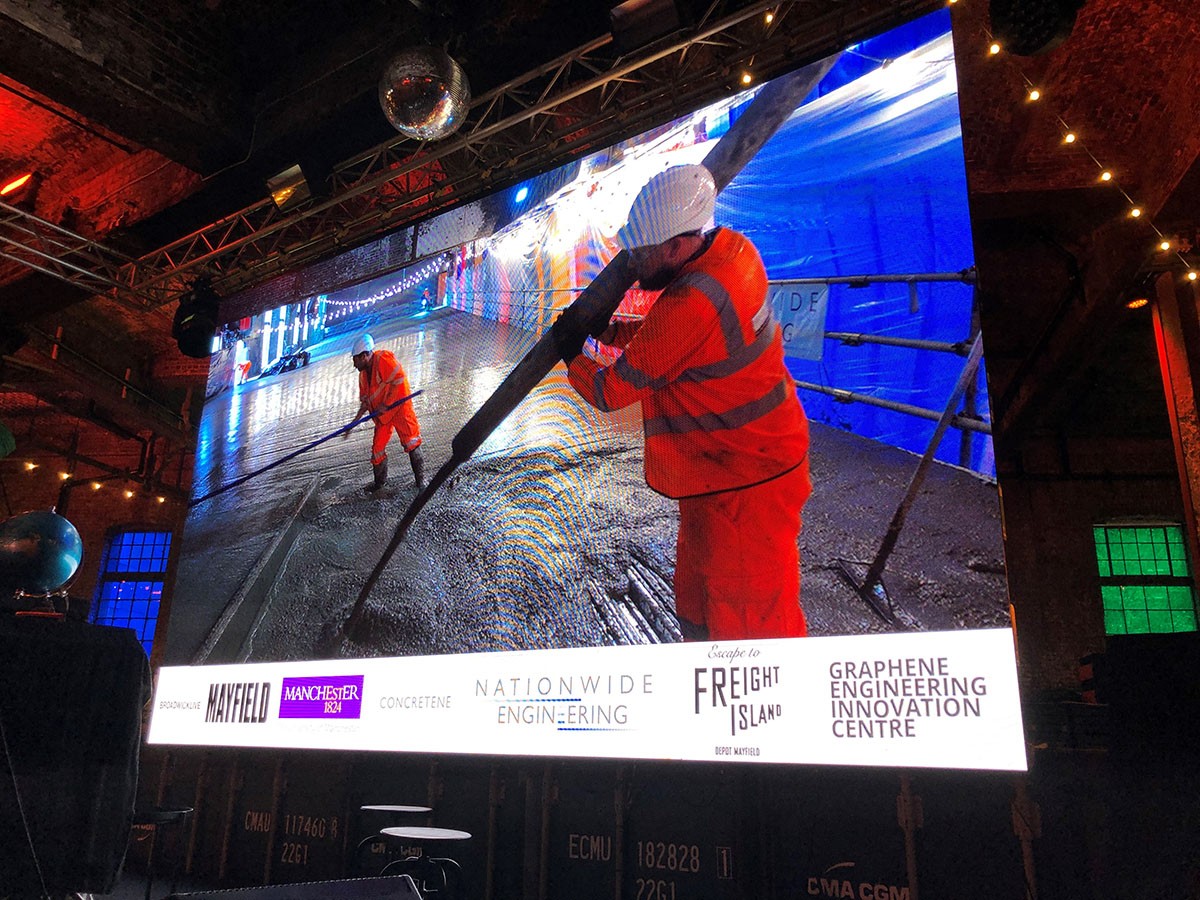 Roller disco vs climate change: how graphene is transforming the construction industry

Manchester’s Mayfield regeneration scheme made history on 12 October 2021, as the location of a pioneering piece of structural engineering, using a new, low-emissions concrete - developed by Nationwide Engineering and The University of Manchester - that has the potential to transform the global construction sector.

Concretene uses graphene – the revolutionary 2D material discovered in Manchester – to significantly improve the mechanical performance of concrete, allowing for reductions in the amount of material used and the need for steel reinforcement. This can reduce CO2 emissions by up to 30% and drive down costs, meaning Concretene is both greener and cheaper for developers.

At Mayfield, it has been used to create a new 54x14-metre mezzanine floor, which will become a roller disco at the popular Escape to Freight Island attraction in Mayfield’s vast site, a former railway depot.

The installation is the first ever commercial use of Concretene in a suspended slab and marks an important step towards testing and developing it as a widely-used building material, allowing it to be used as a substitute for concrete on an industrial scale.

The Concretene pour builds on Manchester’s reputation as a city of world-leading innovations dating back to the Industrial Revolution, and reinforces Mayfield’s return to prominence in the city amid a £1.5bn regeneration project.

“This is a huge milestone for the team, as not only is this our first commercial, third-party use of Concretene, but also the first suspended slab as used in high-rise developments.”

“As world leaders in graphene-enhanced concrete technology, the interest from the international building industry has been beyond expectations, as looming legislation is forcing significant carbon reductions throughout construction.”

“Our partnership with the University has fast-tracked the development of Concretene, going from lab to product in 18 months,” added Nationwide Engineering co-founder Rob Hibberd.

Concretene has great potential to address the construction industry’s need to lower emissions, by reducing the amount of concrete required in construction projects by as much as 30%. It also offers efficiency savings by slashing drying time. Pours of Concretene to date have achieved the equivalent of 28-day strength in just 12 hours.

James Baker, CEO of Graphene@Manchester at the University, said: “We’re delighted to play a part in this exciting project at Mayfield, showcasing how our research can translate into real-world outcomes for sustainability that can be adopted by business and make a major contribution to the city region’s ambitions for net-zero by 2038.

“This Manchester-based technology can also contribute to levelling up by positioning our region as a global R&D centre for sustainable materials for the construction industry – attracting investment, creating new businesses and offering high-wage jobs.”

Arlene van Bosch, Development Director, U+I, added: “Our ambition is for Mayfield to become an exemplar sustainable neighbourhood, where people and planet come first. Innovations such as the use of Concretene are central to realising our vision – we want to push the boundaries of design and construction to create the most environmentally-friendly place possible.

“It’s been brilliant to collaborate with Nationwide Engineering, the GEIC and our partners at Broadwick Live and Escape to Freight Island, who are doing an amazing job of making Mayfield the beating heart of Manchester’s cultural life.”

The pour of the suspended slab at Mayfield marks a significant step towards testing and developing Concretene as a widely-used building material, allowing it to be used as a substitute for concrete on an industrial scale. Graphene for the pour at Mayfield was provided by Versarien, a Tier 1 partner of the GEIC.

Leading cause of emissions

Production of cement for concrete is one of the leading causes of global CO2 emissions, producing around 8% of total global emissions.

Most commonly, graphene is a material extracted from graphite but it can be derived from many different products, including recycled plastics or biomass. This makes Concretene a game-changer in the race to lower the industry’s whole-life carbon footprint.

Roller disco vs climate change: how graphene is transforming the construction industry