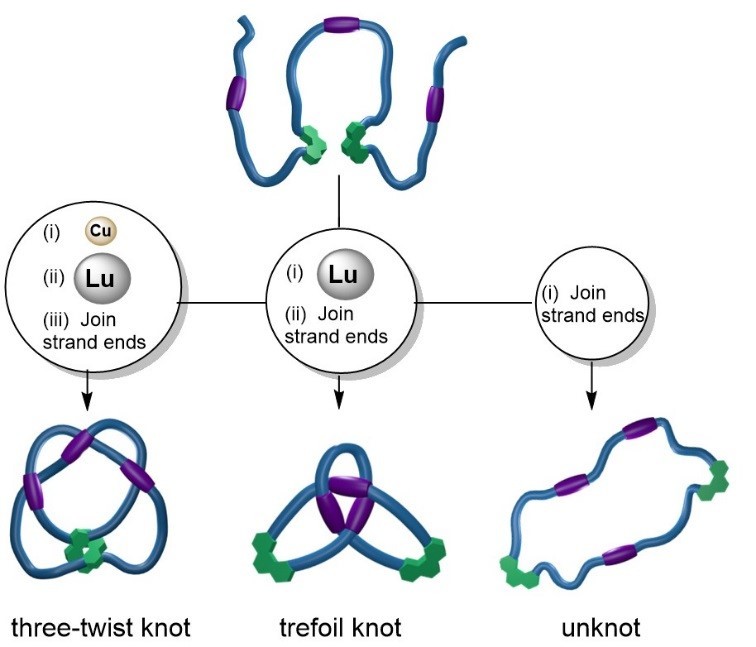 A group of chemists from Manchester have successfully tied a series of microscopic knots using individual molecules for the first time, ushering in the advent of a form of nano-scale weaving which could create a new generation of advanced materials.

The group based at The University of Manchester have developed a way to tie an artificial 15 nanometre (15 millionths of a millimetre) molecular strand into any one of three different knots just as if using a piece of string.

A piece of string can be tied into different knots, some with distinctive properties that can be exploited for different functions from shoelaces to nooses, hitches, bends and stopper knots. Some of the most advanced equipment ever developed, including the NASA Curiosity Rover used on Mars, use knots to perform key tasks. Although some DNA and protein molecules exist in knotted form, previously it has not been possible to tie a molecule into more than one complex knot.

The new research published today in journal Nature, demonstrates how the scientists were able to mimic natural molecular biological processes to achieve lab-made alternatives for a range of potential applications. Biology uses ‘molecular assistants’ called chaperones to fold proteins into knotted structures and the Manchester scientists applied the same concept to a synthetic molecular strand using metal atoms to guide the folding process.

Professor David Leigh, from The University of Manchester led the research, he said: “We were able to tie different knots in a molecular strand by using metal atoms to fold and entwine the strand. The two green sites bind to a copper atom; the three purple sites bind to a lutetium atom. Joining the end groups prevents the knot untying when the metal atoms are removed.” 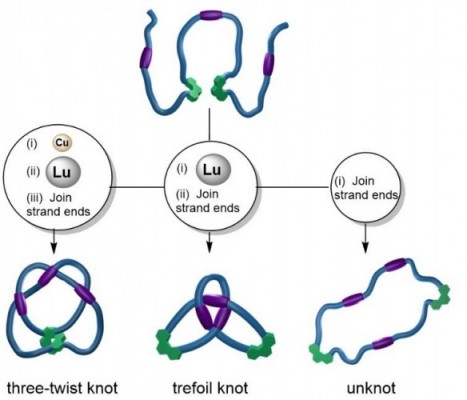 We were able to tie different knots in a molecular strand by using metal atoms to fold and entwine the strand. The two green sites bind to a copper atom; the three purple sites bind to a lutetium atom. Joining the end groups prevents the knot untying when the metal atoms are removed.

The same group had previously tied the world’s tiniest knot and now progressed their research here by using basic methods which would be familiar to anyone who joined the Scouts. Being able to make different types of molecular knots means that scientists should be able to probe how knotting affects strength and elasticity of materials which will enable them to weave polymer strands to generate new types of materials.

The key was to intersperse binding sites for different metal ions along the molecular strand. When a metal atom binds to specific sites on the strand it causes the strand to fold creating an over-under ‘tangle’ in the thread. Different tangles combine to form larger knots according to tangle theory (developed by mathematician John H. Conway, also known for developing ‘Game of Life’). Different combinations of metal ions (copper and/or Lutetium, or none, allowed any one of three different knots—an unknot, a trefoil knot, and a three-twist knot—to be tied in the same molecular strand.

Tying the molecular strand into different knots changes its properties. When the strand is tied into the tightest, most complex, knot – the three-twist knot – it can bind two metal atoms simultaneously, one copper atom and one lutetium atom. However, the looser knots (e.g. the trefoil knot and the unknot) can only bind one metal atom at a time – either one copper atom, or one lutetium atom. Unexpectedly, the metal binding can also change the way the knotted loop is entangled, like a molecular game of cat’s cradle.

The ability to tie a molecular strand into different knots, and subsequently change the region and degree of entanglement, opens up new opportunities and research directions for modifying the function and properties of other molecular chains, such as polymers and plastics.