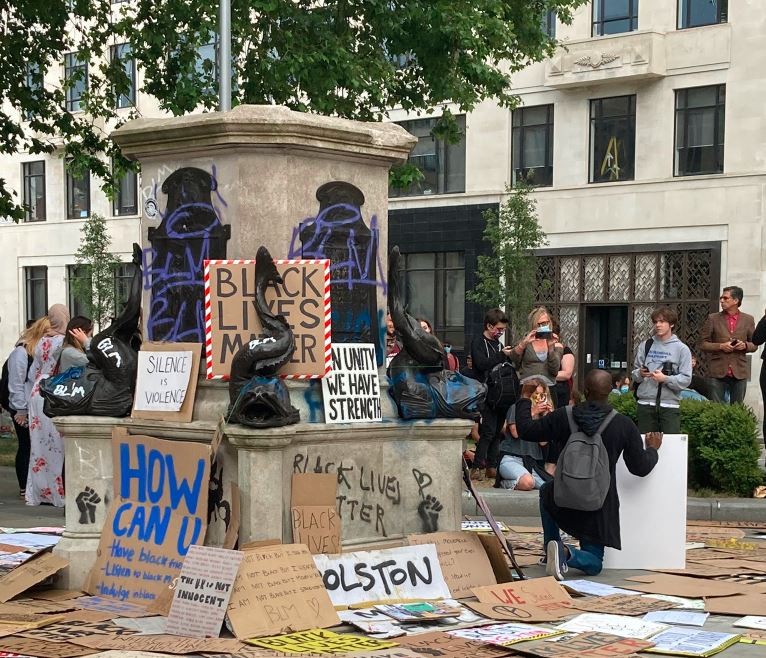 A new briefing paper on cultural activism, which challenges the government’s ‘punitive’ response to contesting statutes in the wake of the Black Lives Matter protests, has been published by the Centre on the Dynamics of Ethnicity (CoDE) in partnership with the Runnymede Trust.

The Changing Shape of Cultural Activism: Legislating Statues in the Context of the Black Lives Matter Movement is published just before the ‘Police, Crime, Sentencing and Courts Bill (2021)’ reaches the report stage.

The resurgence of Black Lives Matter protests in summer of 2020 presented an opportunity for a critical national conversation about Britishness and history. But rather than listening to activists’ concerns, the Bill takes a damaging and punitive approach to contesting statues.

Repeated references to summer 2020 make clear that the Bill is a response to the Black Lives Matter protests, particularly the toppling of the Colston statue in Bristol. The government declared that “there can be no justification for defacing statues and symbols of British history”, proposing laws that risk limiting the ability of future generations to reckon with history.

“The tremendous wave of anti-racist protests last summer made it clear that we need to think critically about how we remember slavery and empire,” said The University of Manchester’s Dr Meghan Tinsley, who co-authored the paper. “The PCSC Bill does the opposite - it punishes people who challenge the glorification of slavers and colonisers. In this policy brief, we call on councils, cultural institutions, and the central government to support creative and critical work on statues and public space.”

As part of a wider project based at CoDE at the University of Manchester, the briefing paper’s authors, alongside Professor Gary Younge, are conducting research into the global contestation of statues that commemorate slavers and colonisers.

Focusing on in-depth interviews in the UK, the US, South Africa, Belgium and Martinique, they ask why and how activists have challenged these monuments. The researchers are also investigating the diverse ways that local and national governments and institutions are responding to critical engagement with public space.

Alongside these case studies, the project includes series of online workshops convened by Dr Sadia Habib - Whose Statues? Whose Stories? - with young people from the Manchester Museum OSCH Collective, exploring creative responses to local statues in their towns and cities.

In stark contrast to claims that activists are erasing history, the interviews (and the workshops) both reveal that cultural activism encourages a deeper and more critical engagement with history in all its complexity.

The notion that the statues, often erected more than a century ago, should not be challenged, adapted or removed regardless of the values they venerate and the actions of the people they represent is obscene.  A mature and confident society should be able to re-evaluate and reinterpret its past without criminalising those who challenge and seek to alter the status quo.