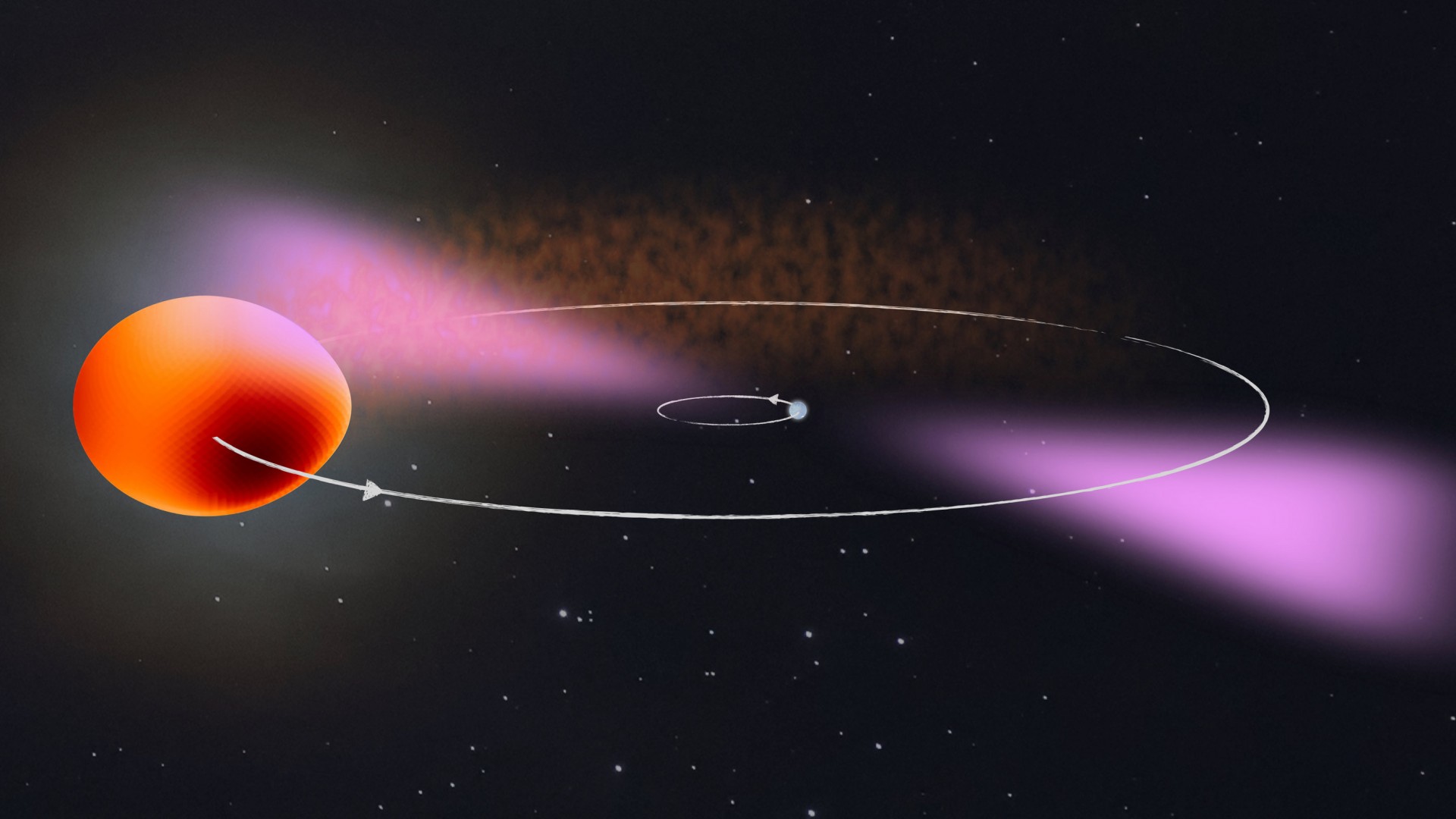 Artist's impression of PSR J2039−5617 and its companion. The binary system consists of a rapidly rotating neutron star

The international collaboration used novel data analysis methods and the enormous computing power of the citizen science project Einstein@Home to track down the neutron star’s faint gamma-ray pulsations in data from NASA’s Fermi Space Telescope. Their results show that the pulsar is in orbit with a stellar companion about a sixth of the mass of our Sun. The pulsar is slowly but surely evaporating this star. The team also found that the companion’s orbit varies slightly and unpredictably over time. Using their search method, they expect to find more such systems with Einstein@Home in the future.

Searching for the so-called ‘Spider’ pulsar systems - rapidly spinning neutron stars whose high-energy outflows are destroying their binary companion star, required 10 years of precise data. The pulsars have been given arachnid names of ‘Black widows’ or ‘Redbacks’, after species of spider where the females have been seen to kill the smaller males after mating.

The astronomer’s findings were uniquely boosted by the Einstein@Home project, a network of thousands of civilian volunteers lending their home computing power to the efforts of the Fermi Telescope’s work.

The group’s search required combing very finely through the data in order not to miss any possible signals. The computing power required is enormous. The search would have taken 500 years to complete on a single computer core. By using a part of the Einstein@Home resources it was done in 2 months.

With the computing power donated by the Einstein@Home volunteers, the team discovered gamma-ray pulsations from the rapidly rotating neutron star. This gamma-ray pulsar, now known as J2039−5617, rotates about 377 times each second.

For J2039-5617, there are two main processes at work, the pulsar heats up one side of the light-weight companion, which appears brighter and more bluish. Additionally, the companion is distorted by the pulsar’s gravitational pull causing the apparent size of the star to vary over the orbit. These observations allowed the team to get the most precise measurement possible of the binary star’s 5.5-hour orbital period, as well as other properties of the system.

“It had been suspected for years that there is a pulsar, a rapidly rotating neutron star, at the heart of the source we now know as PSR J2039−5617,” says Lars Nieder, a PhD student at the Max Planck Institute for Gravitational Physics (Albert Einstein Institute; AEI) in Hannover. “But it was only possible to lift the veil and discover the gamma-ray pulsations with the computing power donated by tens of thousands of volunteers to Einstein@Home,” he adds.

The celestial object has been known since 2014 as a source of X-rays, gamma rays, and light. All evidence obtained so far pointed at a rapidly rotating neutron star in orbit with a light-weight star being at the heart of the source. But clear proof was missing.

The first step to solving this riddle were new observations of the stellar companion with optical telescopes. They provided precise knowledge about the binary system without which a gamma-ray pulsar search (even with Einstein@Home’s huge computing power) would be unfeasible.

The system’s brightness varies during an orbital period depending on which side of the neutron star’s companion is facing the Earth. “For J2039-5617, there are two main processes at work,” explains Dr. Colin Clark from Jodrell Bank Centre for Astrophysics, lead author of the study. “The pulsar heats up one side of the light-weight companion, which appears brighter and more bluish. Additionally, the companion is distorted by the pulsar’s gravitational pull causing the apparent size of the star to vary over the orbit. These observations allowed the team to get the most precise measurement possible of the binary star’s 5.5-hour orbital period, as well as other properties of the system.”

With this information and the precise sky position from Gaia data, the team used the aggregated computing power of the distributed volunteer computing project Einstein@Home for a new search of about 10 years of archival observations of NASA’s Fermi Gamma-ray Space Telescope. Improving on earlier methods they had developed for this purpose, they enlisted the help of tens of thousands of volunteers to search Fermi data for periodic pulsations in the gamma-ray photons registered by the Large Area Telescope onboard the space telescope. The volunteers donated idle compute cycles on their computers’ CPUs and GPUs to Einstein@Home.

The new knowledge of the frequency of the gamma-ray pulsations also allowed collaborators to detect radio pulsations in archival data from the Parkes radio telescope. Their results, also published in Monthly Notices of the Royal Astronomical Society, show that the pulsar's radio emission is often eclipsed by material that has been blown off the companion star by its nearby Redback pulsar.