On 10 October 2022, Professor of Public History, David Olusoga OBE, delivered his outstanding Black History Month lecture for school children across the country, which can be watched back via YouTube (link below). 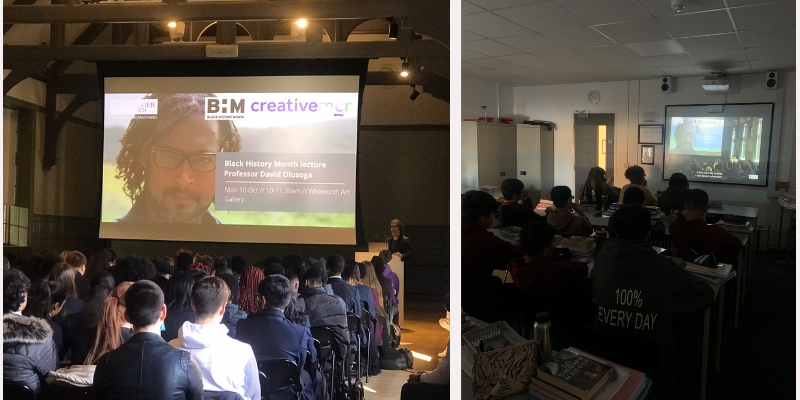 Described by attendees and viewers as a fantastic resource for students, Creative Manchester welcomed award-winning writer, historian, and broadcaster, Professor David Olusoga OBE, for his lecture on what it means to be Black and British and the role of Black History today.

With his recent book, Black and British: A Short, Essential History, being published for children to better understand the relationship between Britain and Empire, the event was particularly insightful for those in school years 7-11 and was watched live by hundreds of students in classrooms across the country.

If you would like to watch David’s insightful and educational lecture, or know anyone who this may be of interest to, you can via the The University of Manchester YouTube channel.

David Olusoga is Professor of Public History at The University of Manchester, specialising in the British Empire and how different communities experience its lasting effects in modern society. Awarded an OBE in 2019 for his services to history and community integration, David has presented several historical television programmes on the BBC. These programmes include Civilisations, Black and British, Our NHS: A Hidden History, A House Through Time, and the BAFTA award-winning Britain’s Forgotten Slave Owners.