At the Annual Conference of the Political Studies Association, Professor Maria Sobolewska and Professor Robert Ford were awarded the WJM Mackenzie Prize, and Dr Louise Thompson was awarded the Richard Rose Prize. 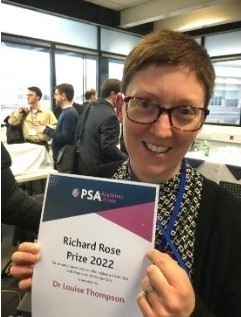 Professor Maria Sobolewska and Professor Robert Ford were awarded the WJM Mackenzie Prize for their book Brexitland: Identity, Diversity and the Reshaping of British Politics. The judges said:

‘The endorsement on the front cover describes Brexitland as the ‘new political bible of our times’. The praise is deserved but this book is more an atlas than a bible. It carefully charts the geography of Brexitland, mapping the contours of public opinion and showing the deep divides in ideology and identity between Remainers and Leavers. But it also unearths the archaeology of Brexitland, showing how those divisions were exposed by the EU referendum but laid down decades before, in particular by patterns of immigration and politicians’ responses to it and by the expansion of higher education and its liberalising effect… Brexitland is essential reading for those who want to know how the public will see and react to those debates.’

Dr Louise Thompson was awarded the Richard Rose Prize, given to an early career scholar who makes a distinctive contribution to the study of British Politics. The judges said: ‘Dr Thompson’s research has significantly advanced work on the UK parliament. She has also contributed substantially to the teaching of parliamentary studies, and towards the pedagogy of her field including through co-editing the important Exploring Parliament textbook. The judges were further impressed by Dr Thompson’s wider contributions to political studies at a relatively early career stage, including as a leader of the PSA’s vibrant Parliaments specialist group and a co-editor of the Parliamentary Affairs journal; the judges also valued her attempts to use her expertise to inform public debate and political engagement.’