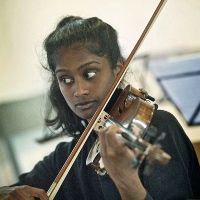 ¿During my undergraduate degree, I found my passion in fusing Indian and Western classical music.

"There are many traditional music courses and universities that may stifle this interest as it is not an accepted and conventional compositional practice. However, my tutor at The University of Manchester encouraged me to do so and continues to inspire and support me during my master¿s."

Our MusM Composition (Instrumental and Vocal) master's course offers intensive training for composers and provides excellent preparation for doctoral work or a career in the professional world.

With a strong focus on practical music-making and supported by an outstanding programme of workshops and performances by professional musicians, it offers an invaluable opportunity for composers to hone their skills and develop their personal voice.

You will benefit from:

You can also choose to take a placement unit where you will spend a minimum of 20 days over a period of up to 12 weeks with an arts and cultural organisation, business or service provider to gain valuable workplace experience.

Our close links with in-house and Manchester-based ensembles allow us to guarantee that every student taking this course will have their music performed and/or workshopped by professional ensembles, including the Quatuor Danel, Psappha, Trio Atem, Distractfold, the Vonnegut Collective and the Manchester Camerata.

The Quatuor Danel enjoys a huge international reputation and their repertoire seemingly knows no limits.

From early Haydn through Beethoven and Schubert, to neglected masterpieces from the Soviet Union, to white-knuckle rides through Ligeti, Xenakis and Lachenmann and premieres of new works by Manchester composers, our intrepid String Quartet-in-Residence regularly scales the summits of chamber music. Their visits to Manchester form a backbone of the University's concert series.

Psappha is one of this country's leading contemporary music ensembles, specialising in the performance of music by living composers and that of the 20th and 21st centuries.

The ensemble has an extensive repertoire and a reputation for technical assurance and interpretive flair, and an ever-expanding library of online performances on their YouTube channel.

Psappha has commissioned and premiered works by a wide range of composers, achieving particular notoriety for their performances of music by Peter Maxwell Davies.

In addition, MusM students frequently have their work performed by The University of Manchester's new music ensemble.

Manchester is home to more professional music-making than any UK city outside of London.

There are three professional orchestras, as well as internationally recognised institutions such as the BBC, Bridgewater Hall, Opera North and The Royal Northern College of Music (RNCM).

Most taught course units are delivered via weekly seminars and/or tutorials.

The composition portfolio is supported by one-to-one supervision and is submitted at the beginning of September.

Each student meets regularly with their supervisor (for full-time students usually on a weekly basis during term-time, less frequently during vacations), allowing for in-depth exploration of ideas and intensive support for the various course units offered.

Other members of the academic staff are also available for individual consultation during designated office hours.

Alongside your taught units, you will have access to a range of non-assessed seminars, workshops and training sessions offered by the Graduate School.

All postgraduate students are expected to undertake their own programme of self-directed learning and skills acquisition.

This may also involve wider reading, language work, computer training and attendance at research seminars in other parts of the University.

There are no formal examinations. Taught course units - all of which must be satisfactorily completed - are assessed by submission of compositions, coursework essays or other tasks, normally submitted at the end of each semester (January and May).

The Composition Portfolio is created over the entire duration of study and is submitted at the end of the academic year (after the summer vacation). All work is double-marked internally and moderated by the External Examiner.

This course is designed to give a comprehensive training to composers in much more depth than is possible at undergraduate level.

This means that the core course units are designed specifically for instrumental composers. It is also possible to take one 30-credit course unit in electroacoustic composition, performance or musicology.

Compulsory units are Portfolio of Compositions (60 credits), which normally consists of at least three works for contrasting media or instrumentation, and Composition Project , which focuses on a complete composition, written over a limited period of time in response to specific criteria and supported by discussion in tutorials.

Further options include Aesthetics and Analysis of Organised Sound , Interactive Tools and Engines and Historical or Contemporary Performance .

'My master's year at Manchester was absolutely crucial to my development as a composer - I received inspiring and meticulous tuition on my pieces, was part of a rewarding community of composers, and benefitted from the University's admirable emphasis on giving performance opportunities for composers.

'During the year, I wrote three short Etudes to be workshopped by musicians from Trio Atem, a string quartet workshopped by the Quatuor Danel, a piece for the Manchester Camerata student composers competition, a piece inspired by and performed at the Anthony Burgess Institute, and was also asked to write two large-scale pieces - a concerto for two pianos and ensemble and a piece for two ensembles - not to mention having existing pieces performed by the University's excellent new music ensemble.'

'The MusM in Composition at Manchester provided me with different opportunities to write for different players and ensembles including the pianist Richard Casey and the Quatuor Danel.

' I was also able to orchestrate a solo piano piece and hear it in a workshop with the University of Manchester Symphony Orchestra.

'I believe that the great advantage of studying at the university was the variety of styles within the composition staff and student body as well as the fact that everything that I composed was workshopped or performed.

'A unique quality of the University is its proximity to the city of Manchester, rich in culture, arts and entertainment, as well as educational and employment advantages.

'It is a very concentrated but diverse and cosmopolitan city.'

You will have access to a wide range of study facilities and cultural assets at Manchester.

Alongside teaching rooms and practice rooms, the building houses the Cosmo Rodewald Concert Hall (capacity 350, with a stage large enough to accommodate a full symphony orchestra), the John Thaw Studio Theatre, the Lenagan Library and a postgraduate suite consisting of a common room and computer room.

The Lenagan Library is a small reference library housed in the Martin Harris Centre that includes major scores, reference tools and a large collection of recordings, together with listening rooms and a spacious work area.

The Henry Watson Library is located in Manchester's Central Library and is renowned for its Handel and Vivaldi manuscripts, and the library of the nearby Royal Northern College of Music.

Find out more about our facilities .