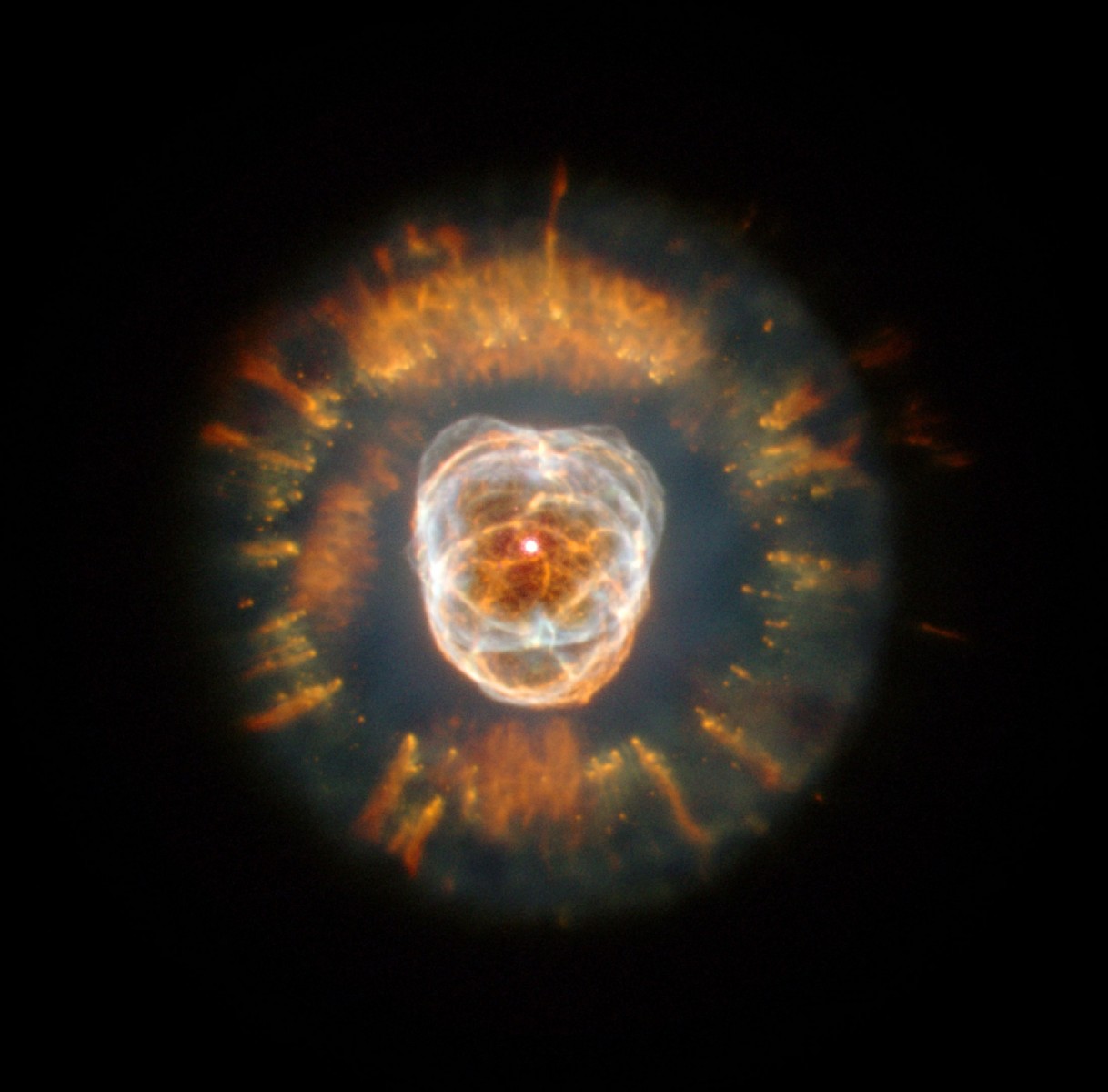 Astronomers have captured the first ever detailed images of unusual stellar winds which surround dying stars as they reach the end of their existence. The extraordinary images show mesmerising shapes which solve a century-long mystery about the death of stars like the Sun.

The Sun at the end of its life will eject much of its mass into space, creating a stellar wind of catastrophic proportions. The wind will form a planetary nebula – an expanding glowing shell of gas surrounding the star. Planetary nebulae show an extraordinary variety of colourful shapes which have been studied by scientists for more than a century. The origin of these shapes have remained a mystery until now.

The intricate shapes are now captured on camera for the first time, giving an explanation to their origin. Contrary to common consensus, the international team of astronomers found that these stellar winds are not spherical like the stars they surround.

The new images showed the team that a star’s interaction with an accompanying star or exoplanet shapes the stellar winds and that this causes the shapes of the planetary nebulae. The team realised that other, low-mass stars or even heavy planets in the vicinity of the dying star were causing the different patterns.

The study also helps to envision what the Sun might look like when it dies in 7000 million years. Jupiter or even Saturn – because they have such a big mass – are going to influence whether the Sun spends its last millennia at the heart of a spiral, a butterfly, or any of the other entrancing shapes seen in planetary nebulae today. The team calculates now that a weak spiral will form in the stellar wind of the old dying Sun.

The new findings published today in Science, show the nebulae all seem to have a certain symmetry, but are almost never round. The images were obtained at the ALMA Regional Centre in Manchester, and five University of Manchester astronomers were closely involved in the project.

Professor Albert Zijlstra, The University of Manchester, said: “These recent images are about the stars like the Sun that reach the end of their lives. Nine out of ten stars will form a planetary nebula at that time. The origin of the shapes of the planetary nebulae has never been clear. It seemed as if the shapes only formed after the winds had ceased.

“Our new observations finally resolve the mystery. The winds become a-spherical because the dying star interacts with a companion star or nearby planet. The shapes we now see have remarkable similarity to those seen in the subsequent planetary nebula. We can now even predict the shape of the planetary nebula of the future Sun.” 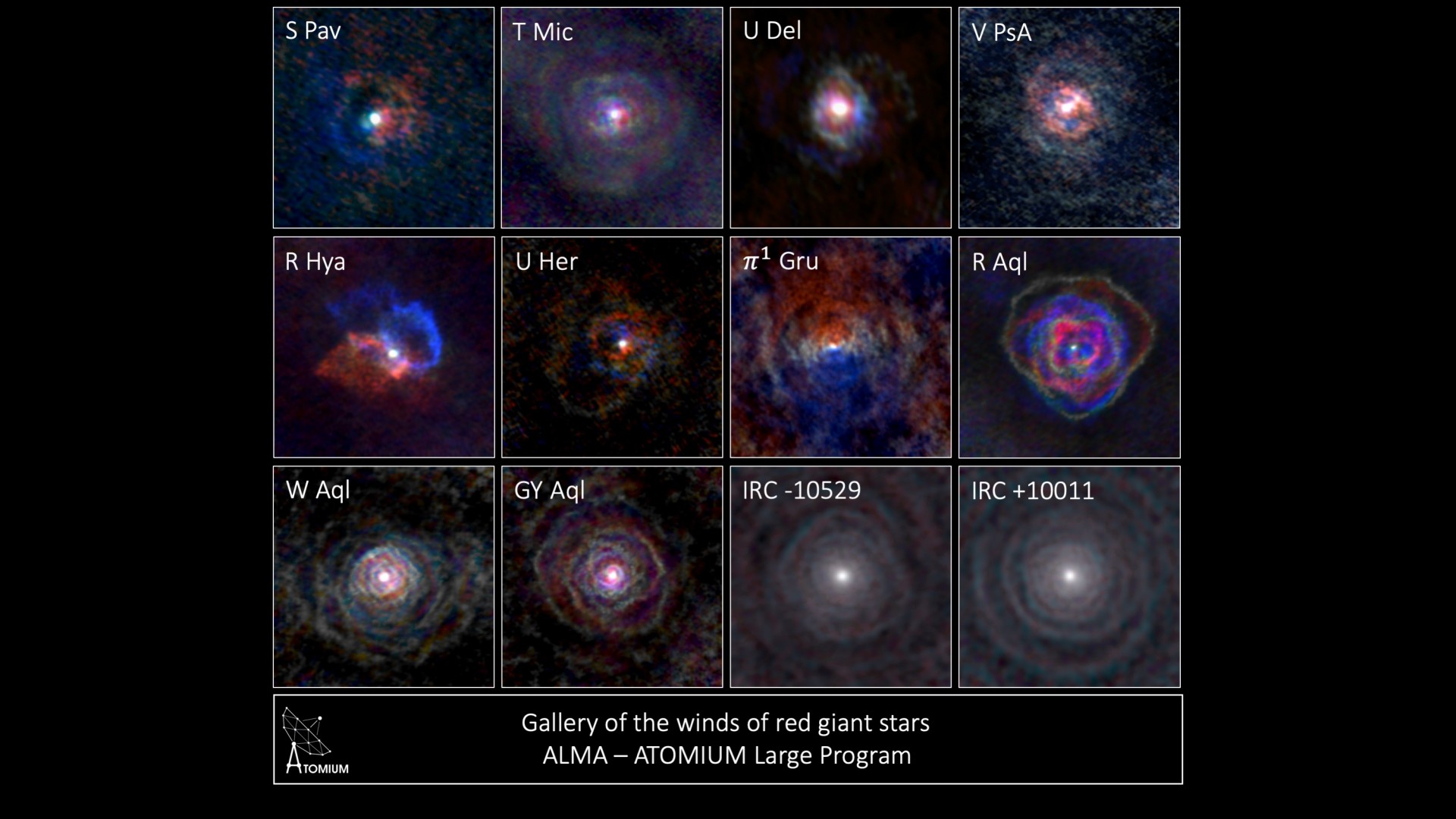 These recent images are about the stars like the Sun that reach the end of their lives. Nine out of ten stars will form a planetary nebula at that time. The origin of the shapes of the planetary nebulae has never been clear. It seemed as if the shapes only formed after the winds had ceased. Our new observations finally resolve the mystery.

Dying stars swell and cool to eventually become red giants. They produce stellar winds, flows of particles that the star expels, which causes them to lose mass. The Sun will lose as much as half its total mass at that time, 5 billion years from now. Because detailed observations were lacking, astronomers have always assumed that these winds were spherical, like the stars they surround. As the star evolves further, it heats up again and the stellar radiation causes the expanding ejected layers of stellar material to glow, forming a planetary nebula.

“The Sun – which will ultimately become a red giant – is as round as a billiard ball, so we wondered: how can such a star produce all these different shapes?” says corresponding author Leen Decin (KU Leuven).

The team observed stellar winds around cool red giant stars with the ALMA Observatory in Chile, the largest radio telescope in the world. For the first time ever, they gathered a large, detailed collection of observations.

The astronomers could even identify different categories of shapes. Some stellar winds were disc-shaped, others contained spirals, and in a third group, we identified cones. Which showed a clear indication that the shapes weren’t created randomly.

Up until now, calculations about the evolution of stars were based on the assumption that ageing Sun-like stars have stellar winds that are spherical. Since the complexity of stellar winds was not accounted for in the past, any previous mass-loss rate estimate of old stars could be wrong by up to a factor of 10. The team is now doing further research to see how this might impact calculations of other crucial characteristics of stellar and galactic evolution.