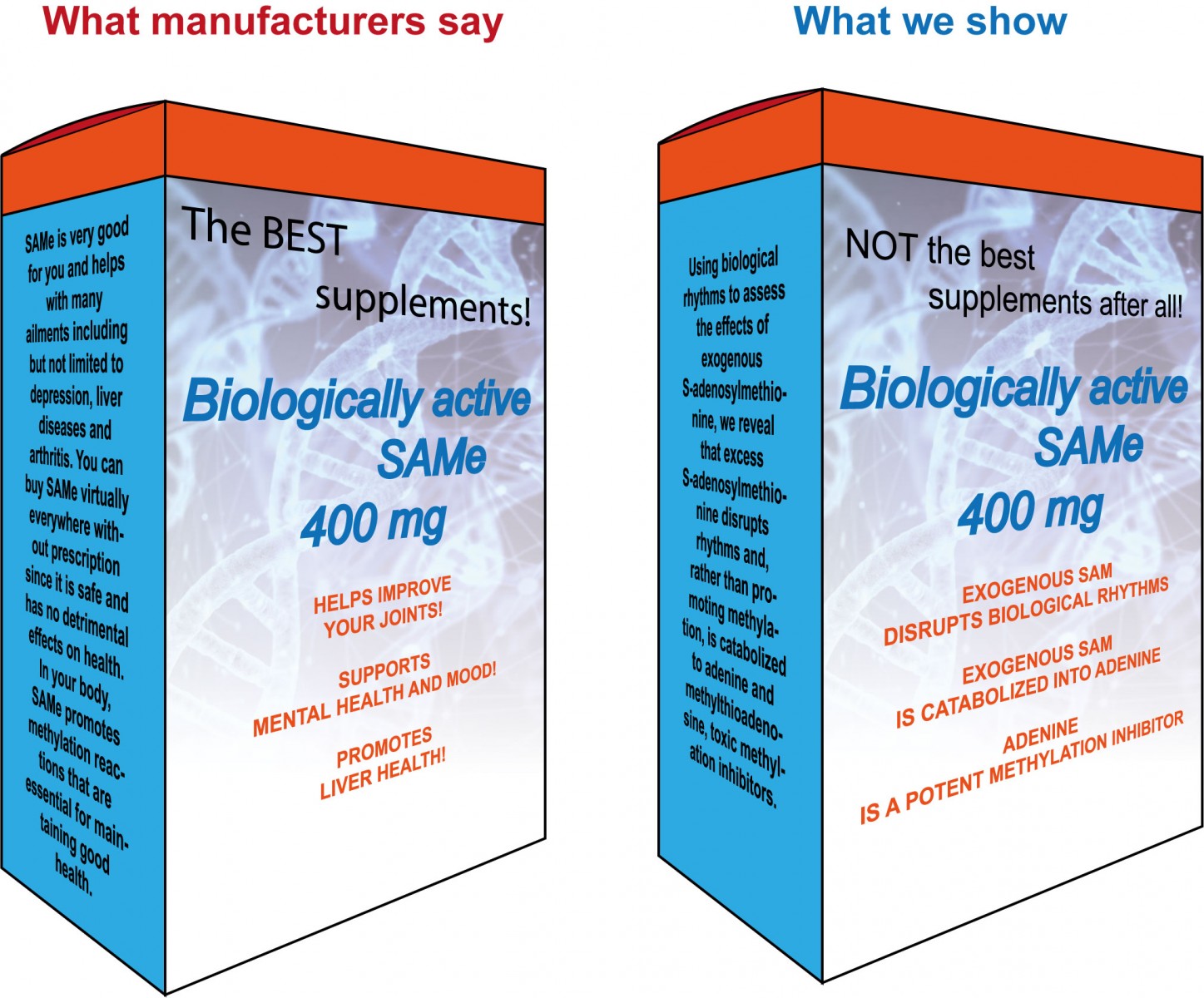 Common supplement could be too toxic, scientists warn

A dietary  supplement sold over the counter could be toxic and should not be used until it is shown to be safe, biologists from the Universities of Manchester and Kyoto have discovered.

Sellers of the supplement- known as  SAMe, which is short for -S-adenosylmethionine - claim it can help a range of conditions including joints and liver diseases, and promote emotional wellbeing.

However Manchester’s Dr Jean Michel Fustin says it disrupts the biological clock in the body because it is broken down into adenine and methylthioadenosine – known toxic substances that cause a wide range of other problems including kidney and liver damage.

The study of mice, published in Communications Biology, was funded by the Medical Research Council and the Japanese Society for the Promotion of Science.

Dr Fustin and co-workers unexpectedly discovered the impact of this supplement when he was studying how the biological clock in mice is influenced by different compounds.

With SAMe, they were attempting to promote SAMe-related metabolism of the animals, though they were surprised to find an opposite inhibitive effect.

SAMe-related metabolism is very ancient, and critical for the biological clock in human and plant cells, worms, fruits flies and even bacteria.

The health benefits that manufacturers claim are questionable to say the very least. And because it’s unclear what dose is safe, there is a good chance that a safe dose will be exceeded – if one exists at all

“This worrying effect of SAMe on the body clock in mice strongly suggested it will be toxic in human as well, which we actually confirmed in human cells” said Dr Fustin.

“The health benefits that manufacturers claim are questionable to say the very least. And because it’s unclear what dose is safe, there is a good chance that a safe dose will be exceeded – if one exists at all.

“We should trust the amount of SAM our own body produces, unless there are clear clinical signs of deficiencies.”

Adenine and methylthioadenosine inhibit chemical reactions called methylations that occurs in every cell and tissue in the body. SAMe is required for these reactions, and it was expected that more SAMe would promote methylations. But the opposite turned out to be true.

Disruptions to  methylation processes have been linked to a variety of problems, including: heart attack, stroke, dementia, depression, migraines, autism, fertility, cancer, and  birth defects.

He added: “Because of the accumulation of adenine and methyltioadenosine, the consequences of chronic excess SAMe in the body are potentially very serious.

“I would advise the public to steer clear of SAMe, at the very least  until we understand more about its effect on human health.”

Every human is controlled by an internal “body clock” which orchestrate our circadian rhythms – the natural internal processes regulating our physiology every 24-hours.

This internal clock controls most of our body processes over this period, including our sleep/wake cycles, digestion, metabolism, appetite and immunity.

Common supplement could be too toxic, scientists warn