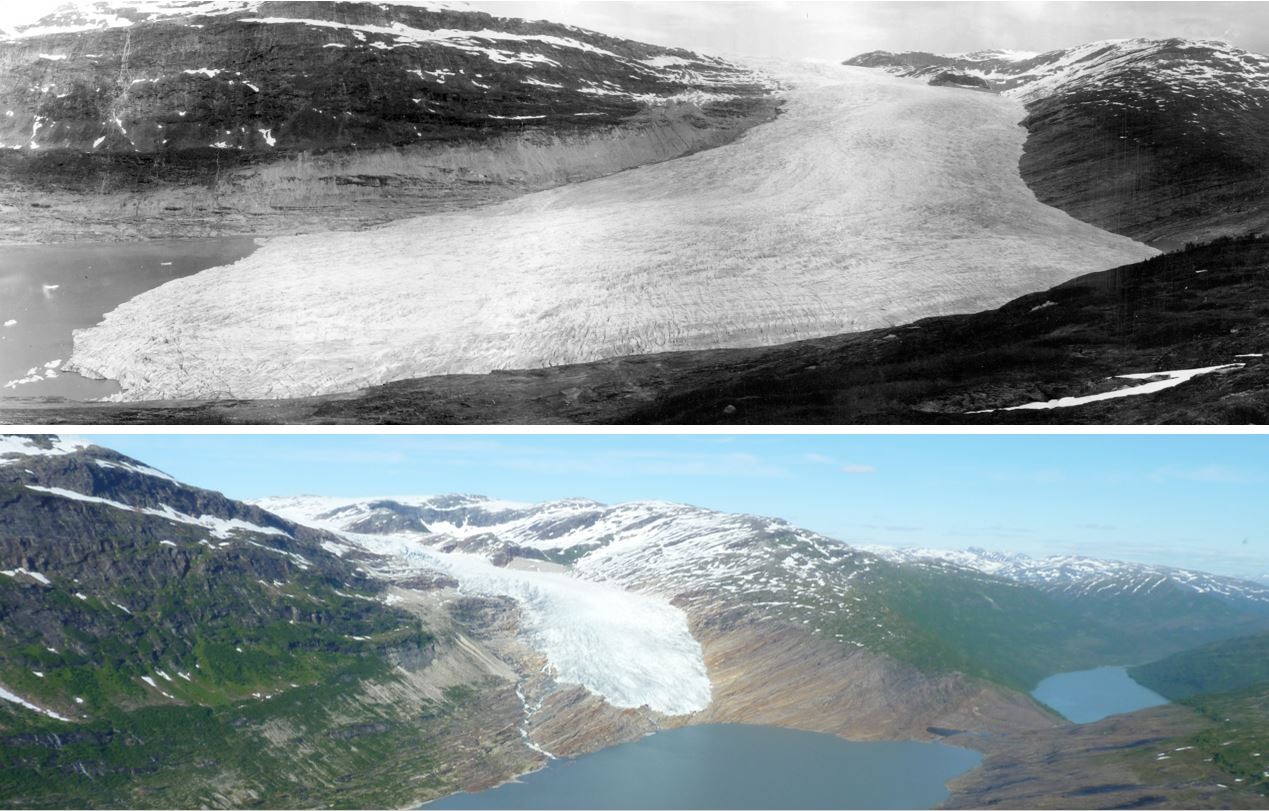 A Geography expert from The University of Manchester has demonstrated the speed and scale of climate change in a new book, by outlining the immense changes to Norway’s largest glacier he has observed during his career.

Honorary Senior Fellow Wilfred Theakstone began studying Austerdalsisen glacier - an outlet of the East Svartisen ice cap which lies across the Arctic Circle - way back in 1959 when he was based at Oslo University.

He moved to The University of Manchester for the first time in 1963, and has continued to monitor the glacier’s changes throughout his long career.

Austerdalsisen reached its maximum size during the 'Little Ice Age' and was only a little smaller when it was first photographed in 1870, when its eastern branch ended in the lake Svartisvatnet. Today, tourists wishing to visit Austerdalsisen have to take a boat across the lake and walk from there to the glacier.

As the glacier retreated during the 20th century, floods occurred every year between 1941-1958 when water passed underneath it, causing damage to communities and infrastructure in the valleys beyond. As a result, a tunnel was excavated beneath Austerdalsisen between 1955-1959 to provide a permanent outlet for the water, and a research project was started to monitor further changes to the glacier.

In the following decades when being observed and photographed by researchers, the rate of retreat increased dramatically and the lake was exposed as the glacier retreated. It now ends 3km from Svartisvatnet, and its front is more than 200m above the position that it occupied in 1870.  Photographs of these stark changes appear in the book.

The decreasing length and marked decrease of thickness of the glacier reflect the area’s warming climate. As temperatures continue to rise, many smaller glaciers around the Arctic Circle are likely to disappear in the next few decades – although an ever-shrinking Austerdalsisen will survive for many years - boreholes drilled through it in 1974 showed that parts of the glacier were more than 350m thick.

More than 96% of Norway’s electricity is generated by water power, and a network of tunnels, dams and reservoirs has been constructed to take water from glaciers to hydroelectric power stations - as glaciers shrink further, this source of supply will decrease.

Another problem is that Austerdalsisen has been a major tourist attraction in Norway, but the distance and time needed to reach it now are greater than they were just a few years ago which may deter future tourists. A loss of income from tourism could therefore have an unwelcome effect on the economy of the area close to the Arctic Circle.

Wilfred’s book - which he published at his own expense to draw attention to the effects of climate change - has been very well received by the Norwegian Water Resources and Energy Directorate, the authority responsible for observations of snow and ice in the country.

‘Norway’s largest glacier: 150 years of change’ can be purchased here.