Drawing on the origins of graphene
Newsroom

Drawing on the origins of graphene 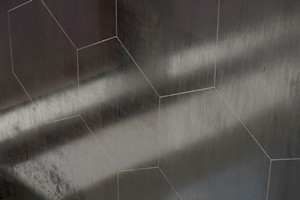 A huge graphite wall drawing has been unveiled at The University of Manchester’s new National Graphene Institute.

Spanning the three upper floors of the recently opened £61m Institute, the permanent artwork depicts the story of graphite and graphene – its geography, geology and development in the North West of England. Graphene is a form of carbon derived from graphite, and at one-atom-thick it promises to revolutionise the material world.

Nobel laureate Sir Kostya Novoselov personally invited Manchester artist Mary Griffiths to create the drawing. Mary’s work has been shown in exhibitions in Manchester, London, and internationally, and she has works in public and private collections. She is also Curator of Modern and Contemporary Art at the Whitworth in Manchester.

The commission is made possible through support from Arts Council England and The University of Manchester.

Griffiths’ drawing is titled From Seathwaite after the place where graphite was first found in the Lake District. A 13 by two metre area of white plaster has been completely covered with many layers of graphite, making a dense and reflective black surface – a practice Mary has developed over the past seven years.

Three abstract drawings have been cut into the black surface, representing graphite’s origins in the Lake District, its hexagonal structure, and its development at The University of Manchester into graphene. A team of four assistants worked with Mary to make the drawing in one month.

From Seathwaite is both made of graphite and is about the history of the material. Its location is uniquely at the heart of production and research into graphene. The drawing is highly reflective and literally reflects the architecture of the National Graphene Institute (NGI), the people who work in it and the city of Manchester.

Sir Kostya said: “It is impressive to see how much the sometimes tragic history of graphite is linked to North West, starting from the first graphite mines in Windscale Fire to graphene.

“I see Mary’s work as part of this history. But most importantly, her work can serve as a link connecting the episodes in the story still to be written.”

Mary added: “It’s incredibly special and a great honour to have been asked by Sir Kostya Novoselov to make this work of art at the heart of the National Graphene Institute. I’ve been using graphite for many years now and am fascinated by it as a material.

“For the NGI to bring art and science together in this new building is very forward thinking, making it possible for me to make my largest ever drawing. It shows how art and science come from similar imaginative places.”

The NGI is the world’s leading centre of graphene research and commercialisation. Academics and industrial partners will work side by side on developing graphene applications in state-of-the-art laboratories and collaborative space.

It was funded from £38m from the Engineering and Physical Sciences Research Council (EPSRC) and £23m from the European Regional Development Fund (ERDF).

Images of the drawing are available from Bureau and The University of Manchester.

Sir Kostya Novoselov and Mary Griffiths are available for interview.

More information about graphene can be found at www.graphene.manchester.ac.uk

Mary Griffiths: (b. 1965, UK) is based in Manchester, and graduated from MA Fine Art at Manchester School of Art in 2009. Griffiths is also Curator of Modern and Contemporary Art at the Whitworth, Manchester, where she has been in post since 2000. Griffiths acclaimed solo exhibitions Still Further (2014-15), and Fathom (2012), took place at Bureau, and in Rangefinder (2014) she showed new work that came from her residency at PS Mirabel, Manchester.

Her work was featured in the publication Drawing Paper (2012), and her monograph, Pictures of War, was published by Carcanet in 2009. Griffiths has works in a number of institutional and international private collections. Works from her solo exhibition Still Further were recently purchased for the national Arts Council Collection. For further information: www.marygriffiths.com

Bureau: is a contemporary art gallery and consultancy founded in 2006 by Sophia Crilly and Mark Kennard. Based in Manchester, the gallery works with represented and invited artists at varying career stages to showcase conceptually rigorous and innovative contemporary visual practice, premiering and commissioning new work, and curating projects on and off site. Bureau’s programme is complemented by support for artists’ practice through international collaborations, residency projects, and participation in international art fairs. Gallery artists exhibit widely internationally, and have works held in significant private collections and museums. For further information: www.bureaugallery.com