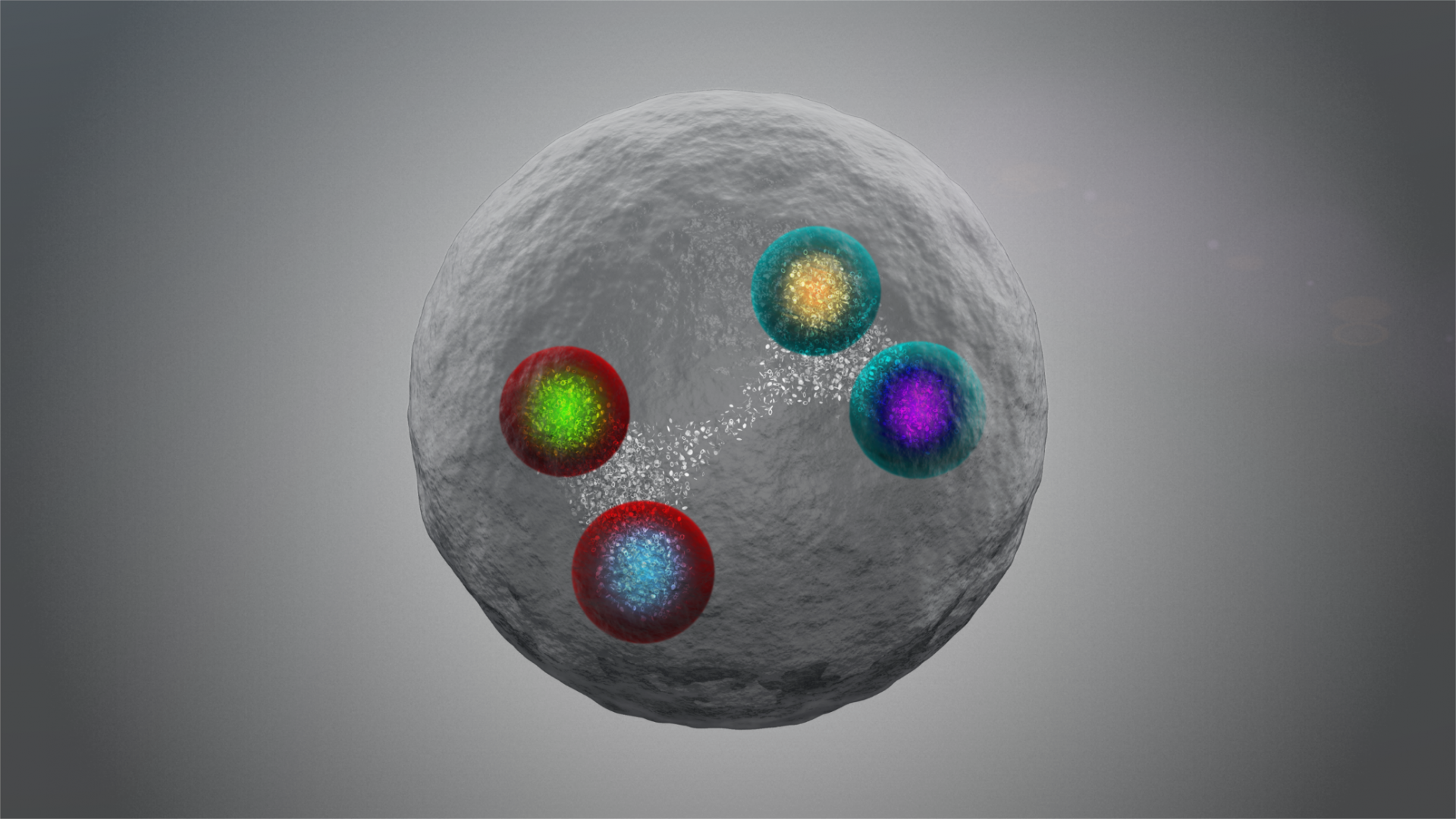 Illustration of a tetraquark composed of two charm quarks and two charm antiquarks, detected for the first time by the LHCb collaboration at CERN.

The Large Hadron Collider Beauty (LHCb) collaboration has observed a type of four-quark particle never seen before. The discovery, presented at a recent seminar at CERN and described in a paper published today is likely to be the first of a previously undiscovered class of particles never before seen by physicists.

The finding will help physicists better understand quarks, a type of elementary particle which is a fundamental building block of all matter. Quarks form together to form composite particles known as hadrons, which include protons and neutrons. This breakthrough new discovery can help scientists now understand the complex ways in which quarks bind themselves together to form these composite.

Quarks typically combine together in groups of twos and threes to form hadrons. For decades, however, theorists have predicted the existence of four-quark and five-quark hadrons, which are sometimes described as tetraquarks and pentaquarks and in recent years experiments including the LHCb have confirmed the existence of several of these exotic hadrons.

These particles made of unusual combinations of quarks are an ideal “laboratory” for studying one of the four known fundamental forces of nature, the strong interaction that binds protons, neutrons and the atomic nuclei that make up matter. Detailed knowledge of the strong interaction is also essential for determining whether new, unexpected processes are a sign of new physics or just standard physics.

“Particles made up of four quarks are already exotic, and the one we have just discovered is the first to be made up of four heavy quarks of the same type, specifically two charm quarks and two charm antiquarks,” says the outgoing spokesperson of the LHCb collaboration, Giovanni Passaleva. “Up until now, the LHCb and other experiments had only observed tetraquarks with two heavy quarks at most and none with more than two quarks of the same type.”

Today’s discovery opens another exciting chapter in this scientific book, allowing us to study our theory of matter particles in an extreme case. This particle is an extreme case - it is an exotic-hadron, containing four quarks rather than the two or three in conventional matter particles, and the first to contain heavy quarks.

Incoming LHCb spokesperson, Professor Chris Parkes from The University of Manchester said: “It’s a great pleasure and honour to take over as LHCb Spokesperson. The collaboration includes over 1400 members from 19 different countries, a community that works together to advance our scientific goals. The University of Manchester and the other ten institutions in the UK play a leading role in the collaboration.

“Today’s discovery opens another exciting chapter in this scientific book, allowing us to study our theory of matter particles in an extreme case. This particle is an extreme case - it is an exotic-hadron, containing four quarks rather than the two or three in conventional matter particles, and the first to contain heavy quarks.

“Studying an extreme system allows scientists to stress-test our theories. Through the study of this particle, and the hope that we will discover further particles in this class in this future, we will test our theory of how quarks combine which also governs protons and neutrons."

The LHCb team found the new tetraquark using the particle-hunting technique of looking for an excess of collision events, known as a “bump”, over a smooth background of events. Sifting through the full LHCb datasets from the first and second runs of the Large Hadron Collider, which took place from 2009 to 2013 and from 2015 to 2018 respectively, the researchers detected a bump in the mass distribution of particles, which consist of a charm quark and a charm antiquark.

The bump has a statistical significance of more than five standard deviations, the usual threshold for claiming the discovery of a new particle, and it corresponds to a mass at which particles composed of four charm quarks are predicted to exist.

As with previous tetraquark discoveries, it is not completely clear whether the new particle is a “true tetraquark”, that is, a system of four quarks tightly bound together, or a pair of two-quark particles weakly bound in a molecule-like structure. Either way, the new tetraquark will help theorists test models of quantum chromodynamics, the theory of the strong interaction.

The paper, Observation of structure in the J/ψ-pair mass spectrum, is published on the arXiv preprint server.