Food of the Gods is a killer

Food of the Gods is a killer 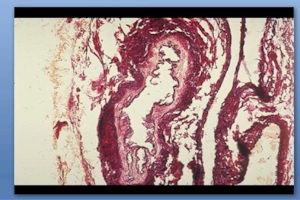 The splendid banquets offered to ancient Egyptian gods may have been delicious and bountiful but they were also a killer, blocking the arteries of the high priests who made the offerings in the temples then took them home to their families.

For the first time a team of scientists at The University of Manchester have combined a new translation of hieroglyphic inscriptions on Egyptian temple walls that give details of the food offered daily to the gods with computed tomography of the mummified remains of priests to assess their atherosclerosis.

They have found that the priests would offer the gods sumptuous meals of beef, wild fowl, bread, fruit, vegetables, cake, wine and beer at the temple three times a day, then take them back home to their families. They also found their mummified remains showed high levels of atheromatous plaques and vascular calcification; that is, blocked arteries.

Author Professor Rosalie David, of the KNH Centre for Biomedical Egyptology in the Faculty of Life Sciences, said: “There couldn’t be a more evocative message: live like a God and you will pay with your health.

“It also shows that blocked arteries caused by rich diets are not just a modern malaise – the problem goes back to ancient civilisations.”

Co-author Professor Tony Heagerty, of the Cardiovascular Research Group at the Faculty of Medical and Human Sciences, added: “There is unequivocal evidence to show that atherosclerosis is a disease of ancient times, induced by diet, and that the epidemic of atherosclerosis which began in the 20th century is nothing more than history revisiting us.”

Fittingly, Professors David and Heagerty started working on the study – published in The Lancet today (26th February) – after sitting next to each other at a Professorial dinner and talking about diet and health through the ages.

They first undertook a new translation of hieroglyphic inscriptions on Egyptian temple walls to reveal the menu of food offered to the gods, how the rituals were performed and how the priests took the food away afterwards to share with their families.

The meals consisted mainly of beef, wild fowl, bread, fruit, vegetables, cake, wine, and beer. Many of these items are laden with saturated fat. For example goose, which was commonly consumed, provides 63% energy from fat, with 20% saturated. In addition the bread that was eaten differed from that consumed today, often being enriched with fat, milk, and eggs, while the cakes were typically made with animal fat or oil. Salt intake was likely to have been high, because it was often used as a preservative, and alcohol, known to increase triglyceride levels, was a common feature of the diet with an intake probably exceeding today’s recommendations. Such rich fare was markedly different to the more frugal, mainly vegetarian diet that most Egyptians ate.

Professor David said: “The priests functioned as a powerful bureaucracy in ancient Egypt: at certain historical periods it was customary for a man to combine a career as a lawyer, doctor, scribe, or teacher with part-time priesthood. The temple itself was never a place of congregational worship and accommodated and protected the resident god whose spirit was believed to reside in the cult statue in the sanctuary. The main function of the priests known as ‘servants of the god’ was to perform regular rituals designed to ensure the wellbeing and comfort of the god who was believed to reciprocate by providing benefits for Egypt, its King, and the population at large.

“The most important duty of the priest was his three times daily performance of this temple ritual during which the priests, while acting on behalf of the King who could not be present in every temple, cleansed, dressed, and fed the god’s statue in the temple sanctuary. At the conclusion of the service, the priests removed the consecrated food from the altar and as part of their regular payment, it was divided up among the senior temple personnel who took it home to feed their families.

“We have been able to show how temple inscriptions, which recorded daily rituals, can be combined with the paleopathological investigation of mummies to provide additional evidence about the priests and their diet. Additionally, some inscriptions even indicate that sometimes unscrupulous priests took the divine rations from the temple without first offering them to the gods.

“Inscriptions on coffins associated with individual mummies provide the owner’s names and titles and this information can be used to associate the diseases discovered in these mummies with specific social groups, in this case the priests and their families.”

The Manchester team also looked at computed tomography assessments of atherosclerosis in a selection of 22 mummies of Egyptians with high social status. In 16 of these where the hearts or arteries could be identified, nine mummies showed evidence of vascular calcification. Although arteriosclerosis has been clearly identified in mummies, it seems to have been fairly uncommon in ancient Egypt. They believe this reflects the different diets eaten by most Egyptians and the affluent elite, as well as the low life expectancy of 40–50 years even among the more affluent members of society.

Professor Heagerty said: “The vast bibliography associated with the examination of Egyptian mummies provides overwhelming evidence that atheroma was seen in a variety of vascular beds.

“Also there is clear evidence of vascular calcification, which has been increasingly linked as an adverse prognostic finding associated with accelerated atherosclerosis and an increased incidence of coronary artery disease. The presence of vascular calcification would suggest that these findings are true ante-mortem effects rather than those produced by the mummification agents such as natron.

“The explanation for these frequent pathological findings almost certainly resides in a diet rich in saturated fat that was confined to the elite, while most of the population remained vegetarian.”

‘The art of medicine: Artherosclerosis and diet in ancient Egypt’ (The Lancet) is available.