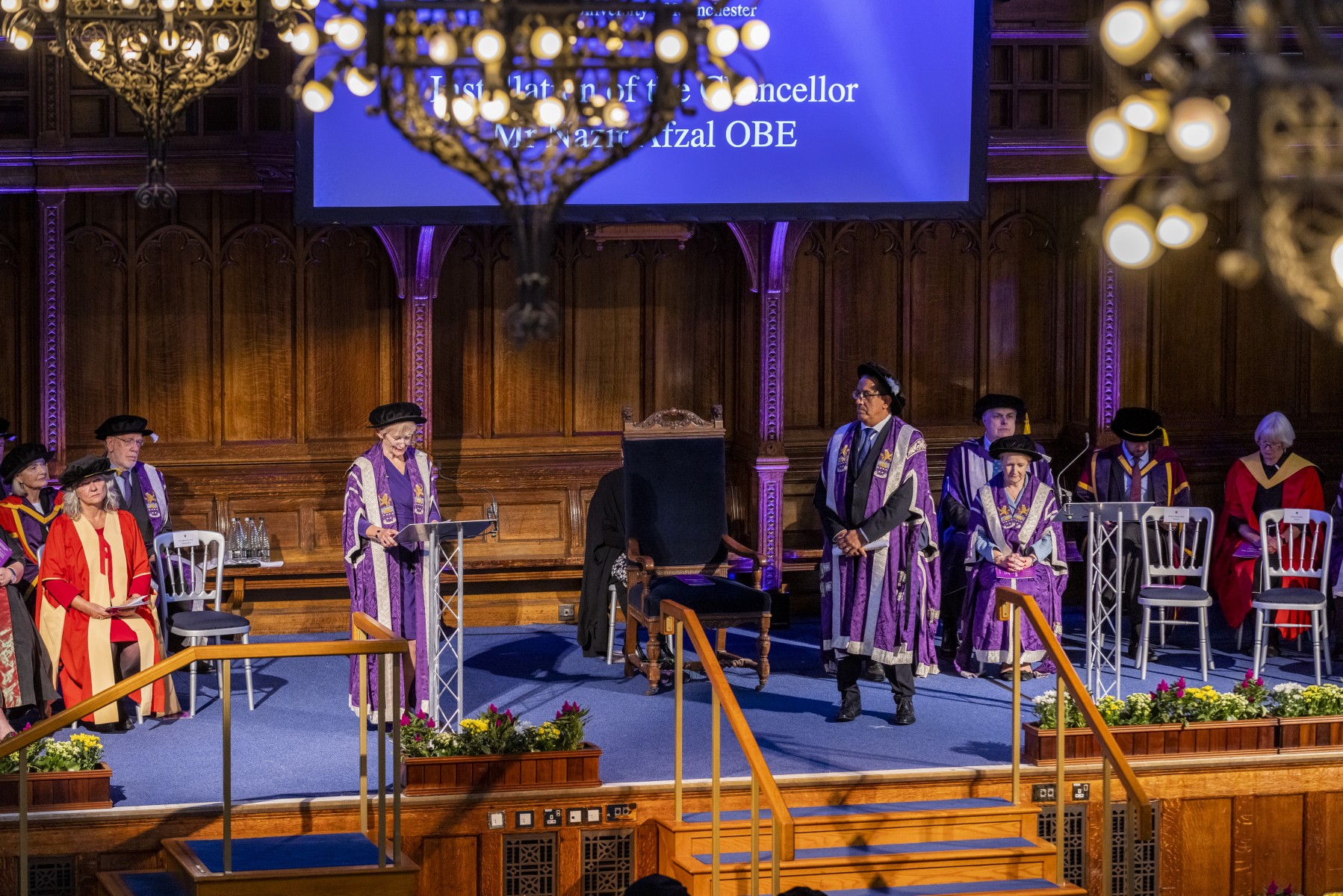 The event saw Dr Amani Abou-Zeid, Edward Astle and Julie Hesmondhalgh become honorary graduands of the University. Nazir Afzal now succeeds poet Lemn Sissay who has been Chancellor for the past seven years, although Lemn will be remaining within the University community as he takes up an Honorary Chair in Creative Writing.

Giving the annual Foundation Day address President and Vice-Chancellor, Professor Dame Nancy Rothwell said: "Our people are at the very heart of the University and I want to thank my colleagues, students, alumni, friends for their tremendous effort and commitment throughout the year.

“We’re all aware that these are uncertain times and we cannot underestimate the challenges and difficulties, such as cost of living, are creating for our community and society more generally. We will continue to adapt and lead with the resolve and spirit that Manchester is known for and seek to deliver change that is responsible, inclusive and sustainable.”

The Chancellor is the ceremonial head of the University and ambassador who works with the President and Vice-Chancellor and other senior officers to promote the University's achievements regionally, nationally, and internationally.

Nazir Afzal OBE was Chief Crown Prosecutor for North West England and formerly Director in London. He was Chief Executive of the country’s Police and Crime Commissioners and, most recently, National Adviser to the Welsh government.

Speaking at Foundation Day Nazir Afzal said: "Becoming Chancellor is an immense privilege, I was born in Birmingham, nurtured professionally in London and made in Manchester, which is now proudly my family’s home. To be an ambassador for the work the University does and the people who do it will be an extraordinary honour and I can’t wait to get going.

“This University builds great things, it makes massive technological advances, it explores the universe, cures disease, enriches our culture, reaches for the stars, aspires to intelligence and does not belittle it. It looks for the truth and it will find the truth. Manchester is nothing without its people and it has some damn fine people and I’m proud to be your Chancellor.”

Becoming Chancellor is an immense privilege, I was born in Birmingham, nurtured professionally in London and made in Manchester, which is now proudly my family’s home. To be an ambassador for the work the University does and the people who do it will be an extraordinary honour and I can’t wait to get going.

During a 30-year career, he has prosecuted some of the highest profile cases in the country, advised on many others and led nationally on several legal topics including violence against women and girls, child sexual abuse and honour-based violence. As Chief Crown Prosecutor, he had responsibility for more than 100,000 prosecutions each year. His prosecutions of the so-called ‘Rochdale grooming gang’ and hundreds of others were ground-breaking and changed the landscape of child protection.

Nazir has received many accolades. In 2005, he was awarded an OBE by the late Queen for his work. He also had the honour of being the only lawyer to ever prosecute a case before the Queen. Nazir was also selected for the Asian Power 100 and the Muslim Power 100 list in recognition of his position as one of the 100 most influential leading Muslims and Asians in the UK.

This year honorary doctorates were awarded to the following:

Dr Amani Abou-Zeid is the twice-elected African Union Commissioner for Infrastructure, Energy and Digitalisation. For more than 35 years, Amani has served in international organisations, leading and implementing national, regional and cross-continental infrastructure projects in Africa and both launching and integrating transformative initiatives, such as the Single African Air Transport Market, Africa’s Single Electricity Market and the Digital Transformation Strategy.

Amani has a BSc in Electrical Engineering from Cairo University; an MBA in Project Management from Université Senghor; an MPA from Harvard School of Government; and a PhD in Socio-Economic Development from The University of Manchester. She also has a degree in Arts from Université Sorbonne-Paris IV. Amani was decorated with the Wissam Alaouite of Morocco, a Royal honour, and has often been selected ‘Most Influential Woman in Africa’. She previously received an Outstanding Alumni Award from The University of Manchester. 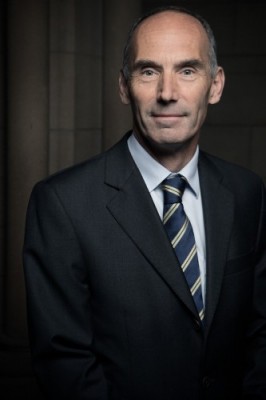 Edward Astle was Chair of the Board of Governors at The University of Manchester from September 2016 to August 2022. Edward, who joined the Board of Governors in 2014, spent most of his career in the telecoms and utilities sectors where he served on the boards, and ran substantial divisions, of Cable and Wireless, BICC and National Grid. From 2008 to 2013 Edward was Pro-Rector (Enterprise) at Imperial College London.

Edward is currently Non-Executive Director and Chair of the Audit, Risk and Compliance Committee of Openreach, chair of the charity UpReach, which helps students from the most disadvantaged backgrounds get top graduate jobs; and is a trustee of the Lakeland Arts Trust. He has previously held non-executive positions on other company and charity boards. Edward was educated at Manchester Grammar School and Queen’s College Oxford and holds an MBA from INSEAD.

Julie Hesmondhalgh is a Manchester-based actor, writer, theatre producer and activist. She trained at LAMDA and set up Arts Threshold Theatre in the early 90s. She co-runs Take Back, a political theatre collective, and the fundraising group 500 Acts of Kindness. Her Working Diary was published in 2019. Her second book, An A-Z for Actors (Stuff I’ve Learnt, Stuff I’m Still Learning) will be published this year. Julie is a patron and supporter of many organisations including the Sophie Lancaster Foundation, Reuben’s Retreat and Arts Emergency.

Her theatre work includes: The Greatest Play in the History of the World; Mother Courage and Her Children; The Almighty Sometimes; Wit (winner of Best Female Performer 2017 MTAs); Black Roses: The Killing of Sophie Lancaster (winner of Best Studio Performance 2012, MTAs) and Blindsided, all at Manchester’s Royal Exchange Theatre. In addition, Julie appeared in The Report at the Royal Court, There Are No Beginnings at Leeds Playhouse and God Bless the Child at the Royal Court Jerwood Theatre Upstairs. Her TV credits include: You & Me; The Pact; The A Word 3; The Trouble with Maggie Cole; Dr Who; Catastrophe; Broadchurch (BAFTA-nomination for Best Supporting Actress); Happy Valley; Black Roses (Royal Television Society Best Actress 2014); Moving On; Inside No 9; Cucumber; and playing the role of Hayley Cropper in Coronation Street (1998-2014) (National TV Award 2014 and Royal Television Society Award 2013). Julie is also a regular voice on BBC Radio 4, including in dramas, documentaries and Pick of the Week.