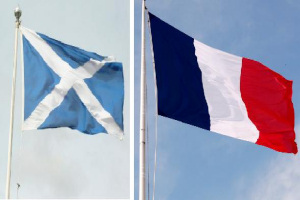 A University of Manchester historian has uncovered evidence which shows how a defensive alliance against England between Scotland and France might never have formally ended – potentially making it the longest in history.

In a paper to be published next year, Dr Siobhan Talbott argues the Franco-Scottish Auld Alliance of 1295 survived centuries of enmity and war between Britain and France – even after the Act of Union was signed in 1707. Trade, she says, is a major reason for its longevity.

The prevailing view of historians that Scotland sided with the English, moving away from her friendship with France after 1560, when the country converted to Protestantism, is also disputed by Dr Talbott.

J. Macpherson, published in Scottish Field in 1967, says Dr Talbott, showed that France refused to accept Westminster’s abrogation of the Scottish side of the Auld Alliance in 1906, following the Entente Cordiale between Britain and France. By French law, a Scotsman born before 1907 still possesses the full rights and privileges of Franco-Scottish nationality.

The 716-year-old citizenship and trading privileges enjoyed by Scots in France, she suggests, are possibly intact today.

Dr Talbott said: “It’s going to be difficult to prove conclusively that Auld Alliance of 1295 is the longest in history - but there is strong evidence to suggest that this could indeed be the case.

“If we accept 1906 as an 'end date', this would make the Auld Alliance 611 years old, compared to 638 years for what many regard as world’s oldest alliance between England and Portugal.

“However, when Charles de Gaulle spoke in Edinburgh in June 1942, he stated that the Auld Alliance was 'the oldest alliance in the world'.”

Previously, historians have argued the 1560 Treaty of Edinburgh, along with Scotland’s conversion to Protestantism, ended the Auld Alliance between Scotland and France.

But not so according to Dr Talbott: some French troops remained in Scotland and there is no reference to ending the Alliance in the text.

Even during the eighteenth century – after the Act of Union was signed – Scotland and France continued to have an active and close relationship, based on the historic Auld Alliance.

Trade flourished between the two countries, even though France was Catholic and Scotland Protestant.

Scottish merchants paid less or no customs at some French ports, whereas some ports would not trade with the English at all.

The Scots exported a range of goods including coal, wool and animal skins to France.

Despite some difficulties for Protestant Scots, there were well established communities in Bordeaux, Paris and La Rochelle throughout the seventeenth century.

Dr Talbott said: “It has been previously recognised that trade continued to take place between the two countries in the eighteenth century.

“But by examining merchants’ records from the period, I can now say that it was much more extensive than realised, and that it continued despite conflict such as war which many historians have maintained prevented it.

She added: “Scots saw their country as an independent entity throughout  the eighteenth century, even after the Union of the Scottish and English monarchies in 1603 and the Union of their parliaments in 1707 -  and other European nations regarded them like that too.

“This might explain why Scots seem to have more of a notion of independence than the English, who appear to more readily see themselves as 'British' - and it will be interesting to see if the results of the 2011 Census and the proposed 2014 referendum on Scottish Independence reflects this.”

Dr Talbott’s research has been awarded the prestigious 2011 Pollard Prize by the Institute of Historical Research, University of London, for the best seminar given by a scholar within one year of completing their PhD.

The paper by Dr Talbott will be published in the journal Historical Research and is entitled: ‘If you were hier you could gaine what you please, for there is many English and severall Scots that you might deall with’: British Commercial Interests on the French Atlantic Coast, c. 1560-1713'.

It will be published in the IHR's journal, Historical Research next year.

'Beyond ‘the antiseptic realm of theoretical economic models’: New Perspectives on Franco-Scottish Commerce and the Auld Alliance in the Long Seventeenth Century' is being published later this year in the Journal of Scottish Historical Research, 31:2 (November 2011). It won the Economic and Social History Society of Scotland's Research Essay Prize for 2009.

The research was carried out in national and regional archives of France, USA and UK.

Dr Talbott is available for interview