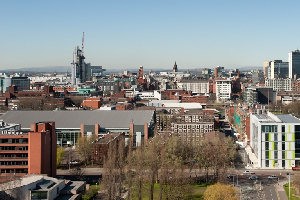 The University of Manchester is to invest £1 billion over the next ten years to create a world-class campus for our staff and students.

The Estates Master Plan, which was approved by the University’s Board of Governors on Wednesday (10 October 2012), will create a single campus and will involve the construction of new teaching and research buildings, student facilities and major improvements to the public realm.

The first phase of the plan, costing around £700 million, will be delivered over the next six years. It includes the building of a new engineering campus, new centres for the School of Law and Manchester Business School, a major refurbishment of the University Library, a bigger and better Students’ Union and a new Medical School for our students in Dover Street. There would also be investment in a Combined Heat and Power Facility, as well as a new car park and the refurbishment of the telescope at Jodrell Bank.

The University will also spend several million pounds to improve the University’s public realm and landscaping in order to capitalise on the future improvements to Oxford Road, which will see wider pavements, tree-lined boulevards and the removal of all cars during 2015.  Students will benefit from major IT upgrades, a new teaching block, refurbishments of several teaching rooms and extension to the Students’ Union Building.

Outline plans have been drawn up for a second phase which is expected to cost a further £300 million and would begin in 2018 and end in 2022. This second phase would create a Biomedical Campus around the existing Stopford Building, a new health centre for staff and students, and includes refurbishments in the Schools of Computer Science, Earth, Atmospheric and Environmental Sciences, Mathematics and Chemistry.

Director of Estates and Facilities Diana Hampson said: “Since the merger of the two universities in 2004, it has been our ambition to bring all of the academic activity together on a single site south of the Mancunian Way, which will improve efficiency, improve the student experience and reduce the University’s carbon footprint.

“This visionary building programme will give us one of the most modern campuses in the world, where the vast majority of our students will be studying in brand new or refurbished buildings.”

The new investment is in addition to the £750 million spent since 2004 which has already seen the completion of ten new buildings and many large scale refurbishments.

The majority of schools will not move out of their present base on the North Campus until the new engineering campus is completed in 2018 and the University will continue to invest in and maintain the North Campus to a high standard, with significant investment over the next six years.

“Our long-term aim, as restated in our Manchester 2020 Vision, has been to create a world leading university that would compete with the best universities in the world and would occupy a single, outstanding campus, where some of our beautiful old buildings would stand alongside the very best in modern facilities for our research and our students.”