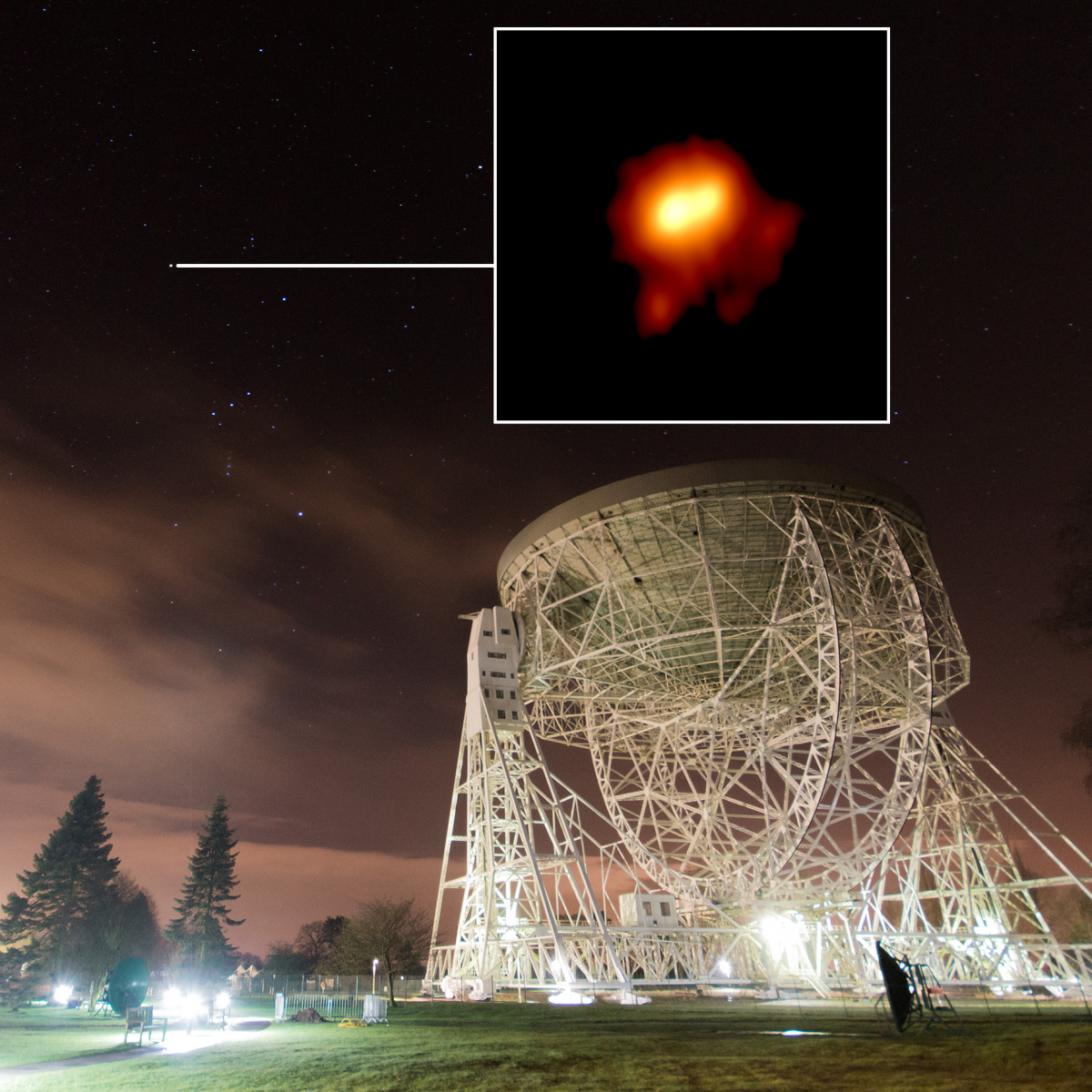 A new image of the outer atmosphere of Betelgeuse

Astronomers have released a new image of the outer atmosphere of Betelgeuse – one of the nearest red supergiants to Earth – revealing the detailed structure of the matter being thrown off the star.

The new image, taken by the e-MERLIN radio telescope array operated from the Jodrell Bank Observatory in Cheshire, also shows regions of surprisingly hot gas in the star’s outer atmosphere and a cooler arc of gas weighing almost as much as the Earth.

Betelgeuse is easily visible to the unaided eye as the bright, red star on the shoulder of Orion the Hunter. The star itself is huge – 1,000 times larger than our Sun – but at a distance of about 650 light years it still appears as a tiny dot in the sky, so special techniques combining telescopes in arrays are required to see details of the star and the region around it.

The new e-MERLIN image of Betelgeuse – published in the journal Monthly Notices of the Royal Astronomical Society, shows its atmosphere extends out to five times the size of the visual surface of the star. It reveals two hot spots within the outer atmosphere and a faint arc of cool gas even farther out beyond the radio surface of the star.

The hot spots are separated by roughly half the visual diameter of the star and have a temperature of about 4,000-5,000 Kelvin, much higher than the average temperature of the radio surface of the star (about 1,200 Kelvin) and even higher than the visual surface (3,600 Kelvin).  The arc of cool gas lies almost 7.4 billion kilometres away from the star – about the same distance as the farthest Pluto gets from the Sun. It is estimated to have a mass almost two thirds that of the Earth and a temperature of about 150 Kelvin.

Lead author Dr Anita Richards, from The University of Manchester, said that it was not yet clear why the hot spots are so hot. She said: “One possibility is that shock waves, caused either by the star pulsating or by convection in its outer layers, are compressing and heating the gas. Another is that the outer atmosphere is patchy and we are seeing through to hotter regions within. The arc of cool gas is thought to be the result of a period of increased mass loss from the star at some point in the last century but its relationship to structures like the hot spots, which lie much closer in, within the star’s outer atmosphere, is unknown.”

The mechanism by which supergiant stars like Betelgeuse lose matter into space is not well understood despite its key role in the lifecycle of matter, enriching the interstellar material from which future stars and planets will form. Detailed high-resolution studies of the regions around massive stars like the ones presented here are essential to improving our understanding.

Dr Richards, who is based in Manchester’s School of Physics and Astronomy, added: “Betelgeuse produces a wind equivalent to losing the mass of the Earth every three years, enriched with the chemicals that will go into the next generation of star and planet formation.  The full detail of how these cool, evolved stars launch their winds is one of the remaining big questions in stellar astronomy.

“This is the first direct image showing hot spots so far from the centre of the star. We are continuing radio and microwave observations to help decide which mechanisms are most important in driving the stellar wind and producing these hot spots. This won't just tell us how the elements that form the building blocks of life are being returned to space, it will also help determine how long it is before Betelgeuse explodes as a supernova.”

Future observations planned with e-MERLIN and other arrays, including ALMA and VLA, will test whether the hotspots vary in concert due to pulsation, or show more complex variability due to convection. If it is possible to measure a rotation speed this will identify in which layer of the star they originate.

The new Betelgeuse image (J-peg) and a copy of the paper that accompanies it, entitled ‘e-MERLIN resolves Betelgeuse at wavelength 5 cm: hotspots at 5R*,’ are available on request.

e-MERLIN, the UK’s national radio astronomy facility, is operated from the Jodrell Bank Observatory by The University of Manchester on behalf of the UK Science and Technology Facilities Council. Its power lies in its combination of the sharpness of view afforded by telescope separations of up to 217km, and its ability to detect very faint signals resulting from the array’s high bandwidth optical fibre connections. By connecting seven large radio telescopes, stretching from Cambridge to Cheshire (including the Lovell Telescope at Jodrell Bank), e-MERLIN is able to produce images with the same detail as the Hubble Space Telescope but at radio rather than visible wavelengths. The signals from the telescopes are brought to Jodrell Bank on a dedicated optical fibre network whose high bandwidth allows the detection of very faint sources of radio emission. At Jodrell Bank 210 Gb of data arrive from the seven telescopes each second. These signals are combined in the correlator, a specialised supercomputer which carries out one thousand million million operations per second. For the signals from each telescope to be accurately combined, they must be synchronised at the level of a few million millionths of a second. The application of these fibre technologies and signal synchronisation techniques have led to e-MERLIN being designated as a pathfinder for what is planned to be the world’s largest radio telescope, the Square Kilometre Array.