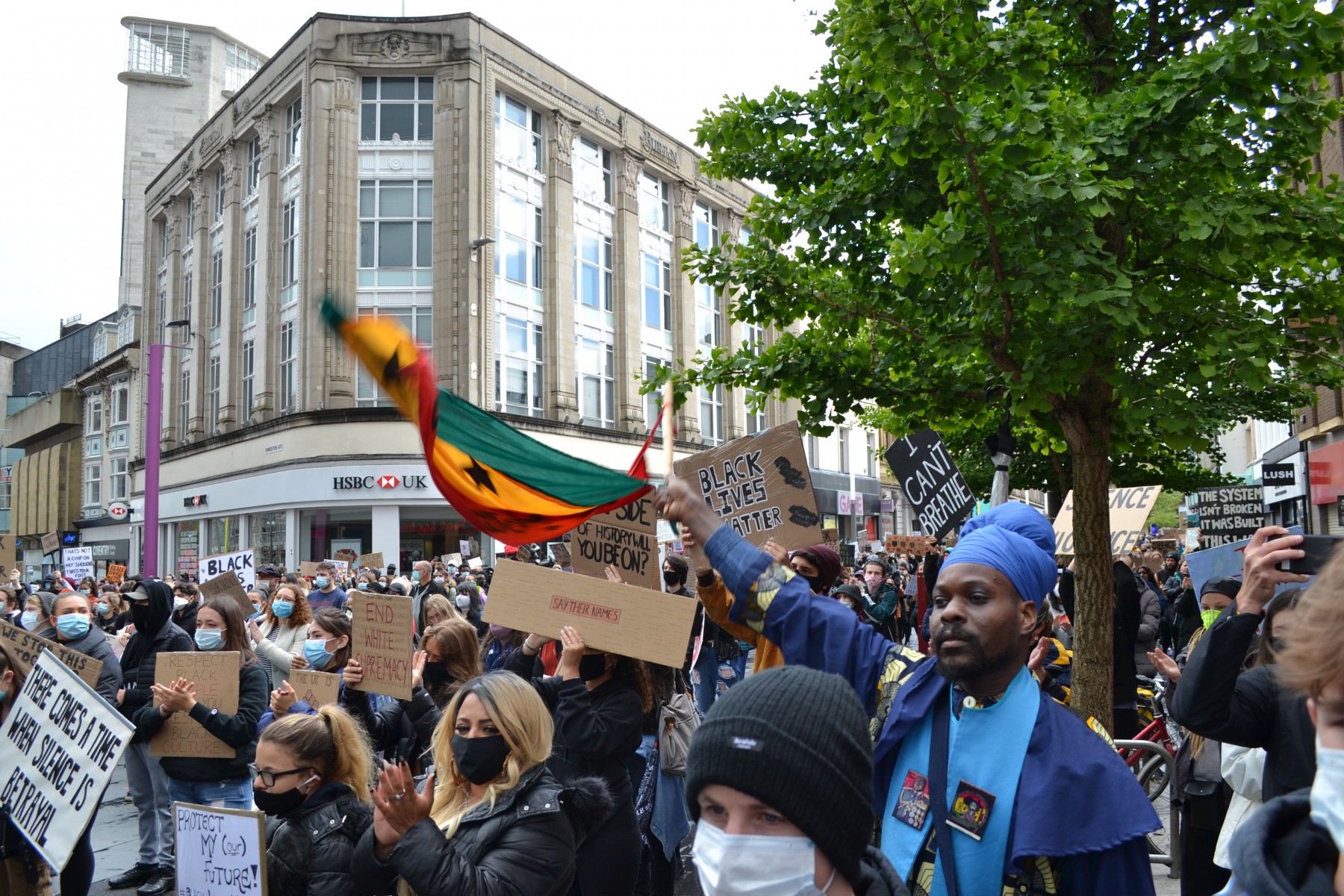 A PhD candidate in the Department of Drama has edited and published an anthology of poems responding to the Black Lives Matter movement.

In early 2020, poet and journalist Ambrose Musiyiwa embarked on a fully-funded PhD at the University of Manchester, as part of a collaboration with Community Arts North West. Working within the Department of Drama, he is conducting research on refugee-heritage artists and performing arts practices in the UK.

As a writer, Ambrose’s poems have been featured in numerous anthologies, while his journalism, short stories and essays have been published in newspapers and magazines in the UK, Zimbabwe, the United States and South Korea.

Ambrose’s latest project has seen him edit and publish an anthology of poems, entitled Black Lives Matter: Poems for a New World (CivicLeicester, 2020). The anthology was the end result of a June 2020 call for poems and short prose on the theme “Black Lives Matter”. From nearly 500 worldwide submissions, Ambrose selected 107 poems from 95 writers to feature in the anthology, which is now available to purchase.

To find out more about Ambrose, his work at the University and Black Lives Matter: Poems for a New World, we sent him some questions.

Tell us a bit about yourself, your areas of interest and your work prior to joining The University.

I have an active interest in what happens in that place where community, activism, migration and the arts meet. And I am interested in what happens at the border and in the margins and in how, sometimes, this changes what happens at the centre. This interest is also what drew me to the University of Manchester and to the Collaborative Doctoral award with the Drama Department and Community Arts North West and to the work I am doing now where I am researching refugee heritage artists and performing arts practices in the UK.

Related to this, among other things, I coordinate Journeys in Translation, an international, volunteer-driven initiative that is translating poems from Over Land, Over Sea: Poems for those seeking refuge (Five Leaves Publications, 2015) from English and into other languages. Over Land, Over Sea came about because poets in the East Midlands were looking for a way through which they could intervene in the deeply problematic discourse that was taking place on migration in 2015 and, at the same time, support people on the move and those looking for refuge.

In addition to being a cultural intervention, Over Land, Over Sea is being sold to raise funds for Médecins Sans Frontières, the Nottingham and Nottinghamshire Refugee Forum and Leicester City of Sanctuary.

Journeys in Translation builds on this in that it is translating Over Land, Over Sea into other languages and the translated editions are being sold to raise funds for more groups that are working with people on the move and those looking for refuge.

How are the translation efforts going?

Over Land, Over Sea is now available in Italian as Per terra e per mare: Poesie per chi è in cerca di rifugio which was translated by Pietro Deandrea and released from CivicLeicester in September 2020.

The anthology is being sold to raise funds for After18 who are based in Leicester, here in the UK, and who support asylum seeking, unaccompanied children and young people; Mosaico: Azioni per i rifugiati who are based in Torino, Italy and who support people who have moved to or sought refuge in Italy; and, Watch The Med AlarmPhone who provide a 24 hour hotline for boats in distress in the Mediterranean.

Tell us about your experience of working on Black Lives Matter: Poems for a New World. Why was this project important to you, and what do you hope readers will take from the anthology’s contents?

In addition to coordinating Journeys in Translation, I run CivicLeicester, an indy publisher that uses events, social media platforms, video, photography, and print and digital media to highlight conversations.

Black Lives Matter: Poems for a New World is part of this work.

The anthology is important because of its focus on racism, how racism is institutionalised and structural, the effect it has, and what ought to be done about it. The anthology has been described as "poignant", "outstanding", "new" and "relevant".

One reviewer says, "This is an excellent new anthology of very diverse poems. All speak poignantly to the issues of BLM. Some are background stories, some are individual stories, stories of anguish and stories of hope. Some provoke and some soothe." Another reviewer says the anthology addresses "the issues, the emotions, and the hopes percolating from the urgent concerns over Black Lives Matter."

If I hope for anything, it is that people in this country and people around the world will keep insisting that Black Lives Matter and that they will ensure racism and the structures it creates and through which it preserves itself are dismantled.

Tell us about your experience, so far, of researching at The University. How is the partnership between The University and Community Arts North West valuable?

Both the University and Community Arts North West (CAN) have a track record of working on the issues I will be building on in my research. Examples of this include the work my supervisors, Dr Alison Jeffers and Professor Jenny Hughes have been doing individually and as part of projects like In Place of War. Stella Barnes, who is also my supervisor and is based at CAN has worked for many years in theatre with people looking for refuge. Similarly, CAN has many years’ experience organising workshops, performances and festivals with people from refugee heritage backgrounds.

The experience I have had working with the University and CAN, so far, has been great even taking into account that I am starting my research in the middle of a global pandemic that has seen villages, towns, cities and whole countries go into lockdown and which has meant that a lot of the work that, in previous years, would have been done onsite has had to be done virtually.

At the same time, Britain is in the process of leaving the European Union. And Black Lives Matter has drawn attention to institutional and structural racism in ways that I, for one, have not seen happen in this country in this way before.

Looking to the future, do you have any plans, goals or dreams that your current work might help you achieve?

The PhD research I am doing is a major undertaking. Everything I will be doing for the next three and a half years will be tied to this research. My hope is I will do this in a way that does justice to the research and the field.

Finally, what literature has been keeping you inspired this year?

As much as the literature, it’s the people that I’ve met who have kept me inspired. I have met many people who are committed to making the world a bit better as a place and who are inspiring in ways that are transformative.

These meetings evoke a sense that a different world is possible. In some ways, they remind me of the hope and energy people generated in 2015 when, in the context of what is popularly referred to as the “refugee crisis”, many people from Britain and other parts of the world responded to how people on the move were dying in the Mediterranean trying to get to Europe. People stepped in when they saw that their governments were going to let people perish in the Mediterranean and they mobilised and started running search and rescue missions in the Med and they went to informal settlements and camps to try and support people on the move and those looking for refuge. This was inspiring.