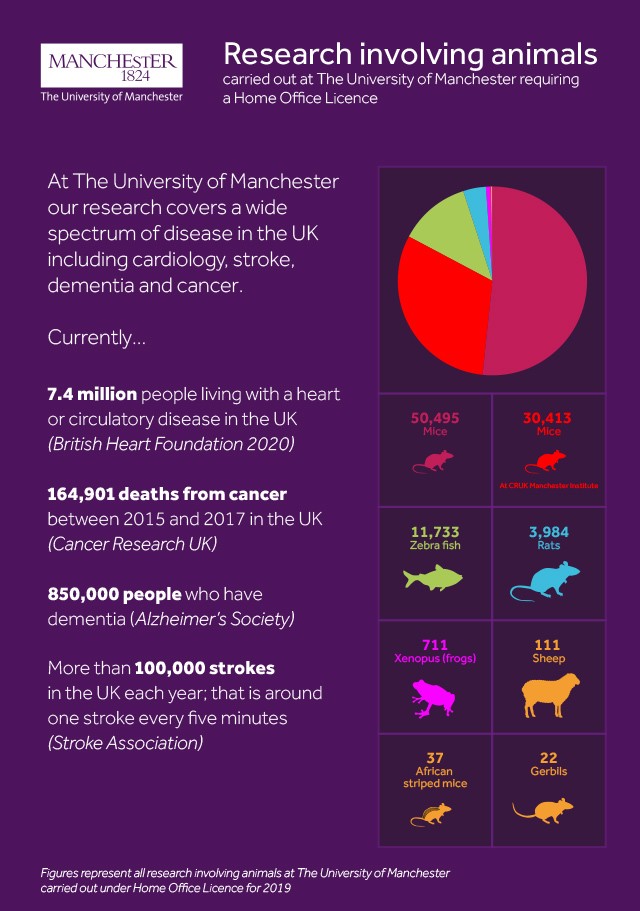 Understanding Animal Research (UAR), an organisation that promotes open communications about animal research, has today released a list of the ten organisations in Great Britain that carry out the highest number of animal procedures – those used in medical, veterinary and scientific research. These statistics are freely available on the organisations’ websites as part of their ongoing commitment to transparency and openness around the use of animals in research.

The figures coincide with the publication of the national Home Office statistics for animals used in research in 2019.

The ten organisations are listed below alongside the total number of procedures that they carried out in 2019. Each organisation’s name links to its animal research webpage, which includes more detailed statistics. This is the fifth consecutive year organisations have come together to publicise their collective numbers and examples of their research.

To accompany the Top Ten list, UAR has also produced a list (see appendix) of 42 organisations in the UK that have shared their own statistics on the animal research they carried out in 2019.

All organisations are committed to the ‘3Rs’ of replacement, reduction and refinement. This means avoiding or replacing the use of animals where possible; minimising the number of animals used per experiment and optimising the experience of the animals to improve animal welfare. However, as institutions expand and conduct more research, the total number of animals used can rise even if fewer animals are used per study.

"Animal research is essential for the development of new drugs and vaccines for diseases like cancer, dementia, and COVID-19. Over the last six months we have witnessed researchers from across the world work tirelessly to develop new treatments and vaccines for COVID-19, which it is hoped can prevent thousands of further deaths. Existing drugs, developed using animals, have also been found to be effective against the virus: Remdesivir, an anti-viral drug that was initially developed using monkeys to treat Ebola, is being used to treat severe cases of COVID-19, and dexamethasone, a steroid originally developed using animal research to treat rheumatoid arthritis, has been found to save the lives of some patients on ventilators. Research involving commonly used animals like rodents, and more unusual animals like llamas, alpacas, bats, and hamsters has also yielded important information on how COVID-19 can be treated."

“At the Crick our researchers are working hard to understand a wide range of devastating diseases. While we use alternatives to animal research wherever possible, these diseases are complex, frequently interacting with and affecting multiple parts of the body. Research into what causes different diseases and finding new ways to prevent and treat them often requires us to work with animals.”

“The COVID-19 pandemic has highlighted the importance of research using animals in understanding the biology of diseases and developing new treatments and vaccines. The MRC is committed to ensuring that this research is carried out to the highest possible levels of animal welfare and to replacing, refining and reducing the use of animals in research wherever possible.”