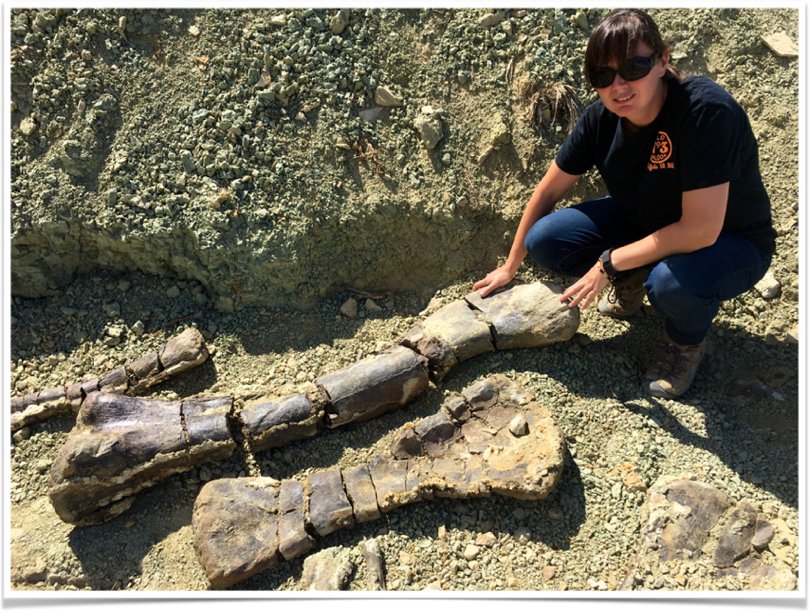 Unearthing the secrets of the American ‘Jurassic Mile’

Scientists at The University of Manchester have joined forces with a major US Museum and European partners to explore an extraordinary Jurassic dinosaur site in the badlands of Wyoming, USA.

Scientists from The University of Manchester will be the academic leaders on the newly announced $27.5 million (£20m) project to explore, research and eventually exhibit fossils from a recently discovered palaeontological site known as the ‘Jurassic Mile’.

The Children’s Museum of Indianapolis will serve as the Mission Jurassic leader, with The University of Manchester’s Prof. Phil Manning and Dr. Victoria Egerton as the lead scientists in the project. The team are partnering with The Natural History Museum in London and the Naturalis Biodiversity Center in Leiden, Netherlands. As a result, more than 100 scientists from three countries will join forces to work in the Morrison Formation of Wyoming to reveal new secrets from this enigmatic period of time.

Prof Manning, Dr. Egerton and the team are calling the fossil-rich, mile-square plot of land, “The Jurassic Mile.” There are four main quarries within the multi-level, 640-acre site that offer a diverse assemblage of Morrison Formation articulated and semi-articulated dinosaurs that has also yielded associated animals, fossil plants in addition to rarely associated dinosaur trackways of the Late Jurassic Period 150 million years ago.

“It is splendid that such an important site has been discovered at just the right time, as the science of paleontology is adapting existing and new imaging techniques to unpick the fossil remains of extinct life.” said Prof Manning, “The imaging work that we undertake at Manchester is already world-leading and this is a great opportunity to develop this research with other world-class institutions.”

Nearly 600 specimens, weighing more than six tons, have already been collected from this site over the past two years despite the fact that only a fraction of the site has been explored. Included in that are the bones of an 80-foot-long Brachiosaur and 90-foot-long Diplodocid, which have been discovered at the Jurassic Mile. A 6’6” sauropod (Brachiosaur) scapula (shoulder bone) and several jackets containing articulated bones are among the material collected during the 2018 field season. A 5’1” (1.5 metre) femur was revealed at the announcement in Indianapolis on March 25, 2019.

Dr. Jeffrey H. Patchen, President and CEO of The Children’s Museum of Indianapolis stated, “We are bringing together an extraordinary international team for the first time that will critically analyze portions of the Morrison Formation in new ways.” Patchen went on to say, “This project reflects a natural synergy between three world-renowned museums, their research scientists and highly-respected research universities, each providing unique elements to complete one of the most interesting chapters in the evolution of Earth.”

It is splendid that such an important site has been discovered at just the right time, as the science of paleontology is adapting existing and new imaging techniques to unpick the fossil remains of extinct life. The imaging work that we undertake at Manchester is already world-leading and this is a great opportunity to develop this research with other world-class institutions.”

Dr. Egerton from the Department of Earth and Environmental Science explained that, “The preservation quality and sheer amount of plants at the Jurassic Mile is extraordinary. During this period, there were no flowering plants and this site provides significant insight to what these giant animals ate and how they may have grown to be so large.”

The Children’s Museum of Indianapolis’ is the world’s largest children’s museum. Its current Dinosphere exhibit has captivated more than 15 million visitors since it opened in 2004 and inspired new generations of explorers and scientists. There, visitors are introduced to some of the finest examples of past life including a rare mummified dinosaur named Leonardo. The first T. rex ever discovered with a wish bone (furcula) and a Gorgosaurus with a brain tumor (currently being studied by Prof. Manning and Dr. Egerton) are among other amazing fossils found there. A working Paleo Prep Lab at the museum allows visitors to touch real fossils while paleontologists work on real bones and learn the stories behind them.

The Natural History Museum palaeontologist Sir Richard Owen first coined the term ‘dinosaur’ meaning ‘terrible lizard. The Natural History Museum Acting Director of Science Richard Herrington says: “The reports from the first excavations reveal it is an exceptional area for further scientific exploration - from the fossils already exposed, the quality of the discoveries so far and the existence of rarely-associated dinosaur trackways.”

Prof. Anne Schulp from The Naturalis Biodiversity Center stated, "Typical dinosaurs of the Jurassic include well known creatures such as Brachiosaurus and Diplodocus. It would be marvelous if we could bring one of those impressive beasts to Naturalis,”

The Jurassic Mile project is already utilising cutting-edge science from the international team. The University of Manchester scientist will use the Stanford Synchrotron particle accelerator along with some of the most powerful computers on the planet, to help resurrect the Jurassic and unearth the lost world and forgotten lives of the Jurassic.

Unearthing the secrets of the American ‘Jurassic Mile’