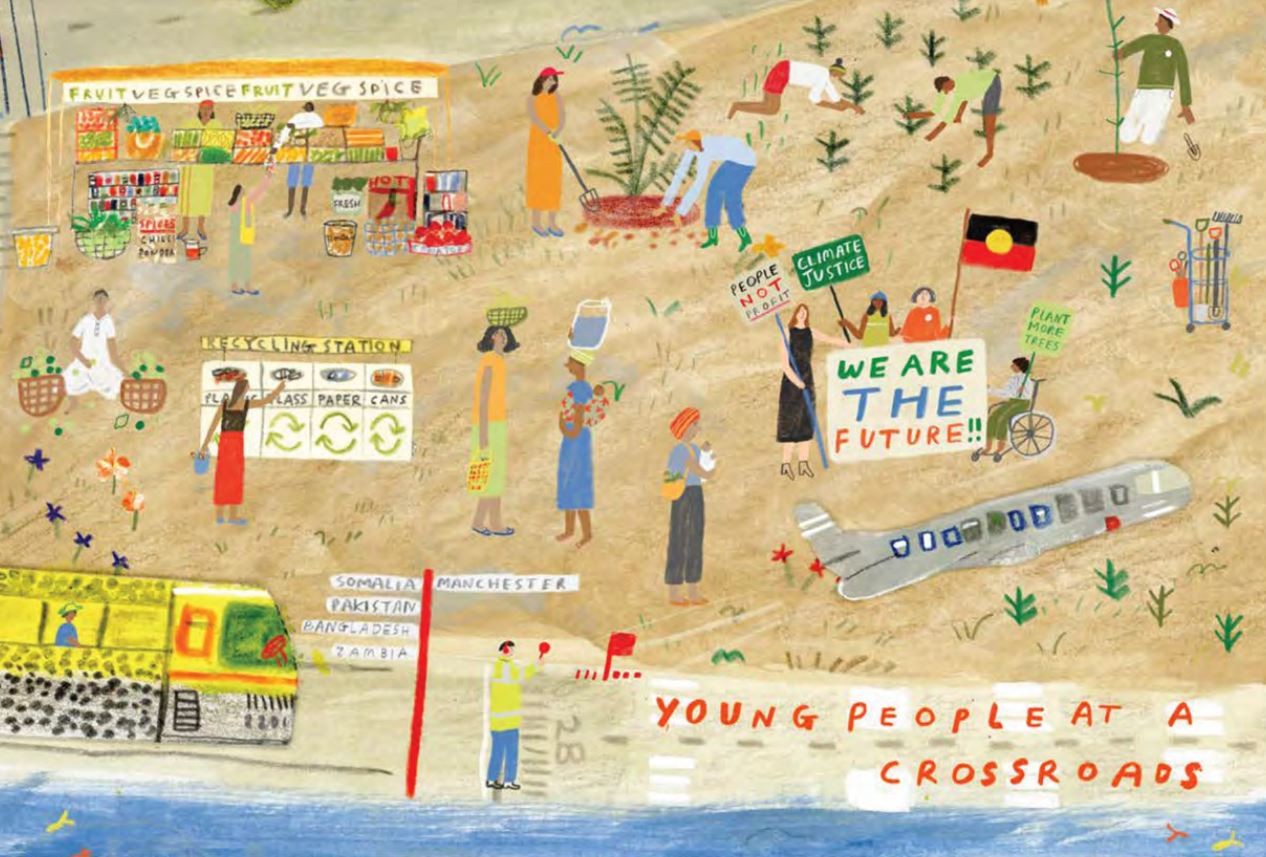 A beautifully-illustrated new resource has been launched which seeks to help teachers to address climate change in their classrooms using real-world stories in a creative, engaging and inclusive manner.

Social scientist Dr Catherine Walker from the Sustainable Consumption Institute at The University of Manchester co-created ‘Young People at a Crossroads: Stories of climate education, action and adaptation from around the world’ by speaking to teenagers from migrant backgrounds in Manchester and Melbourne, Australia. She wanted to find out how second and first-generation immigrants and other young people are learning and talking about climate change, particularly with family members who grew up in times and places where it had different relevance and degrees of urgency.

While the strong presence of a collective youth voice at COP26 has shown us that young people today are part of the most ‘climate-change aware’ generation, the voices of first- and second- generation immigrants from the Global South are often overlooked - this project is the first of its kind to rectify this omission.

For these young people, conversations at home around the climate crisis happen in a context where their parents may have first-hand experience of living with resource and climate uncertainty and developed their own ways of discussing and negotiating these situations. Yet, this knowledge is often not valued in the Global North.

The young people who took part in the project were given training to interview their parents, and were treated as ‘young researchers’ on the project. Their original reflections and interviews were collected and included in the resource, which was illustrated by Manchester-based artist Maisy Summer and comes with a guide to help educators adapt it to their needs.

In a blog post published for the Sustainable Consumption Institute - which supported the production of the creative resource - the researchers say that young people receive information about climate change from many sources, but often find this overwhelming and disempowering, particularly in how it is taught in schools.

They said they want climate change education which is focused on actions they can take to protect themselves and the planet, rather than just learning about the consequences of global heating. They also said they want to see action from their elected leaders.

As societies composed of diverse groups of people, we need time and space to share experiences and concerns, listen to and learn from one another, and engage in collective actions to reduce climate anxiety and address the challenges of climate change.

"I hope the creative resources from this project will inspire teachers, students and community leaders to engage in inclusive conversations about addressing climate change," she added. “It is also essential that teachers working across all subject areas are given more training on how to incorporate this challenging topic into their teaching, and that governments around the world treat this as a priority area for education."