Getting gender on the devolution agenda in Greater Manchester

Research led by Professor Francesca Gains set out to improve equality and diversity within the Greater Manchester Combined Authority (GMCA) and revealed the need for women in decision-making positions to improve policy action.

The need for improved representation for women

This was highlighted by Professor Francesca Gains, who demonstrated the need for equalities processes and improved representation in the new GMCA arrangements. 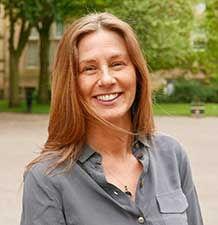 Francesca Gains is Professor of Public Policy and Academic Co-Director of Policy@Manchester at The University of Manchester.

Getting gender equality onto government agendas

Gains' impact started between 2010 and 2013 when her award-winning research Best Comparative Policy Paper by APSA Public Policy Section and International Comparative Policy Analysis Forum, alongside The University of Ottawa’s Isabelle Engeli and Manchester’s Claire Annesley, revealed that policy measures to improve gender equality are difficult to get onto government agendas. To combat this, women’s representation in legislatures and presence in executive roles is key.

Other research by Gains and Annesley also found that female politicians were more likely to be successful in bringing forward government measures once they had developed their own internal networks and equalities processes. This included devising ways to gather relevant evidence on equalities to inform policymaking.

Including female voices in policymaking

Research continued between 2012 and 2016. Gains and the University of Birmingham’s Professor Vivien Lowndes, as part of Understanding institutional change: a gender perspective (a European Research Council funded project), explored how police and crime commissioners prioritise (or don’t) the problem of violence against women and girls. Their findings further substantiated that having women in decision-making positions is key to policy action and reinforced the importance of equality in policymaking, evidence gathering and the reporting process.

In 2016, Gains further argued for the inclusion of women’s voices in policymaking in Greater Manchester. Her research influenced DivaManc, a campaign to develop the mayor’s commitment to a gender-balanced cabinet, laid out in his manifesto. DivaManc’s co-founder and councillor, Eve Holt, expressed the importance of Gains' research in "delivering tangible progress” such as in “the appointment of a female deputy."

“Having sufficient numbers of women – in all their diversity – around the decision-making table is an absolute necessity if the views and experiences of women are to inform policy.”

Bringing together policymakers and campaigners to implement change

Gains' more recent work brought together networks of policymakers and campaigners, including GM4women2028, to produce an influential research-informed guide on how to get women’s voices into policymaking: Mind the Gap. According to Deputy Mayor, Beverley Hughes, Mind the Gap established "a strong foundation upon which our priorities for turbo-charging women and girls’ equality can flourish."

Additionally, interventions by Gains, including the publication On Gender, brought together an evidence base on gender inequalities in Greater Manchester. This supported the establishment of more permanent governance arrangements through a Women and Girls’ Equality Panel in the GMCA, of which Gains was selected to be a member in 2020. This panel ensures that gender equality is actively considered in all GMCA decisions.

Communicating the gendered impact of the COVID-19 pandemic

Gains was invited to present a research briefing on the implications of COVID-19, and its lockdowns, on women’s employment in Greater Manchester at the first panel meeting in February 2021. She was subsequently invited to chair the panel’s working group on education, skills and employment.

Findings and analyses were also presented as part of a Social Market Foundations webinar on Gender and Productivity in 2020 and submitted to the Housing, Communities and Local Government Select Committee as written evidence. In the Select Committee’s report, published 1 October 2021, they cited Gains’ findings on the importance of taking equalities duties seriously.

Get access to experts who can provide research-informed evidence that impacts lives globally.