Giving a voice to singers and cultures across the world

Research at The University of Manchester has supported the professional development of natural voice practitioners and new trends in community singing – inspiring choirs and singing networks in the UK and beyond.

The natural voice movement is founded on the idea that everyone can sing and is committed to making singing accessible for all. The movement brings together non-auditioned community choirs and singers without prior musical training to learn and perform songs from diverse cultures. It provides an inclusive alternative to mainstream choirs, allowing aspiring singers who don’t read music to access the health and wellbeing benefits of singing.

The unique heritage of the movement and its connection with multipart singing in traditional societies had, until recently, been without the deeper understanding that would allow members to further develop their practice while also introducing natural voice singing to the wider public. 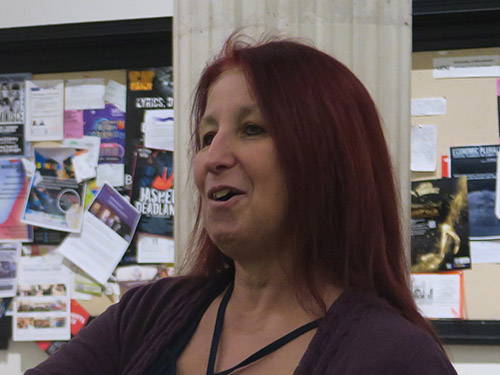 Caroline Bithell is Professor of Ethnomusicology at The University of Manchester.

Professor Caroline Bithell, Professor of Ethnomusicology at The University of Manchester, conducted pioneering research into the history, ideas and methods of the natural voice movement and its relationship with multipart singing in world oral traditions.

Drawing on first-hand research into multipart singing in Corsica, Georgia (Caucasus) and elsewhere, an important aspect of the research was the observation of interactions between native culture-bearers and student singers from diverse parts of the world. This helped to create new understandings of the way singing can create mutual benefits through cultural exchange.

Professor Bithell’s book, A Different Voice, A Different Song: Reclaiming Community through the Natural Voice and World Song, has since become an important resource for natural voice choir leaders and singers.

“I am grateful for everything I have learned from Caroline and it's her commitment to the Natural Voice Network that means hundreds more can benefit from her knowledge and experience.”

The Natural Voice Network is made up of more than 700 natural voice practitioners based in the UK, Europe, North and South America, the Middle East, Australia and New Zealand. Many practitioners lead multiple community choirs and also work with refugee communities, homeless people, and people in hospitals, care homes and prisons.

Professor Bithell explored the history and methods of the Network, providing new insights into the cultural contexts of their repertoires and practical techniques, designed to enrich the way songs are taught and performed. She also created professional development workshops and online resources for members.

The research has been received enthusiastically, with Network members describing its importance in affirming the significance of their work and increasing their confidence. The benefits have in turn been shared with thousands of amateur singers who participate in choirs led by Network members and others who employ natural voice methods.

Professor Bithell has also influenced broader networks of amateur and professional singers through workshops and lectures at festivals and intercultural summer camps. These include Giving Voice, the Narberth A Cappella Voice Festival and VoicEncounters in Poland (part of Wroclaw’s European Capital of Culture Celebrations in 2016), each attended by hundreds of participants.

The research is also a key reference for singing camps in Corsica and Georgia and online courses led by Village Harmony, a US-based association working in partnership with local teachers in countries around the world.

Discover how we can help you